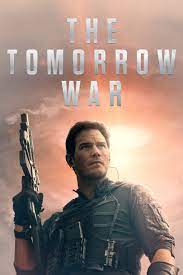 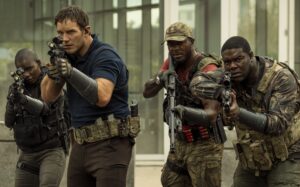 An okay alien invasion movie that has some interesting ideas baked in, but is just way too long and tiring for its own good.

Here’s the thing about this movie. There are three acts and each one of them is close to an hour long. Now that’s ridiculous. Acts 1 and 3 of a movie are supposed to be about 10-15 minutes. But this movie drags everything out, and just goes on and on. The aliens look cool, but there isn’t a single story element here that is especially smart or handled correctly. Yes, the action is sometimes fun, and JK Simmons is always great, but not is the story filled with holes and lapses in judgement.

The Tomorrow War is an Amazon Original movie based on a somewhat creative concept that gets applied to a very generic overall story. The generic story is alien invasion, or alien invasion in the future. The creative concept has to do with time travel and soldiers from the future coming into our present, looking for help. It’s enough to make a solid movie out of, if the time travel ideas were explored further and the story here was given more weight and development. But it isn’t. Despite a massive running time (two hours and twenty minutes,) there is still much that isn’t explored (like how these civilians are trained before being sent into battle,) which would have made the movie a whole lot better.

Let’s begin with comparing this one to other movies. First, there’s the title. The Tomorrow War is a terrible title considering that there’s another futuristic alien invasion movie, which even involves a sort of time traveling (repeating the same day again and again,) called Edge of Tomorrow. And that movie is well-regarded and even considered to be somewhat of a hit (it had a rocky run in theaters, but has since found an audience and cult following, mainly through word of mouth.) While the title The Tomorrow War sounds better than The Future War or something like that, a word of advice would have been to avoid using the word Tomorrow in the title at all costs. And then there’s the alien invasion premise. It’s so commonplace at this point, that you really have to get creative to be offering us anything new. From Cloverfield to A Quiet Place (As The Tomorrow War is being released on the streaming platform Amazon Prime, A Quiet Place Part 2 is playing in theaters,) these movies are all around. So aside from the title change, another smart idea might have been to release this movie in a different month. But no such luck.

Aside from the title and the release date, what’s also worth noting are the monsters themselves. These alien creatures are called White Spikes, and there movement on all fours nature combined with their animal-like form and attacks make them not too dissimilar to the creatures in A Quiet Place. Only these White Spikes have tentacles that wave around and shoot spikes at people. Well, the tentacles idea is very Edge of Tomorrow. It’s as if this movie isn’t even trying to get away from those two other films, and is actually hoping to use some of the good will that those movies built up with audiences to get some attention themselves (this would certainly explain the title’s use of the word Tomorrow.) Now, to be fair, the aliens do look pretty cool. Maybe they took the best parts of the aliens from those two other movies, combined them, gave them a bright white finishing and changed the head to an animal skeletal structure, complete with blood and skin falling off the face. It’s grotesque, but it’s also kind of cool.

And the movie doesn’t show these aliens at all for the first forty-five minutes. Not even a hint at what they look like. Now, forty-five minutes is only a third of the movie, so it’s not like the aliens are really held back for too long or anything like that. This isn’t Jaws or any other monster movie that waits until the end to fully reveal its creature to the audience (back in the nineties we got a whole bunch of these, from The Relic to Deep Rising, and they were all pretty bad.) Here, the first forty-five minutes might actually be the best parts of the movie. After all, once we start seeing the aliens they just bombard us with them to the point of overkill, where we don’t actually want to see them anymore. But in the first forty-five minutes, it’s all about the anticipation and also actually trying to understand the plot and how this all could make sense (or is supposed to, anyway.)

The movie opens with a Christmas party at Dan Forester’s house. He walks from the car to his house while taking an important phone call about a potential job offer, and then gets inside and talks to no one but his wife and daughter. It’s pretty strange to think that this party is supposed to be at his house, and yet he never even attempts to mingle or make small talk or even greet any of the guests. It’s as if whoever made this didn’t give any thought to what it’s actually like to be throwing a party. And then trend continues throughout the duration of the very lengthy scene, so that after Dan walks outside again and takes another phone call about the job (it’s pretty early for this movie to start repeating itself,) he comes back in and takes a seat on the couch with his wife and daughter, while all the other guests continue mingling in the background. This whole setup is a mess. It could have easily been solved by making the party at someone else’s house instead of his. But the movie isn’t interested in realism in the slightest. And it’s also not interested in giving us much setup. As he sits on the couch to watch the soccer game, a portal opens up on the field and soldiers from the future jump out.

The soldiers claim that they are in the middle of a war in the future, against an alien race that is giving off mankind. They have nearly run out of soldiers in their own time, to the point where they have jumped thirty years into their past, to this time they are now in, to recruit soldiers to come back with them. Why thirty years exactly, is never explained. What is explained is that the people from the future can only jump back to this one specific period. Why exactly? That one isn’t told to us either. We just learn that time is like a river between two rafts and each of these time periods is one of the rafts. You can jump from one of the rafts to the other, but that’s it. And time keeps moving forward for both rafts. All things considered, it’s a halfway decent analogy and explanation (if I have to see the pencil through paper demonstration of time travel one more time…Event Horizon, Interstellar, ect.

After a vast majority of soldiers who are brought into the future through a time link are killed, the government of our present time starts enlisting civilians in a draft. And of course Dan, who is now a high school science teacher, is drafted. That means he is called into a medical office, given a strange arm device which stays attached to him at all times, and shown his death sertificatw. Apparently he will die in seven years. This is meant to make him want to go fight the enemy. But it doesn’t. Instead, at the convincing of his wife, he drives off to an airplane hanger to see his father, James Forester (played by the great JK Simmons,) who he hasn’t spoken to in years. Maybe even decades. James is a man who lives off the grid and is involved in shady black market business. Currently he’s involved in removing those arm band bracelets from people without alerting the authorities. And yet, despite the being the sole reason that Dan drove out there to see his father, he leaves without asking the man to remove his for him.

Not long after this, Dan is sent off to training and then into the future. And the real problem here, is that there really isn’t training. We see one officer demonstrate shooting and fire on a target. We see another one tell the group that they can’t even see be shown what the aliens look like because they think once people see the aliens they will be too afraid to continue on the mission. That idea might make sense for not showing images of the aliens to the public, but once people are there training, and there’s no escape or running away, you show them the aliens. You get them as prepared as possible. But in this movie, characters are never even taught how to load a gun.

The jump into the future leads us into the second of three acts. Three acts is a general number that lots of movies have. The difference is in those other movies,  acts one and two three to be much shorter, and the bulk of the film can be found in act two. Here, all three acts are about the same length, and that’a a big part of the problem. The movie is too long. Everything that happens seems to take forever. And we really start feeling that in act two. Once the characters are dropped into the future (and they are literally dropped, to the point where many of them die just on landing, and Dan only survives because he lands in a tiny hotel rooftop pool,) they go looking around for the aliens. And for the longest time, they don’t find any. Then, after a long, long while of looking, the aliens finally show up and attack.

This act ends up becoming about fighting the aliens in the future, and getting a serum that can be used to kill the creatures. Dan is sent back to the past with the serum. And this becomes the third act. Back to his regular life, only now with the serum and no way to use it. The final act might be the worst of all, with our characters figuring things out way too conveniently. For example, one of the three characters who survived in the future happens to have a claw which has sediment under the nail. Another of the three happens to work at a job where he can analyze the sediment. And the third one is Dan, who gets an idea from his wife, that maybe the aliens are already on earth, and runs with it to the highest levels, as with he is suddenly sure that this has to be true. The final portions of the movie, where we get a little more JK Simmons are fine (any opportunity to get JK in there immediately improves the movie,) but for the most part this one is pretty dumb. And it’s a real shame, because there are some cool time travel ideas sprinkled about and then buried here, like how all the civilians sent to the future have died before the future date they are sent to, whereas all the future soldiers sent to the past are young, so they haven’t been born yet in the past time they are sent to. This makes it so that everyone can avoid time paradoxes – basically running into another version of yourself from a different time. Concepts like that are pretty interesting. But the movie isn’t big on exploring them, and generally uses one line to push them off to the side. As a time travel movie, this one had some potential. As an alien invasion movie, it’s pretty much a dud.