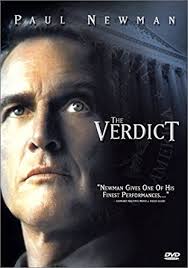 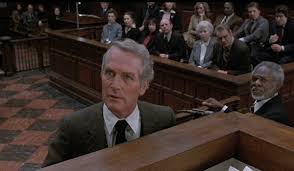 A great trial movie, that unfortunately only gets exciting in its second half.

The Verdict is another smart and powerful film from director Sydney Lumet. This is the filmmaker who gave us 12 Angry Men, Dog Day Afternoon, Serpico, and Network. His movies were legendary, and he even continued making great films like Night Falls on Manhattan and Before The Devil Knows You’re Dead, as he got older. The Verdict is one of those really interesting movies about a character who is so down on his luck, that he’s pretty much trying what could end up being his very last case, if he doesn’t pull it off. The only problem here is that the movie takes its sweet time to really get going, and that the second half is far superior to the first.

At the start of the movie, we meet Frank Galvin, (played by Paul Newman,) an alcoholic lawyer who is also an ambulance chaser. We watch him spend time in funeral parlors, visiting the widows during the funeral, and giving over his card. He wants them to call him about the possibility of malpractice. In one situation, the son of the deceased calls him out on this. Galvin tells the son that he was a friends of his dad’s, only the boy is not buying it, and ends up getting Galvin kicked out.

Back in Galvin’s office, things aren’t much better. He gets a visit from Mickey Morrisey, (Jack Warden, retiming with Lumet, his director from 12 Angry Men,) a fellow lawyer and a friend. Morrisey has a case he throwing Galvin’s way. It’s about medical malpractice where a pregnant woman went in the delivery room and ended up in a coma, because she was given the work anesthesia. That’s the case against the hospital, anyway. Morrrisey walks into Galvin’s office and sees the place is a mess. Galvin doesn’t look like he’s up to taking on any cases, whatsoever, and yet Morrisey gives this one to him, hoping it will help get his friend back on his feet.

And so Galvin begins looking into the case. He visits the victim, (his client,) in the hospital, where she lies in a bed, still in a coma. He takes pictures to show the lawyers on the other side, hoping to come to a settlement. And he meets with a witness who was there at the time of the incident and will testify to malpractice on the part of the doctors who treated the woman. The scene between Galvin and this witness is pretty good, with the witness telling Galvin that he’s willing to testify simply because it’s the right thing to do.

Galvin meets a woman at the bar that he frequents, and starts having a fling with her. This woman is Laura, (played by Charlotte Rampling,) and she plays hard to get at first. In fact, it’s not even until the second time that Galvin spots her there, that he is willing to really talk to him, and realizes that she kind of likes him. Laura ends up working for Galvin and Morrisey, as a secretary / assistant. He also helps give words of advice. She’s a nice addition to the team, and she really comes into play with a surprising revelation in the second half.

It all start when the side representing the doctors and the hospital offers a settlement, and Galvin refuses it. He doesn’t even tell his clients, (the sister of the girl who is in a coma,) about the offer, which is a definite mistake, but Galvin seems to be rejecting the offer for the right reasons. He goes to meet with the defense lawyer and tells them that he came there to take the money, but now he realizes that if he takes the money he’ll be lost. He now realizes that this is an opportunity to do what’s right, and to really show who he is, and what he believes in, and he’s not gonna just let that go for some money.

At about the halfway point of the film, Galvin’s star witness disappears, and the judge refuses his request for an extension. The judge doesn’t like Galvin much, and is especially angry that Galvin refused the defenses offer. The judge wanted to be done with this case and not have it go to trial, and he blames Galvin for having it end up in his court room. So Galvin gets another witness, and it’s a doctor who had nothing to do with the victim, other than that he was called in by Galvin and looked over the report of what took place. When this man takes the witness stand, it’s not even the other side that tears him apart, but the judge, himself. Overstepping his role, the judge decides to ask the witness questions, and then to make statements to the jury, based on what the witness has said. Galvin isn’t having this, and asks for a private meeting in the judge’s chambers, where he calls the man out.

Despite Galvin’s objections, the doctors ends up being a pretty lousy witness, and he even admits it afterwards. This leaves Galvin in a rut. The only other idea he’s got up his sleeve is this nurse who was in the operating room, and refuses to testify. Galvin is convinced that she knows something was wrong, since she is not willing to testify for the other side, on behalf of the doctors, either. He treats this situation like a mystery, using this one nurse to track down another nurse, who has run away from the profession as a result of what happened that day. It isn’t easy to track this woman down, but Galvin realizes as soon as he does, that she has sure got a story to tell.

The Verdict is one of those movies where the first half and the second half exist on plains so far away from each other that they almost feel like two different movies. The first half isn’t bad, but it’s slow and takes it’s time to show us anything significant. It’s the development portion of the film, and it seems to be in no hurry to get to the trial. The second half of the movie is the exact opposite. Suddenly things come to life, during the trail, and we get some amazing witness testifying scenes. This is a pretty intense movie, and it’s incredible fascinating. You just need to get past the first half to realize that.