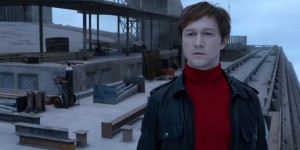 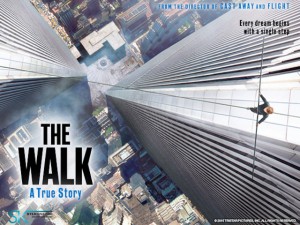 An entertaining film that really moves at a nice and energetic pace in the first half, but then loses its momentum and becomes a little too slow in the second half.

A cool movie that just loses its momentum and pacing precision in the second half. The first half of this film is spectacular. That’s where visual tricks, (such as having Joseph Gordon Levitt the entire movie from atop the Statue of Liberty,) are used for good, quick fun. So much is accomplished in that half, that it really does get us from the story of Philip Petit starting out as a wire walker, all the way to the place where he will walk across the Twin Towers. The problem is that now there is half a movie left, and all that is really left to do is have Petit get up on those towers and walk across them. Granted it takes some sneaking around in the construction areas of the building, to make all that happen, but the entire film suddenly becomes about this one big event, and the pacing slows down so significantly that instead of feeling exciting, it ends up feeling kind of tiresome.The movie is good, but the second half definitely loses some of what the first half had going.

The Walk is the Robert Zemeckis directed movie version of the story of Phillipe Petit, the man who walked on a high wire between the Twin Towers. There was a documentary film about this event, which came out nearly ten years ago, called Man on Wire. While both films tell the same story, The Walk is the better of the two, simply because of the way it explores Petit’s life before he took on the Twin Towers. Man on Wire, on the other hand, was  a little too technical and one noted. The Walk makes a point to really capture the man as a performer, leading up to the big event, and to explainwhat might have led him into taking on such a feat. Those end up being the best parts of the movie.

The film is directed by Robert Zemeckis, who is a technical wizard. This is the guy who made Back To The Future, Forest Gump, and Cast Away, not to mention CG motion capture animated films like The Polar Express and Beowulf. Like James Cameron, Zemeckis prides himself on exploring the medium and how far he can reach with it. If anybody could make a movie about this subject, utilizing technology to go up and down the sides of the building, it is Zemeckis. He is a hell of storyteller, proving that he’s still got all the skill and ability he started out with. He proved this just a few years ago, when he made the Denzel Washington movie, Flight, another visually stunning, but also dramatic film.

And yet, despite the strengths that the movie The Walk has going in, (Zemeckis, the cool story,) with the Walk, something is also kind of missing. Like the documentary version, the first half works much better than the second half, and the second half of the movie is of course, meant to be the big highlight. If given a one sentence log line for this film to summarize and encapsulate what is most important, the logline would of course claim this to be the movie about the man who walked across the sky, from one tower to the other. And yet, the walk, which Petit became famous for, happens to be one of the more dull parts of the movie. At least it becomes that way after it has gone on for a while. It’s the first half, leading up to this, where the movie truly soars.

The reason why the first half works so well is because it moves quickly. The pacing there is perfect. Joseph Gordon Levitt plays Petit, and he narrates the entire film from a perch on the torch of the Statue Of Liberty, looking out at Manhattan. Many movies start and end with somehting like this, but what’s impressive here is that Levitt does it throughout the entire film. You could consider it like chapter introductions. And he’s always in the same spot, on that Statue of Liberty torch. The only change is that when we are in night time scenes in the movie, and we cut to Levitt on the torch, it is nighttime there, as well. This turns out to be pretty neat. Add that to the quick pacing in the first half, and exciting momentum, and its no wonder why the movie gets off to a great start.

The first half of the movie works so nicely because it keeps on moving. We are with Petit, the young man, as he performs tricks on a tight rope above his backyard, to the dissatisfaction of his parents. Petit doesn’t care. He enjoys this and it feels natural to him, not only to be up there, but also to entertain others with it.  Petit performs all over Paris, first as a street performer, looking for an area where people are already gathered, sitting on benches. That’s where he takes out a little rope he carries around with him, holds it in front of his eye, and imagines if he can hang a rope between two spots in the area and walk across it. Listening to him talk, (in those Statue of Libertry narrations,) about the places where he can hang his rope, turns out to be both funny and charming.

Petit creates a circle, that he draws with chalk on the ground, and he expects his viewers to stay outside of the circle. While he’s in there, Petit does all kinds of tricks, including riding a unicycle around and juggling. At one point, director Zemeckis takes us up into the sky along with the pins that Petit is juggling and allows the camera to just hang there, with the pins coming right at the screen. In 3D this must have been amazing. Even without that way of viewing the movie, the shot is very cool. And Petit values the sanctity and sacredness of his performing circle, so much so that if any audience member even steps on the line, Petit rides his unicycle around and intentionally runs over the person’s foot.

All of this boils up to a woman who is a musical performer, playing the violin in the same area, confronting Petit about taking over her spot. She was there first, and she had a crowd going, listening to her music. Now that Petit has come in, he has taken all of the attention away from her. When the woman confronts him, Petit makes her play a miming game to get him to step out of his circle, and only once he has stepped out of it, will he actually talk to her. He gladly agrees to leave the area. He has already gotten enough attention that people are starting to know him, and if he moves to another area nearby, word will spread that the guy from the old spot is now here. He has also now gotten the attention of the woman, who soon becomes his girlfriend.

Another major character who has an important role in the first half of the film is a circus owner, Papa Rudy, (played by Ben Kingsley.) Petit wants to start practicing on a high wire that is actually a good distance off the ground. He sneaks into a circus tent, owned by Rudy, and continues to do this and practice, until one day he is caught. He and Rudy strike up a friendship, with Rudy acting more as a mentor and teacher than as an adversarary. Rudy teaches Petit all about the art of the performance, including the taking a bow while on the high wire, trick. Rudy is pretty much nowhere to be found in the second half.

That second half, is where the movie suddenly becomes about one singular event and slows down significantly. In the first half, Petit took on the Notre Dame Cathedral in Paris, and that event took all of ten minutes. The World Trade Center walk, on the other hand, takes closer to an hour. First there’s everything involving putting the pieces together in NY to make it an actual possibility. This includes getting all of the equiptment and doing all the research. Some of it works, some of it doesn’t. When the guys try to weasel their way into the elevator and have to negotiate with the foreman in order to do so, it’s pretty cool. But when Petit and one of his friends get stuck under a tarp while the security guard walks around, it starts to feel a little too drawn out. The same can be said of the final walk. It’s pretty cool at first, but boy does it go on for a long time with Petit constantly walking back and forth from one end to the next. Every time you think he’s about to get off, he just turns around and walks back over it again.

The Walk is a good movie, but its far from great. Like Flight, there is only one scene that is technically amazing, and the rest is just dramatic or whimsical fun. The difference is that in that movie, the exciting scene was at the start of the film and everything after it became a sort of tense mystery. Here, the big walk is saved until the end, at it ends up being so long and tiresome that it drags the movie down. There’s nothing terrible about the actual walk, but it just isn’t firing at the same level as the rest of the movie, which moved at a nice, quick pace. This film hits the second half, moves the characters to New York, and suddenly slows down to about half the pace it was going at before. The difference is definitely felt.