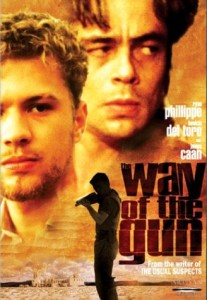 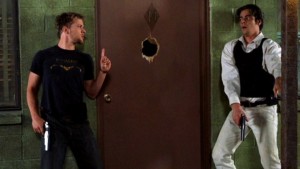 An occasionally funny crime thriller that isn’t as twisty or creative as it should have been.

Christopher McQuarrie’s a strange guy. he’s the director of this movie, and it’s his directorial debut, but the thing is, he hasn’t really written much either. at least he hadn’t when this movie came out. in 1995, he wrote the usual suspects, and it was his claim to fame. the movie not only launched directory bryan singer, as well as a handful of stars from kevin spacey (he won an oscar for that film) to benecio del toro, but it even launched the writer. mcquarrie didn’t follow up suspects with another quick screenplay turned movie, the way some of the hot screenwriters like charlie kaufman did it. instead, he waited and developed a movie to direct himself.

that movie is The Way Of The Gun, and it’s a shame that it isn’t any better than it turns out to be. mcquarrie has definitely got talent, but with suspects he not only gave us humor and excitement, but also mystery. that’s the element that is missing here. there is no legend, and scary crime boss in The Way Of The Gun. there are only low level, stupid criminals.

those criminals are mr. parker and mr. longbough (played by ryan phillipe and benecio del toro). phillipe narrates the movie at the start, and does a strange sounding voice that is a little annoying. still we go with it, as his mr. parker takes us into the world of the criminal society and explains what he and his partner are doing there.

the dialogue and voice-over narration are very well-written. there’s no question that mcquarrie as a screenwriter has a way with words and he puts them in his character’s mouths nicely. that enables the movie to open up strongly with the voice over and setup scenes. we get that these two guys decided to get off the usual path that was set out for them and that while on the road, they had a limited amount of ideas. this led them to blood banks and semen freezing labs to donate for money.

the real story doesn’t start until they are at one of these fertilization clinics and overhear a secretary talking about a woman who is coming in that is worth a lot of money. the woman is robin (juliette lewis) and she is carrying the baby of a very wealthy couple. the man whose baby she is carrying is named hale, and he’s got ties to some illegal operations. if he pays the kidnappers the money, than apparently people are going to be asking where he got the money from and are going to be looking closely at him and his associates.

so instead, his associates hire another man, a sort of cleaner, named joe, played by the always reliable james caan. this guy knows every angle of the business and he’s the actor, more than any other, who is right at home in this film. caan has a wonderful conversation with del toro, that is almost modeled after the sitdown scene in heat between deniro and pacino. these are two guys from opposite sides of the game, who in any other situation would be out there hunting each other, but for one brief moment they take a timeout to talk to each other about the way the job works. and they are totally honest with each other.

aside from joe, the couple whose baby it is have other people working for them too. there are two bodyguards who protect robin at all times and take her everywhere she goes. those bodyguards are played by taye diggs and nicky katt (quite the all star cast in this movie). the scene where mr. parker and mr. longbough kidnap robin and get her away from these two guys is a lot of fun.

during that scene, the characters pursue each other in a garage with shoot outs, but then take to their cars where they go on a chase. there is no losing anyone here, and so our two kidnappers carefully put their car in neutral and jump out, firing away at the guys in the car behind them. that means those other guys have to jump out of their car to fire back. and the kidnappers wait for the car to roll up to them (since it is in neutral, it is still moving, slowly), and then hop back in and drive off. this is a clever enough situation, but what makes it especially fun and humorous is that it happens twice in what is pretty much the exact same way. watching the bodyguards’ expressions as our kidnappers try the same exact thing for the second time, is priceless. it’s like, “you’ve got to be kidding me? They’re doing that same thing again? Don’t they realize we’ve already seen it and we know what they’re gonna do?” of course the kidnappers use this to their advantage in order to get away.

if there had been more scenes like that, this movie might have worked. more action scenes that were memorable could have propelled it along. either that or a creative plot. the plot of this movie is very much a seen it before kind of thing. yes, there are slight twists and turns about who is sleeping with who, and whose baby the one inside robin really is, but they all add up to the kind of moments you would expect to find in a soap opera.

The Way Of The Gun does work on some levels because it has interesting characters and is well-written. the two kidnappers as well as the mr. fix it guy, joe (basically mr. wolfe from pulp fiction, only he actually uses weapons here), are all interesting characters. the storyline might not be anything special, but it still works. it gets us from one point to another, and some of those points are kind of fun. the movie could have been a lot more creative, and even some of the action scenes should have been better, but it’s still an alright film.