The Way Of The Dragon ** 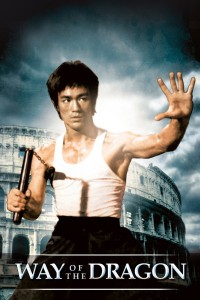 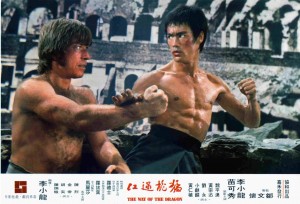 Not nearly on the same level as some of Bruce Lee’s better films like Enter the Dragon and Game of Death, this movie goes more for comedy than it does for action, and the story is very basic at best.

There might be a pretty average story on the line here, but a Bruce Lee movie is about the action, and the action here is pretty good. He’s a unique fighter who not only has the moves and ability, but also the noises to go with them. Some of these noises are background sounds, like the crack of a whip whenever Lee kicks someone. Others are the sounds that Lee makes himself, as he exhales after delivering a blow. The movie starts off seeming like a comedy and luckily it changes direction to give us more what we’re looking for. Bruce Lee movies are always dramatic adventures. This one is a little more tame than usual in terms of story. It’s simply about an Uncle who owns a restaurant in Rome and sends for his nephew to help out against a gang that is demanding payments. Lee shows up and puts them all into shape. The setting here is Rome, and while some of the scenery feels forced, it definitely adds to the palate of things going on in this film. Especially when we get the climactic showdown in the Colisseum.

The Way of the Dragon is not a very good Bruce Lee film. It’s a movie with a lousy story and action that is fine, but not nearly as good as it is in Lee’s other movies. On top of that, there is some confusion about whether this is a sequel or a prequel to the great Bruce Lee movie, Enter the Dragon. The truth is that it really shouldn’t be considered either, since the two films have no connection to each other at all. Lee’s character in this movie is Tang Lung. His character in Enter the Dragon is named Lee. And that movie is about a character who goes to a mysterious island to fight, whereas in this film he helps out with his Uncle’s restaurant that is being threatened by gangs.

The story to the movie is very simple and pretty weak. There is a man named Tang Lung (Lee) who comes to Rome to help out with his Uncle’s business. Lung’s Uncle owns a restaurant in Rome, and has sent word to his nephew that he needs help.  Setting the movie in Rome is a bit unusual, and in fact, it is one of the only things that makes this movie memorable. Rome is a fantastic location for movies so long as the movie doesn’t make the story about going to see the monuments, and instead makes the monuments a background. Movies like Roman Holiday and Angels and Demons did it right. Unfortunately The Way of the Dragon doesn’t. In the first few minutes of the film, Lung is being driven around by his Aunt, and the two of them pass nearly every monument imaginable, in their convertible. From The Trevi Fountain to the Coliseum to the Four Rivers Fountain to the statue of Marcus Aurelius on horseback to the Castle that Romans refer to as The Wedding Cake, it’s all in here. Even Piazza Du Popola. The only thing missin is the Spanish Steps. The movie would have benefitted from spacing some of these monuments out, instead of throwing them all in at once, during one quick drive at the start of the film.

The storyline has Lung called in because his Uncle’s business is met with threats from the local mob. They demand payments and the Uncle doesn’t know what to do. Considering this storyline, it’s strange that the movie takes so long to get to the action. The first quarter or so of the movie feels more like a comedy than an action film. The music is bouncy and goofy, like you might expect from a Jackie Chan film, but with Bruce Lee movies they are generally meant to be pretty serious. This one is different. There’s a scene at the airport, in the very beginning, where an older woman stands next to Lung, staring at him right in the face, and it is kind of funny, but also feels a little out of place. That’s the sort of thing that we get a lot of in the first half. Quick zoom ins and closeups to make things seem funnier than they actually are. This movie was made in the seventies, and you can definitely feel it with the music, tone, and camera movement choices they make.

Tai Lung is picked up at the airport by his Aunt, who is about the same age as him. Then they drive off, and this is where we get that montage of all of the sights and monuments of Rome. When they arrive at the restaurant, it’s all just friendly greetings and embraces. The gang doesn’t show up for a while, and when they finally do, we are ready for some action. We get it. Lee takes out the different members in the restaurant and reminds us almost instantly of why he is such a unique talent. Nobody kicks, punches, or makes noice the same way that Lee does. He’s a ferocious force, and a hell of a lot of fun to watch in action.

Another fight follows shortly after this one and it’s outside in the back alley behind the restaurant. Lung picks the gang members off, one ny one. Instead of taking him on as a bunch of them against one of him, all attacking at the same time, they take turns going at him one at a time and he cuts them all down. The sounds in a Bruce Lee fight are absolutely fantastic. From the whip cracking sound that flies through the air whenever he punches or kicks someone, to the noises he makes with his mouth, Bruce Lee action is always a blast, and its great here, just like usual.

The workers at the restaurant are inspired by Lung. They come up to him praising him, and the next time he sees them, these guys are all in karate robes, ready to train. Only we don’t really get to see their training. That happens off screen, so that the movie can stay with its central plot, about this crime boss who keeps sending out ment to threaten Lung’s Uncle. The movie would have benefitted from showing us this training and also from giving some of the employees of the restaurant individsl peronalities and names. It never does any of that. Instead, this film is all about getting the bad guy.

That leads Lung to go find the head boss in his office. The boss has recently hired an assassin to take Lung out while he is in the apartment where he is staying. This assassin stands on the rooftop of a neighboring building at night, with a sniper rifle, and takes some shots. Of course they miss. And this leads to Lung going to find the man who hired the assassin in his office.

An American is called in who is a legend. This man is played by Chuck Norris. I like how before Chuck Norris is called in, the two top guys in the gang are fighting it out to see who is really number one. When Norris shows up, one of those guys backs down immediately and the other challenges Norris, only to get his butt kicked. The one who backed down was apparently once a student of Norris. Now that the boss was willing to pay to bring in such an incredile fighter, it’s only a matter of time before he and Lung will square off.

This final fight, against Chuck Norris, takes place in the Colisseum. It’s an impressive location to have a showdown, and of course completely unrealistic. The Colisseum is a tourist attraction that you have to pay to get into. Even then, it is not secluded by surrounds by and packed with tourists. So you can’t just run in there to have a fight. Still it was the seventies when this movie was made, and allowing it some artistic liberties with this one, the setting for the fight is pretty fantastic. The fight itself is pretty good too. Like all Bruce Lee movies, this one does not disappoint when it comes to action. There could have been a little more of it in the film, especially in the first half, but once it gets started, Lee goes on a nice roll of kicking butt. The storyline here is pretty weak, but you don’t go to a Brice Lee movie for that. You go for the action, and the action is a lot of fun.