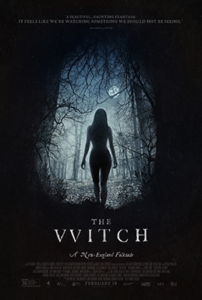 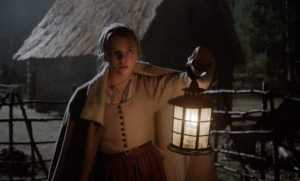 A pretty lousy movie, this one isn’t very scary at all, and is much more an attempt at being psychological, and about the people, then about the scares.

Not a vert good movie at all, for most of the way through we’re just trying to understand what’s going on and make sense of it all. Only there’s really not all that much to make sense of. A family moves out to a cabin at the edge of the woods, and members start disappearing or dying. Sounds scary, right? It should be. Only it’s not. Instead, trying to decipher the old English tongue that this movie was written in becomes the big challenge, and the things that happen take place matter of factly, as if that’s just how it is, nothing to see here or be surprised about at all. In other words, this same story could have been made a whole lot better if it’s big moments had been treated as scares. But instead, this movie is mostly dull until the family members starts turning on each other and we get an only moderately exciting conclusion. The best way to describe this movie is incredibly strange, and more interested than art than in horror, or any other genre.

Talk about a weird movie. The Witch is a movie about a family in the times of early settlement in America, such as Plymouth. This predates Colonial times, and is about a time when people were ultra-religious, to the point where they believe everything is either because of god or because of the devil. And the movie is about this family, that has moved away from the community and secluded themselves in a small cabin in the middle of nowhere. Sounds like the perfect recipe for some scares, right? After all, a cabin in the woods setting is a classic horror movie setting, whether it be Evil Dead and Evil Dead 2, Cabin in the Woods, or Cabin Fever. But this movie is something different, and something far worse than any of those other movies. It is worse because it doesn’t have a whole lot of story, and it certainly doesn’t have a whole lot of scares.

At the start of the movie, we are with the family as they stand before a council inside of a Church, being judged. William, the father, has spoken out agains the Church, believing it to be filled with corruption, and now the family risks being banished. Only that’s exactly what William wants. And so he tells the members of the council this, and they tell him to leave, and not trouble them with his problems with the Church anymore. So William and his family pack up and leave and head out to this cabin at the end of the woods.

By this point, it’s already very clear that the characters are speaking in such a unique dialect that it almost feels like a foreign language. The words choices they use is so difficult to understand at times, that subtitles for this movie really go a long way. This is one of those movies where understanding and deciphering the language is one of the best things about it. And getting a little cliff’s notes version of that, in the form of subtitles, to help one actually see and appreciate the writing, is an invaluable tool. We learn, as the characters go out to the woods, that they all support William’s decision, and that there really isn’t any argument. And so they begin to settle into their new home.

It isn’t long before bad things start happening to the family, that includes William,  his wife, Katherine, his oldest daughter, Thomasin, the middle child Caleb, two younger twins, and a baby. One day, while Thomasin is outside with the baby,  near the woods, she turns away from him for just a moment. When she looks back, the baby is gone. Missing. Some members of the family say the baby was kidnapped by a Witch. Others believe the baby went to the devil, because he was never baptized. Nobody knows, and it’s pretty creepy.

It isn’t long before William and his wife realize they have a problem. The crops are not growing here. Whatever they are able to get will certainly not be enough to last them through the winter. And so William decides if he can’t grow their food, he will hunt it. He takes Caleb out to the woods, and the two of them have a heart to heart. They talk about what happened to the baby and what William thinks. And yes, he says the baby deserved it, because he wasn’t baptized. As if it was the baby’s decision. William also tells Caleb that he traded their mother’s silver cup, which has meaning to her, for the weapons they are using to go hunting. This becomes a plot point later on.

Back at the cabin, the twins go on and on about Black Adam, their goat, and how he talks to them. For some reason, Thomasin gets it into her head to scare on of the twins and pretends to be a witch. Granted, this is probably just kids having fun with each other, but Thomasin takes it too far, really freaking her little sister out. And this action has repercussions that will play out through the rest of the film. That night, Caleb and Thomasin listen in on their parent’s conversation, in another room, about what they are going to do to solve their food problems. They talk about sending Thomasin off, to live and work for another family. That will be one less mouth to feed.

When Thomasin and Caleb hear this, they enact a plan. They will go into the woods and hunt themselves. Caleb will catch the animals that he was not able to catch with his father. While out there the other day, he and his father set traps, and now Caleb will check the traps, bring back food, and his sister won’t have to go live with another family. Thomasin decides to go with him. Only once out there, in the middle of the woods, the two of them get separated. Thomasin makes it back to the cabin, but not Caleb. He gets seduced by a young, good looking woman who is a witch. No words are spoken here. We just see the woman approach Caleb and kiss him.

When Caleb returns to the cabin, days later, he is ill. There is something inside him, causing him lots of pain. The family gets him up on a table, to try to help him, and Caleb dies. This is the closest the movie comes to possession. But now, all of a sudden, the family members start turning on each other. The twins tell their parents that Thomasin is a witch, remembering the joke she played on them the other day, (although the twins didn’t know it was a joke.) Thomasin retaliates by telling her parents that the twins are witches, because they speak to Black Adam. And William’s reaction is to lock them all up in a barn with the animals for the night, and see what comes of it by the morning.

When morning comes, it’s all out war with family members being killed left and right. This is the one exciting part of the movie. Everyone is out to kill everyone else. And by the end of it, Thomasin is left wandering in the woods, for one final surprise. the ending might be the most exciting part in the movie, but it’s still not very good. Especially when all you head about this movie, and every time you hear about it, people mention, “Black Adam,” and it turns out Black Adam is a little nothing. They make it seem like this creature will become possessed and start flying around and talking, like the goat in Drag Me To Hell. Instead, we get only the smallest hints of that. I don’t want to give away what happens, but let’s just say it is incredibly disappointing, and way more in the vein of artistic than in the vein of scary.

And that’s pretty much the story with this movie. It really isn’t scary at all. And the story doesn’t really go that far. Family moves to the woods, can’t grow food, thinks about sending girl away, boy goes missing and comes back sick. Then family members turn on each other. The turning on each other is definitely the most interesting material. It’s amazing to watch William really question whether his daughter is a witch or not. But it’s pretty much the only part of this movie that is any good. The first half is slow, but if it was building up to something substantial, then it would have been okay. The big letdown has got to be the second half, where nothing really interesting happens. Yes, a number of the family members die, but none of the deaths is very exciting or creative (other than one, involving an animal.) This movie is more slow and dull than anything else. If it had scares in it, they would have helped a great deal. But it doesn’t and the movie suffers the consequences of looking like a horror film, but not being very scary at all.