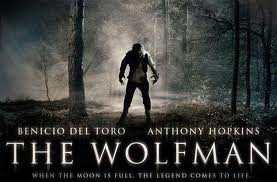 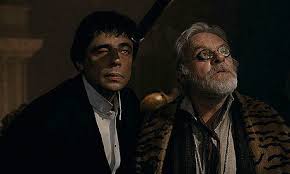 Good computer effects and a campy plot make this movie watchable and fun in a B movie sort of way.

The Wolfman was surprisingly enjoyable despite some pretty lousy acting and characters who you couldn’t really care about at all. it was enjoyable because the action was so visceral and exciting and because the story had interesting twists that left you wondering and wanting to see more.

The plot began very simply, with a man coming home to london, after years of being away in the states. He was coming home for his brother’s funeral, and then to find out how and why his brother was killed. As the movie began, i found myself wondering how benecio del toro was going to do a british accent. I mean, even in snatch, where almost every character had a british accent, he played a hasidic jew. Well, the wolfman solved that problem by having del torro from american, doing an american accent instead. And it worked just fine.

Upon his arrival at the london mansion, del torro’s character, lawrence, is greeted by his father, the great anthony hopkins. I’m glad they got him to be in this movie, because even though he isn’t great here, there’s no actor in the world who could have been a better choice. Hopkins seems cold and unfriendly, and sure, his son has just been killed, but there seems to be more than that. Maybe it’s because lawrence has been away for so long that he and his father have grown apart and have bitter resentment towards each other.

Lawrence goes to see the body of his dead brother and we get our first cool moment of the film, as a sheet is pulled back to reveal a half-eaten, totally ripped apart, body. it’s gross, but it’s quick, and it’s certainly unexpected and a pretty wild visual. And now Lawrence has questions. he goes to a local bar and hears what the people are saying, but it all seems too ridiculous.

So he goes to a campsite, trying to make sense of a locket that was found on his brother’s body, and there he sees the wolf. It attacks the campsite, and kills many men in what becomes a very exciting action scene. Lawrence chases after it with a rifle and gets some good shots at it, but not enough. I love that this wolf attack scene is nice and lengthy, as opposed to being a one second thing. We see the wolf attack and kill numerous people, and each time, it’s a surprise, out of the shadows. There’s one guy who tries to kill himself, but is out of bullets. The Wolf takes his head. And Lawrence is attacked as well, and suffers a bite to the neck.

Now it’s recovery time. Lawrence starts spending some time with the widow of his brother (emily blunt), who comes to visit him, feeling grateful and possibly responsible for putting lawrence in harms way. His father comes to visit him too, and the doctor’s are in great disbelief at how it seemed like lawrence would be losing the arm, but now after only about a week, he looks good as new.

Lawrence becomes a wolf himself. We knew that would happen as the initial premise of the movie. But what’s cool is that the movie goes on much further from there. Yes, his transformation scene is pretty remarkable. The creature effects were created by rick baker who did all of the men in black stuff. He’s the computer monster guy from the last twenty years, whereas stan winston was the makeup monster guy. And this wolf, and the way lawrence’s body becomes it, each bone and joint snapping into place, is very carefully orchestrated. The computer effects do not get in the way like I thought they might have. It just looks cool.

But all of this is not saying what’s so good about the movie. Yes, the action and the visuals are some of the better things about it, but the story is so much more creative than one might have expected. I thought this whole thing would be about lawrence as the wolf. Turns out, the movie doesn’t forget that there was another wolf before him, the one who bit him to begin with, and allows us to uncover who that wolf was.

Who it turns out to be becomes a very interesting plot twist, especially because of what it means about the death of lawrence’s brother. And then there’s an interesting back story, told through brief flash back, about lawrence’s mother and how she died. Maybe this is the reason for the distance between father and son.

Hugo weaving appears as a scotland yard agent who is tracking the wolf down (this guy is always playing an enemy agent). I like how instead of hiding that his son is a wolf, hopkins turns his son in. And i really liked the science experiment lecture room scene where lawrence is put on display like the elephant man (another hopkins film), and the action scene that follows. This movie has a lot of raw energy to it, and that’s what gives it it’s drive. But it also has a pretty decent story too. There are some slower segments to the film, and that holds the movie back from being great, but it is still a lot of fun, and about ten times better than i would have ever expected.