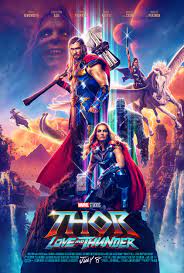 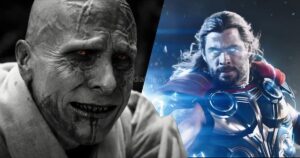 A fine action movie, this one isn’t nearly as funny or clever as the last Thor movie (Ragnorak,) by the same director, and lacks in more ways than it should, but it’s still an okay film.

This is an okay movie. Its not nearly as good as Ragnorak, which was by the same writer and director, but it still has plenty to enjoy. Specifically the action and the music. Other areas here are more hit and miss. Some of the humor works, some of it doesn’t. The world building of the Thor movies is always fun, but here it isn’t taken far enough. And the villain is just okay.. Director Waititi leans hard on Guns N Roses here, and gets a lot out of them here, with the music. Thor is always a fun character, especially when he’s giving us humor, and so it’s an enjoyable movie that just could have been sharper.

Thor: Love and Thunder isn’t as cool as it should be. The promotional materials for this movie make it look like pure 80s fantasy, what with its great title, its image of Chris Hemsworth wearing a Big Trouble In Little China sleeveless undershirt,  and its Guns N Roses rock n’ roll soundtrack. But other than the soundtrack part, the rest is sort of false advertising. Especially the title, which only comes into play at the very end of the movie. This one is 80s themed. Neither was the last movie, Ragnorak, either, (and that one also made it look like it would be in the trailer,) but that movie had so much going for it, starting with the teammup of Thor and Hulk. No Hulk in this movie equals a much lesser film. We do get returns from other characters, such as Korg, the rock creature (voiced by director Taika Waititi,) and Valkyrie (Tess Thompson,) but the closest there is to a replacement for Hulk here is Jane, played by Natalie Portman, and much as Portman is a good actress, she’s no substitute for Hulk.

The storyline here is that Jane becomes her own version of Thor, calling herself the Mighty Thor. This is right out of the comics, where Jane became a female Thor. And it’s a fine idea for a movie, but for it to be the main selling point of the movie is a little much. The other main point is Christian Bale’s villain, Gor The God Butcher. Like Portman, Bale is a terrific actor. He has gone extreme with weight gain and loss and commitment to roles in way that nearly rivals Daniel Day Lewis. Between the Machinist, The Fighter, and American Hustle, Bale has really transformed himself and it has definitely added to his performances. Getting him as the villain here is a definite win for the movie. That being said, they don’t really give him enough to work with. Yes, the story of how he lost his daughter and the gods didn’t care makes lots of sense, but we don’t really see the way that Gor has turned evil after this. He’s called the God Butcher, but we don’t really see him kill any gods (other than the one, at the very start of the film.)

Gor’s story with his daughter is meant to make him a sympathetic villain. Marvel movies have generally given us their best villains when they are characters that we can relate to, or that seem like they are making reasonable arguments (Killmonger in Black Panther and Thanos in the Infinity War films.) But just saying that the gods didn’t care when Gor lost his daughter, and didn’t help him at all, seems a little too simple. On top of that, the look of the character isn’t nearly as cool as it should have been. In the comics, Gor is an alien – lizard like creature with no nose. Here, he looks like a human with his skin painted all white. Taika Waititi has gone on record talking about this, and about why he did not make the character missing a nose. Waititi claimed that it would have been too similar to the villain Voldermort in the Harry Potter movies. Really? If that’s the case then you make him look as different from Voldermort as can be in all other ways. You use the comics as a frame of reference for what he can look like and you play around with that. But you don’t abandon the one thing that made him look incredibly cool and different. The truth is, Waititi was probably afraid we wouldn’t recognize Christian Bale as much without his nose (sometimes hiding a name actor in too much makeup is not a good thing, just look at Idris Elba as the villain in the third Star Trek movie, where he was unrecognizable.) Still it would have been incredibly cool to have Gor look something close to the way he does in the comics, and they completely abandoned that idea in this movie.

While Gor doesn’t work out great as a villain, and Portman is hardly a replacement for Hulk, there are plenty of things in this movie that are worthwhile. Starting with the first time we see Thor, hearing Korg recap everything that happened to Thor in the first three movies in a humorous way, as he tells the story to children is a lot of fun. It’s kind of like in Frozen 2 when Olaf tells the story of Frozen 1 and includes his own opinions and commentary on what happened while telling it. Korg does the same here, and at one point he talks about the Warriors Three dying and says, “then this guy died, and then this guy, and this guy,” in a way that is really funny considering how easily Waititi disposed of these characters in the last movie.

Also, at the start of this movie, we get to spend a little bit of time with the Guardians of the Galaxy. Now, that’s something which was set up the last time we saw Thor, in Avengers: Endgame. The Russo Brothers, along with their screenwriters, Marcus and McFeely, had the good sense to team Thor up with the Guardians at the end of that film. And this movie reaps the benefits of that decision by having the Guardians present early on, with Thor and them fighting off intergalactic enemies. Only the punchline is that Thor does everything himself and is not a team player. Pretty soon Thor finds out about Gor: The God Butcher and decides to pursue him, while the Guardians go their separate way.

Another thing that’s kind of cool is the reasoning behind Jane being able to hold and wield Thor’s hammer, Mjionier. In past movies, a big deal is made about how nobody besides Thor can lift the hammer, only here, Jane does it with ease. We see flashbacks to Jane and Thor spending time together back when they were dating, and one night after Jane has fallen asleep, Thor tells Mijioner to always watch over her and protect her if she is in trouble. Now, when you think about that, it’s a little strange, considering the Mijioner is supposed to be with Thor at all times… like why can’t he protect her? Why is he calling on his hammer to do it. But I suppose the idea is that what if Thor and his hammer are in different places? And so when Jane gets cancer, and then goes to see the pieces of the hammer in an encased display in New Asguard, the pieces form back together and Jane is suddenly able to life and use it. Only the hammer doesn’t make Jane better. In fact, it actually speeds up the cancer and only makes Jane worse, so why it would go to Jane if it’s not able to protect her in any way, doesn’t quite add up.

What does work is Thor’s relationship with Mijioner. Thor treats the hammer like an ex that he has broken up with. At various points throughout the movie, he tries to get the hammer to leave Jane and come back to him. Only it doesn’t work. And whenever Thor does try to talk to Mjionier, his new weapon, Storm Breaker, comes flying around. the corner like a jealous ex. It’s probably the funniest reoccurring gag in the movie, and it definitely works. Chris Hemsworth plays comedy brilliantly, with his non-sexual crush on Star Lord in the Guardians of the Galaxy, this his relationship with the hammer here. It might have looked like a ridiculous or goofy situation in someone else’s hands, but Hemsworth makes it work.

The story here is pretty basic, and that’s one of the biggest problems with the movie. It really boils down to just three acts or parts, unlike Ragnorak, which was loaded with ideas (just the time spent on Jeff Goldblum’s planet alone could have been broken down into multiple acts.) But here, in Love and Thunder, we’ve got Thor learning about Gor and crossing paths with Jane once again, then for the second act, we’ve got Thor visiting Zeus (Riussell Crowe,) in Omnipotent City, (Why not call it Mount Olympus, where Zeus lives in Greek Mythology?) and then for the final act, Thor and company go to another planet or area – called the shadow realm to find Gor and bring back a bunch of Asgardian kids he kidnapped. The first act is probably the best of the three, as it includes a great sequence where Thor kicks ass against aliens, set to the first Guns N Roses song in the movie (there will be three others later on, all pretty great.)

The middle act, in Omnipotent City is enjoyable enough. It’s fun seeing Russell Crowe out if his element, now an overweight, bloated man who is embracing his new look in this movie. Crowe does Avery strange accent here, and it actually works. Nothing especially funny or interesting happens during the sequence, and the whole point of the thing is to get Zeus’ thunderbolt, which is a McGuffin if ever there was one, but the cool location and Crowe as Zeus are enough to make it a decent scene.

At the end of the day, there are lots of cool things about this movie. Thor’s royal blue armor costume is a nice improvement over his usual red and black. The way the movie brings back Lady Sith is a welcome touch. And the music by Guns ‘good N Roses goes a long way. Each song is matched perfectly with a lively action scene. What doesn’t work as well is the story, which is a little too basic, or the fake out deaths. Those have always been a problem for Marvel, and there are way too many of them here. The humor isn’t as sharp as it was in Ragnorak and the consequences aren’t nearly as important (that movie stripped Thor of his hair, his hammer, his father, and Asgard.) But not every movie can have tons of dire consequences, and saying this movie isn’t as good as Ragnorak is really just saying this movie isn’t great. But it is good and entertaining enough, and definitely better then the last two Marvel movies (The Eternals and Doctor Strange 2.) For now, let’s up Waititi makes a third Thor movie, capping off his own trilogy, and goes back to the inspired craziness he had in Ragnorak.