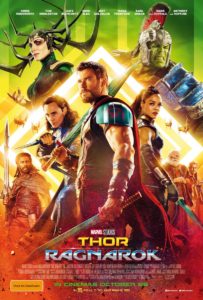 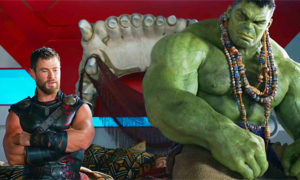 A fun entry into the Marvel Cinematic Universe, this one is more Guardians of the Galaxy than it is Ant Man or Doctor Strange. It’s first and foremost a comedy, and that’s both a good and bad thing. The good is that it’s very funny. The bad is that it tries a little too hard to get us to laugh, with nearly every other line being another joke. At a certain point we want the characters to just shut up and get serious already. But the action is there, and having Hulk as a main character in this film definitely adds to the fun. There’s some great campy atmosphere here, as the movie clearly goes for an eighties vibe, and pulls it off nicely.

It’s not easy to make an alien planet movie. Even when humor is involved. Just look at the fate of John Carter, a film that had both a cult following, comic book fan base, and also the word of mouth of critics who said it was actually pretty good. These days, the other worldly distant planet movies that do well are usually the more serious ones like The Martian or Interstellar. But in the hands of Marvel studios, anything can be accomplished. They proved that with Guardians of the Galaxy, a movie about a bunch of heroes nobody heard of, living on, you guessed it… an alien planet. So it’s not surprise that Thor Ragnorak works. Unlike Guardians, which came out of nowhere, this movie features a likable hero that we’ve been with through four other films already (two of his own movies, and two adventure films.) On top of that, there’s also our reigning champion returning for this film, the character who single-handedly either made or saved both Avengers movies…. The Hulk.

It was very smart of Marvel to put the Hulk in this movie. First off, everyone was wondering, after Captain America: Civil War, where both Thor and The Hulk were. And so with this movie, Marvel is able to kill two birds with one stone and answer both of those questions. Secondly, considering how much fun The Hulk was in those other movies, why not throw him into this one too? It will only add to the experience and excitement. Mark Ruffalo plays the Hulk character much better than any actor has before. Since the birth of the golden age of superhero movies, studios have tried to get the Hulk off the ground twice. Once was with Eric Bana in the role. The second time was a Marvel movie with Edward Norton taking up the mantle. Neither one worked. But in the hands of Ruffalo, an actor who is quiet, calm, and subdued, fully willing to take a backseat to the louder, more humorous movie stars like Robert Downey Jr., the Marvel movies finally got the character right.

So here we have a movie about Thor getting kidnapped by an alien being and having to face off against the Hulk. But there’s a whole lot that happens before that. The movie opens with Thor hanging from a chain, prisoner to the fire god being known as Surtur. This guy is a fire demon and he looks incredibly cool. There’s some humor right from the start, as Thor swings around on the chain he’s hanging from, unable to continue facing Serter as the villain goes off on a rant. And then there’s a fight where Thor escapes.

He returns to Asgard to learn that his father is missing and Loki has taken on the form of his father to fool people, and rule the land. Once Thor calls Loki out on this, he is able to convince Loki to return to earth and help him look for their father. They get even more help in the form of Doctor Strange, who resides in New York and tells them that they can find Odin, (their father,) in Norway. And so they go to Norway, locate Odin (the first movie always called him The All Father, but for some reason that name was dropped in movies two and three,) and learn about something called Ragnorak. Thor has heard this name before. Ragnorak refers to the destruction and demise of Asgard. Surtur spoke of it coming when Thor was imprisoned there, earlier.

Now Odin reveals that he is dying and that once he dies, a woman named Hela will be released from a prison in space that Odin has been keeping her in. Hela is the sister of Thor and Loki that they have never known about. Making this claim now feels a little cheap. So many movies involve a character out to take revenge who turns out to be a long lost brother or sister, jealous that the others were chosen while he or she was shunned. Even the first Thor movie was about that, with Loki facing issues over being adopted and not looked upon as the golden boy, the same way that Thor was. It’s also annoying when a movie tries to retcon things that happened in the earlier films and pretends that things were going on in those first movie that we never knew about, when clearly they weren’t. The Bourne movies tried to do that a number of times, but never more so that it did in the last movie, titled Jason Bourne, (which subsequently was the worst of those movies.)

Other than this, however, the movie works. Hela does come to Asgard as Odin predicted, and right away she destroys Thor’s hammer. This bit of weaponry that is known as the item which almost nobody can lift (there was a whole sequence in The Avengers Age of Ultron, that was devoted to that fact,) is now not only lifted, but destroyed. That leads to Thor and Loki being banished to another planet. The planet of Sakaar is filled with giant mounds of garbage. Thor is captured upon his arrival there, and turned into a gladiator, ready for competition. Part of getting him ready includes cutting off his hair.

Thor’s first match is against the Hulk. The fight is fun, and after its over, he and the Hulk plot their escape from the clutches of the man in charge, The Grand Master (played by Jeff Goldblum.) The escape sequence, where they take space ships out of town and are chased in an aerial dog fight by other space ships, is very much like a sequence in the second Thor movie, where he and Loki also looks flying spaceships for a chase, in which they were escaping. It’s a little better here, because it involves them jumping from ship to ship, and also features more characters on their side, such as Valkyrie, (Tessa Thompson,) who actually comes from Asgard and was defeated in the past by Hela, (again, another example of either retconning the original film or pretending that Thor has been an idiot who never heard of Hela, not even through stories of how she took on and killed nearly all of the Valkyrie warriors.

If the idea that Thor never knew about Hela is pretty dopey and convenient for the plot here, the idea that Valkyrie is from Asgard and has reason to go back and seek revenge on Hela is good enough to make up for it. And so Thor, Loki, the Hulk, and Valkyrie form a team that goes back to Asgard to kick ass. The movie uses this plot to fit a three act structure nicely. The first act is about the sacking of Asgard. The second act is about the alien planet, Sacaar. And the third act is about Thor’s return home. All of this works and moves at a nice, quick pace. There’s also plenty of humor to go around, including director Taika Watiti voicing the role of the funniest character in the movie, Korg. Having him do the voice is a smart move because it adds a flavor of his New Zealand comedy films, (What We Do In The Shadows and The Hunt for the Wilder People,) by way of his New Zealand accent and witty dialogue.

Like Iron Man 3, or even Captain America: Civil War, the third movie in this heroes trilogy leaves things in a place that pretty much seems irredeemable and irreversible. Then again, at the end of Iron Man 3, Tony Stark destroyed all of his Iron Man suits, and then in the next Avengers movie, Age of Ultron, he was right back at it again. So who knows. But it does seem like this movie takes chances with where it ends up going, and a pretty clever way of handling the villain. The third act is just as special as the first two, and in a movie like this that is spectacle and excitement above nearly anything else, that’a an accomplishment. These types of movies, where the place that the third act will go is so predictable (the heroes will obviously return to Asgard to get revenge on Hela,) often don’t maintain their momentum and energy all the way through. But this movie pulls it off by keeping some surprises up its sleeve for the final act.

Thor Ragnorak isn’t a great movie. It’s not one of the better Marvel films. It’s neither the best Thor movie, (the first one is,) nor the best colorful outer space movie, (Guardians of the Galaxy is.) And yet it is still a good deal of fun. Taika Watiti turns out to be a solid choice for a director. And the movie comes off more like a comedy, along the same lines as Ant Man, then anything else. The casting here is pretty great, with each actor bringing and adding something new to the big picture. Jeff Goldblum in particular embraces his weird, quirky persona as both an actor and a person. So does Karl Urban, as Hela’s henchman. Hela, herself, unfortunately, isn’t the greatest villain.  She’s just not all that memorable, (for anything other than her cool helmet,) but she’s still a hell of a lot more memorable than the villain in the second Thor movie, (the Dark Elf, Maliki.) The movie has some areas that leave things to be desired, but for the most part, it’s a pretty entertaining and enjoyable, light-hearted, and campy fun experience.