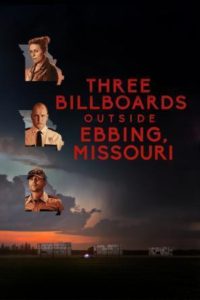 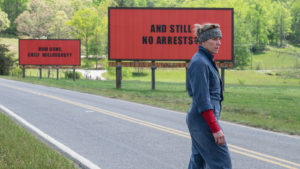 A different kind of movie, this one is a drama that takes its story into areas you wouldn’t expect, as it tells the tale of a character on a unique mission.

This is a movie that goes for originality and creativity in every way. You expect it to be about the investigation of a murder, and trying to catch the person who did it. Only this is not that kind of movie. It’s not a mystery. It’s more about the people who are dealing with the murder, and how they go about their lives. Mildred, (Frances McDermond,) is the mother who believes the police aren’t doing enough. She puts up billboards to drive that point home. Only she’s not so innocent or great herself, as we learn throughout the film. Then there’s Woody Harrelson, playing the police chief, who actually cares, and feels bad that this woman blames him. And Sam Rockwell plays a racist cop who is trying to decide what kind of person he really wants to be. There’s no black and white here. Every character is flawed and every character is fleshed out to give us some fascinating individuals populating this small town and dealing with this horrific situation.

Three Billboards Outside Ebbing Missouri is the kind of movie we need right now. With today’s cultural climate that is a combination of corrupt politics, (Russia meddling in the election of President Donald Trump,) and the Me Too women’s movement against harassment, this movie feels right at home as a rebellion piece against today’s times. But this is so much more than just a women are right and good and rising up, and men are wrong and evil kind of movie. This is a movie where every character is flawed and vulnerable and living an unsatisfying life, in one way or another. The characters here are not black and white, and in fact are generally sympathetic to the cause that is being pursued by Mildred, (Frances McDermond,) the mother of a teenage girl who was raped and murdered very close to where she lives.

The movie opens with Mildred driving down the stretch of land that is a road which runs right by her house. Nobody ever takes this road anymore, ever since the highway was built, but it still has three empty billboards on it, one after the next. Mildred notes the way that these billboards are so perfectly placed with each other, in such a way that they could create a joint advertisement or message. And then she goes into town, to the office of the kid in charge of the advertising and hands him a paper with what she puts to put on them.

This young man is Red Welbry, (Caleb Landry Jones.) He’s an easily recognizable actor, and boy is he having a good year, acting  in Get Out at the start of the year (as the creepy brother,) and now this film at the end. Two best picture Oscar nominated films. Clearly the guy is good at picking roles. But he’s not the only one. Another actor in this movie who is on the hot seat with a scorching track record is Lucas Hedges. He plays Mildred’s other child, Robbie, a teenage son who lives at home with her. Hedges has had one major success after another. Right now he’s in this movie and Ladybird, two Oscar nominated films. And last year it was Manchester By The Sea, for which he was Oscar nominated.

The casting doesn’t stop there. We’ve got Peter Dinklage, from Game of Thrones, in this one as a man in town who has his eyes on Mildred, and John Hawkes playing her ex-husband who has left her for a much younger woman. And then there are our other two lead actors, besides Frances McDermond, Woody Harrelson and Sam Rockwell. Returning to work with director Martin McDonagh again, after their outing on Seven Psychopaths, these two continue to bring their A game to the project and both knock it out of the park. Harrelson plays Chief Willoughby, the sheriff of the town. He’s the one taking all the blame and being singled out on the billboards by Mildred for not having made any arrests regarding the rape and murder of her daughter. And Rockwell plays Dixon, the racist and dopey cop who works under Willoughby and is misguided in his ways.

After Mildred has the billboards put up, we watch as Dixon drives past them. He views them in reverse order, with each billboard revealing a little bit more of the message until he gets to the very first one. And we see what they say, for the very first time, through his eyes. The message is as follows… “Raped and murdered… and still no arrests…. how come Chief Willoughby?” So the last billboard we see is the raped and murdered one, and boy does it have an impact. Not only on us, but also on Dixon, who high tails it into town to find out where the billboards came from and who put them up.

We go back to Mildred to see her get a visit from Willoughby himself, the character played by Woody Harrelson. From reading the message before meeting the man, you expect Willoughby to be a villain. Either he’s an uncaring jerk, or an incapable idiot. The truth is, he’s neither one. He’s actually a nice guy, sympathetic to what Mildred is going through, who feels like he has done all he could to catch the killer, and has just come up short. He’s not there to ask her to take the billboards down, so much as he’s there to help ease her pain and make her feel better about what the police have done. Only he doesn’t succeed. And eventually he lets Mildred know that he has cancer and will be dying soon. She doesn’t seem to care.

Dixon, meanwhile, is the deputy with a reputation. Everyone in town knows he’s a racist with some history of beating up black kids. Dixon also lives at home with his chain-smoking, beer-drinking, angry at the world mom. Through a couple of scenes between them, you can clearly see how Dixon turned out the way he did. And there’s a fantastic scene when Dixon gets especially upset about something and goes nuts, literally beating a guy up anc then him out a window.

If Willoughby is such a good guy, and Dixon is such a scumbag, the question remains as to why Willoughby would keep him around, on the force. Willoughby answers that by explaining that people who know of Dixon’s reputation don’t see him on a daily basis. They don’t know what else the guy has going on. Willoughby does. He knows that there’s some good in Dixon, and that it’s just misguided, and hasn’t found the right way to come out.

At about the halfway point of the movie there’s the death of a major character, that shakes things up quite a bit. The character writes letters to others, before he dies, and now we get to see each character open the letter and read this final message to them. The messages are heartfelt and deep, and in some cases they change the paths that the characters were on. Dixon, in particular, starts going down a different route. It would take a whole lot for him to be completely redeemed, and this movie doesn’t want to go that far, but he certainly starts taking some steps in the right direction.

The beautiful thing about this movie is that it’s not what you would expect. Each character is fully fleshed out to the point where you see both good and bad. Mildred, for example, the character who is on a crusade, and calls it like it is, unafraid of anything or anyone, hasn’t been so great, herself. We see a flashback to her daughter leaving the house on the night when the girl was raped and killed, and let’s just say Mildred doesn’t treat her so well. Some of the things Mildred says to this girl are pretty horrific. And as we go through the movie, we continue to see her act in a pretty awful manner, such as the way she treats the Peter Dinklage character. This movie very much exists in the grey area, far away from anything black or white. Even the ending, is nearly as open ended as that from the Coen Brother’s No Country For Old Men. Like that movie, this one is kind of poetic, in it’s dark and humorous ways. It’s a good movie with some great characters and a fascinating story.