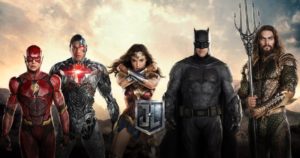 I said it with February after Deadpool (and look at when Black Panther was released, as well as how great it did.) I said it with August of 2014, after the first Guardians of the Galaxy struck gold (and the studios didn’t listen, still running away from August release dates like they were the plague,) but timing is everything. It makes all the difference in the world. In many case it’s just as important, if not more important, than buzz around a movie, (just look at what’s going on now with Venom, and how well it’s doing.)

Speaking of Venom, (which set a record for biggest opening weekend in October, bringing in 80 million from fans who couldn’t care less what the critics had to say on this one,) will this movie lead to October being next? Will the studios learn from this one? Probably not, but it’s certainly worth hoping for.

If it seems like this timing business is all pretty obvious, and like the studios don’t really need to learn a lesson, wait until we get to talking about Justice League and Solo, and their abmissal release dates. But let’s stick with the good for just a few more moments first, before we delve into the depths of the problem.

Deadpool came out in February of 2016. There was nothing else nearby. No other superhero films. And Deadpool got everyone’s attention. The movie did tremendous business and established those early months of the year as a great time to release R rated franchise films. Logan and John Wick 2 (both rated R,) both came out around that time the following year, and both did very well.

But sometimes the studios make quick decisions about release dates that seem pretty illogical. With Justice League, the issue of how the movie ended up getting released when it did, is one for the ages. Look, Justice League is not a good movie. But it’s not terrible either. It’s about on the same level as Venom, which means it’s kind of dopey, but also kind of fun, in a B movie sort of way.

And Warner Brothers decided to release it in November 2017, just two weeks after Marvel released Thor Ragnorak. What??? Two weeks?  First of all, don’t release anything two weeks after a Marvel movie. Realize that fans of the genre have already spent their money on a superhero movie for that month (or gone to see their one superhero movie of the month, if that includes things like getting a babysitter, or finding time to get to the theaters.)

But then to make matters even worse, Thor Ragnorak (all Thor movies really,) are about a god-like superhero. It’s fantasy at the highest level, including other worlds, planets, aliens, and futuristic weapons. So don’t go giving us another fantasy superhero movie about characters with special powers just two weeks later. Maybe a dark and gritty realistic superhero film, like a Batman, might have had a chance. Maybe not. Either way, releasing Justice League here was an incredible blunder. And the box office receipts showed it. People would have been hungry for the movie (like they were for Venom,) if it was released in an area where there were less superhero films to choose from.

And then there’s Solo. Released by Disney, the same studio that gives us the Marvel films.  Boy did the studio president, Bob Iger, get greedy. Iger has gone as far as to admit to admit his mistake and take full responsibility for the release date, which is why I’m attributing the blame to him here. But this is another case of “what the hell was he thinking?”

Here’s the groundwork…With Disney buying Star Wars and the release of The Force Awakens in 2015, a new era of Star Wars films was born. It was December, and the studio crafted out a plan. Release a new Star Wars film every December. It was the same plan that the Lord of the Rings movies had utilized fifteen years earlier (from 2001 to 2003, every December, a new LOTR movie, until the third and final one ended up winning the best picture of the year Oscar.)

First of all, they were breaking their own rule and plan, about releasing a movie once a year, in December. Secondly, this May date was just weeks after Avengers Infinity War (by the same studio. Talk about canibalizing themselves.) And lastly, they didn’t even have another Star Wars movie lined up for the next year and a half. That’s right. The next Star Wars movie won’t be released until December 2019. So why rush Solo out? And if you don’t think they rushed it, you might want to read about how the directors, Phil Lord and Chris Miller (the same guys who brought us the 21 Jump Street movies and The Lego Movie,) were fired after directing more than half the movie, and then replaced at the 11th hour by Ron Howard. Yeah, they could have used more time to get this one right.

And this is why timing is so important. Compare Solo and Justice League, two movies with built in fan bases,  (that should have been huge,) to Guardians of the Galaxy and Venom. No one ever even heard of the Guardians of the Galaxy when that movie was released. But it found a spot in the empty month of August and cashed in. Just like Venom did with October. Fans get hungry for a superhero movie when they haven’t seen one in  while. It’s as simple as that. And I’m fine with one being released every month (in fact, during the summer time months of May through August, that’s exactly as it should be,) but when they start getting released every two weeks, it’s overkill. Hopefully the studios will learn this lesson soon.