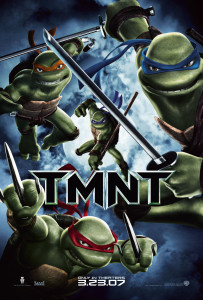 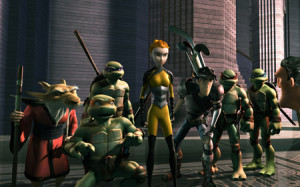 One Liner Review: kind of cool in it’s dark, shadowy animation style, but kind of dumb in it’s plot that deals with monsters.

Teenage Mutant Ninja Turtles was a huge comic book turned popular cartoon phenomenon back in the eighties and early nineties. this thing was everywhere, and they even made some live action movies about it. but then the turtles kind of fell off the face of the earth to make way for other things. Like the superheroes that have been dominating movie theaters for over a decade now (X Men was in the year 2000.)

So how do they try to bring the turtles back into the spotlight? With an animated movie that is dark and gritty and even resembles anime in it’s violent ferocity. there was definitely potential here, and I like what TMNT was trying to do. it seemed like this movie definitely had good intentions. clearly this movie was designed with the market scheme of making the cartoon feel more realistic in that dark jason bourne / casino royale / christopher nolan – batman movies kind of way. and yet for the actual storyline that they went with, they failed that concept miserably.

the plot of the movie involves portals, stone creatures, and giant monsters. considering that the movie is going for a shadows and realistic kind of tone, using state of the art animation effects that zoom in whenever they want and keep the movie dimly lit, you would think they would try to keep the plot a lot more realistic.

one thing i loved about the original teenage mutant ninja turtles movie, the film that first brought the four guys to the screen, back in the late eighties, was that aside from the turtles and their rat master, splinter, the rest of the storyline was plausible. it was about a group of teenagers who were basically brainwashed by the shredder into going out and stealing and working for him by doing low level theft jobs on the street.

and you would think that in today’s day and age, where the bourne movies have influenced the bond movies, and the three nolan batman films are as dark and realistic as can be (for this genre), that maybe TMNT would have learned something from all that. you would think that maybe considering the turtles haven’t been around in about a decade, just maybe they would want to relaunch the characters for a new generation. but instead, they get this one chance here and they make the premise about monsters.

well, getting past that major point in the storyline, the rest of the movie is pretty decent. i really like how it starts out with everything we remember about the turtles being in the past. there’s no point in retelling their origin story and this movie spares us another rehashing of the same thing. instead, it begins with the guys in their current lives, which is years after any of the events we might remember, have taken place.

leonardo, the leader and most mature and responsible of the group, is out in south america finding himself. that’s where april is too, and there’s some kind of statue excavation that she gets involved with. the statues end up coming with her back to america and becoming stone creatures, but that all happens later on.

while leo is away, the other turtles are at home, in their sewer layer hanging out. michaelangelo has a party company. donatello is an i.t. guy, on the phone with customers trying to talk them through their computer problems. and raphael is the night watcher, a vigilante who prowls the streets at night and then comes back home and sleeps all day.

the story isn’t all that creative. the turtles join up with the foot clan (their old enemies) to fight off these stone creatures. there’s also a plot about catching all thirteen of the monsters. it’s all pretty dumb. the good stuff comes when we see the turtles actually have to deal with each other. there’s a fight, for example, between leonardo and raphael, with raph dressed in his night watchmen gear. it’s absolutely the best action scene in the movie, as it takes place on a building rooftop in the rain. and what makes it so great, is that it feels like it could be real. no giant monsters or alien portals or laser beams being fired. just two ninjas fighting it out on a roof.

this movie got some pretty talented voices to help out with the parts, and i have to say that i’m impressed with who they got. chris evans, of fantastic four and captain america fame, voices casey jones, the hockey mask wearing human. laurence fishbourne is the narrator (he has such a great voice for this, it would have been nice if he was in the movie for more than just the opening scene.) then there’s also patrick stewart (a fanboy hero from both star trek and x-men) and sarah michelle gellar (buffy). every one of these actors was cast because of their following. every one of them has been in movies that comic book and action movie fans love (with fishbourne, it was the matrix films). but casting isn’t enough to save this film. the plot needed to be smart enough to not include monsters. the movie is okay, and the action is sometimes fun, but in the end, the plot really is everything.