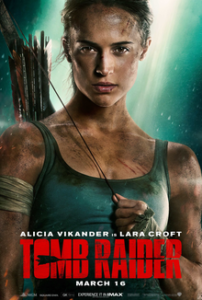 An okay action movie, that might grittier and more realistic than the Angelina Jolie films, but still feels like the kind of thing we’ve seen before and grown tired of.

The new Tomb Raider reboot, starring Oscar winner Alicia Vikander is a lot better than the Angelina Jolie that came before it. Unlike those popcorn, big budget effects films that felt more like Michael Bay movies than anything of actual merit or smart content, the new version does feel smarter. But it still packs its share of problems. The action isn’t that great, and the story feels kind of basic. The good news is that what we get is something darker, grittier, and more realistic. We also get a pretty cool villain, played by Walton Goggins. If only they went for more practical effects action, (the CGI makes this look worse than it should,) and a somewhat more creative story. This movie might be different than those others, but it still feels pretty familiar.

Tomb Raider, the new reboot of the movie franchise that was spawned by the popular video game series is just ok. It’s better than the Angelina Jolie versions (there were two of those,) from about a decade ago, but that’s not really saying much. These days everything is about having an already existing IP (name brand recognition,) and then remaking or building onto it with a sequel. It never ends. The Lord of the Rings has a new series coming to Amazon (a prequel series,) Game of Thrones is developing a prequel series for HBO, and Breaking Bad has it coming out of both ends (the Better Call Saul prequel series on AMC, and the in-the-works sequel movie starring Aaron Paul’s Jessie Pinkman. So considering that everything that has ever done well gets more and more entries (yes, Bad Boys 3 is happening, and one day we’ll probably see an Independence Day reboot,) it’s no surprise that they made a reboot of Tomb Raider.

But what exactly is it? While movie spinoffs from other movies often do well, and tv spinoffs from tv shows often do well, this one is based on a video game. There aren’t many of those to look at as positive models for success. A few years ago, people were keeping their fingers crossed about the Warcraft and Assassins Creeed films. Everyone was thinking that at least one of those movie had to be good, and if it was, then it would open the doors for video game movies everywhere. Only neither of them was. They came out, and both were awful. It’s pretty much the story with nearly all video games, including Street Fighter, (there have been a couple of those reboots,) and Super Mario Brothers. The only video game movie that was actually fun enough to be considered “good,”  on some levels, or at least entertaining, was Mortal Kombat. And that movie, (which is totally a B film,) got a sequel. But Tomb Raider has got it beat. This series now has not only a movie, but a reboot, and three films in total. Too bad none of them are all that good.

This Alicia Vikaner version might not be memorable, but it is certainly better than the Jolie films. For one thing, it’s not trying to be cartoonish, the same way that those movies were. You see,  in the game, Lara Croft (the protagonist,) is a well-endowed, short shorts wearing, adventure seeker. She’s basically a grave robber a la Indiana Jones. Only in today’s PC friendly climate, you can’t really have any of that anymore. Not the short shorts, not the physical stature, and certainly not the graverobbbng. And truth be told, nothing is lost by getting rid of those things. If anything, it forces the filmmakers to focus more on the story and less on the eye candy.

The goal of this movie seems to be to give us a realistic and gritty version of the character. Now, that’s kind of a big joke considering the adventures and action scenes Craft finds herself involved in, but just think for a moment about that first Jolie movie. It actually opened with Croft fighting a giant robot. You’re not getting any of that here. This movie really does want to be like a cross between Indiana Jones and National Treasure, which means the action might be outlandish, but at least it is all feasible. The same way that Indy had to go through booby traps to arrive at an ancient temple in Indiana Jones and the Last Crusade, Lara Croft has to do the same thing here. And in both cases, this series of traps doesn’t occur until the end of the movie.

But long before that, Croft is in London doing some athletic activities to get this movie started. First she’s kick-boxing and getting beaten down. Then she’s volunteering to be the “rabbit,” in a bike race where a ton of other bikers are trying to catch her. It’s all a lot of fun, especially when Croft jumps her bike up onto a pickup truck and crouches down low as the other bikers whiz by her with no idea where she’s gone. And yet she still ends up getting caught, in such a way that she causes an accident and ends up getting arrested. Between the kick-boxing scene and this, we are seeing that this version of Croft is clearly a bit of a screwup. Unlike the Jolie version or what we usually get from our larger than life heroes of the silver screen, such as James Bond, this version of Croft is certainly vulnerable, and can easily be defeated.

Most movies don’t open with their heroes failing again and again, unless their comedies, (like Get Smart, with Steve Carrell.) But this movie most certainly is not that. Instead, it just clearly wants to establish that this film exists in a realistic world where our characters cannot do the impossible and can definitely be bested. It might sound fresh, but we’ve actually seen this kind of thing before, from Christian Bale’s Bruce Wayne finding himself in a Cambodian prison at the start of Batman Begins, to Eggsy finding himself locked up behind bars at the start of the first Kingsmen. Heroes these days are really anti-heroes, which means they aren’t by the book goody goodies and don’t always play by the rules. And that’s what we get here with Lara Croft. She’s a trust fund baby who can’t touch her fund until she signs papers that say her father is dead. Only she doesn’t want to believe it, and instead heads out to Africa in search of him, hoping to prove that he is actually still alive.

Now, one thing cool about this movie is that she doesn’t get to her destination so quickly. Instead, it’s a bit of a journey to get there. That includes being mugged on some docks in Hong Kong and fighting off her attackers. It also involves getting the owner of a ship to sail her to the island where her father was last seen, and in order to do that, they sail through a massive storm. This thing is ferocious, and you can tell that they are going all out on effects, yet it still doesn’t look all that good. It doesn’t make you feel like you are there. That’s probably because the scene takes place at night and is filmed in a very dark way. Maybe they’re hoping that the limited lighting hides the computer generated effects. It doesn’t work. This movie would have been better off doing the scene practically with real effects like a rocking boat on cables and gambles, and water splashing over the sides. It’s funny how the further we come with effects, the less real they actually look.

But during the daytime scenes it’s a lot easier to get past that sort of thing, as is apparent from the plane action scene that happens when Croft actually arrives on the island. When she gets there, she meets the movies villain, Mathias Vogel, played by Walton Goggins. This guy is a fun actor who generally hasn’t gotten the best parts. Like Christoph Waltz, Goggins gets his best parts when he acts for Quentin Tarantino, (Waltz got Oscar wins twice, and both times were for Tarantino movies.) In the case of Goggins, it was the Hateful Eight that really put him on the map. And like Waltz, he’s only as good as the material, (which means in most things he’s been in, he’s really not all that great.) But in this movie, Goggins actually delivers. He’s about a thousand times better playing the villain here, than he was in Ant Man and the Wasp.

Goggins is entertaining in this movie because on the one hand he makes you feel for him, while on the other he seems to be totally nuts. With the feeling part, he talks about how terrible things are form him on the island, with nobody able to understand him, and being stuck there, unable to leave and go home. The first time he comes across Croft, he tells her that there is nobody else on the island and that he’s so happy he found her so that he finally has someone to talk to. And then she pulls back the curtain doorway to her tent and we see that there are a ton of people outside and a good amount of them speak English. Clearly this guy is a little nutty.

And when he tries to have Croft killed, we get that great plane scene (the best action scene in the movie,) where she gets trapped inside of this old plane, and it keeps falling down the side of a waterfall. But other than this scene, the action in the movie really isn’t all that good. It seems very limited and routine, and all leads to an ending that is right out of National Treasure, with secret tunnels, passageways, and tombs. When the video game designers decided to call this thing Tomb Raider, you have to think that they had “Raiders” of the Lost Ark in mind. This movie is definitely a combination of National Treasure and those Indy films. The villain is kind of fun, but the action and story are pretty tame and routine. The movie could have been a lot worse, but it also could have been a lot better.