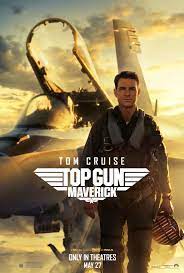 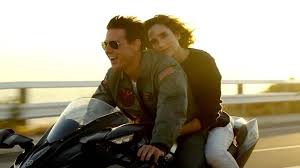 A great sequel, decades in the making, this one shows that the right time and commitment level can go a long way.

A solid movie, Top Gun: Maverick has the perfect amount of Easter Eggs and nostalgia to the 1986 classic. It’s amazing that it took so long to make this sequel, and that when they finally did, it turned out so good. The movie is about Maverick getting the call to come back to the Top Gun Academy and train a new set of pilots for a top secret and very dangerous mission. All of that is pretty standard. But what works to propel the movie along are the subplots and relationships, such as the one between the son of Maverick’s former wingman, Goose, (played here by Miles Teller,) or the relationship between Maverick and his former competitor, Iceman (played by Val Kilmer.) There is a romantic subplot, but it’s also there in the background and not a major part of the film. What does get center stage is the way that Maverick keeps challenging authority to break records and prove that the impossible can be done, especially when he’s facing a situation where he’s up against a wall and has got nothing to lose. This happens twice in the movie, and both times leads to thrilling sequences and major turning points in the plot. It’s the kind of smart writing that helps make for a great movie.

It’s been more than three decades since the original Top Gun film in 1986. This is a movie that was so great, and yet it just seemed like a sequel was not going to happen. And there was never an explanation why. Well, it turns out, they were just waiting to get it right. And part of that getting it right element has to do with waiting for the right time in our movie loving history to get nostalgic. These days, referencing and Easter Egging older movies is all the rage. Just look at last years Spider Man: No Way Home with it’s long list of villains who were all characters featured in previous films. Look at Coming 2 America, the Eddie Murphy sequel that came out last year and was thirty three years in the making. Well at thirty six years, Top Gun Maverick has that one beat. But there’s no coincidence here that these two movies, which represent the biggest gaps between sequels of all time (not counting the animated Bambi,) came out within a year of each other. We are definitely living in a nostalgic time, and Top Gun: Maverick might be one of the better things to come from that.

The movie brings back Tom Cruise as Pete “Maverick,” Mitchell, and when we join up with him again, he’s a Navy Test Pilot who has just learned that the program he operates is about to be shut down. The general (played by the great Ed Harris,) is on his way to the base right now to give the orders that all operations must stop. And knowing this, Maverick decides to go out for one more test run. Only his test run is actually trying to beat the record for what has been done before. We might not understand all of the technicalities, but we certainly get the gist, just by looking at the reactions from people in the control room. It’s a hell of way to start the movie, with Maverick’s plane moving so fast it literally blows the roof off the building that the General is standing next to, (something that apparently wasn’t supposed to happen, but was a happy accident for the director who took the footage of this moment and ran with it.)

The general sits down with Maverick and explains his disgust. He wants to ground Maverick after what just happened. Only there’s a problem. Maverick has just been called up to the big leagues. His old friend, Iceman (Val Kilmer,) is now running the Top Gun program, and wants Maverick to come train his pilots. And so there’s nothing the general can do to stand in the way. Maverick is sent packing and heads to the base where he used to work as a fighter pilot himself, all those years ago. At the base, he meets Cyclone (John Ham) and Warlock, the two men who are in charge, and giving Maverick his instructions. Between Ed Harris and John Ham, they really got the casting down perfect for this movie, in terms of new faces being brought into the franchise, and stern, authoritative  characters.

But the movie also has a ton going for nostalgia too. Bringing back Ice Man is a stroke of genius. He was Maverick’s side kick in the second half of the original film, and clearly getting him back in this role was a challenge, due to Val Kilmer’s throat cancer. Kilmer underwent surgery and for the most part can no longer talk. This movie finds a way to make that work, having Ice Man experiencing the same thing, and now only speaking through a keyboard where he types messages.

But Ice Man isn’t the only character here who connects to the first movie. There’s also Rooster, (Miles Teller,) who is the son of Maverick’s first wing man, “Goose,” (Anthony Edwards.) Goose died in that first movie, and here Rooster blames Maverick for that. The movie does something very smart in making Rooster look just like Goose, with the same mustache and all. There’s even a scene where Rooster sits at a piano playing and singing “Great Balls of Fire,” the song that Goose used to play and sing to, and Maverick gets goose bumps (no pun intended,) watching it.

There’s also an interesting women situation here. While the movie nails the male characters perfectly, from Val Kilmer to Goose’s son, (the only one missing is the James Tolkan the bald actor who played a general in the first movie and is best known for playing the principal in Back to the Future,) the women characters don’t really get the same treatment. First off, there’s Kelly McGillis who played the love interest in the first movie. She’s nowhere to be found here. To be fair, the actress herself was asked about it and admitted that they made the right decision not to bring her back, since she has let herself go, and doesn’t look anything like she once did. But then there’s the Meg Ryan character who played Goose’s wife, and is also nowhere to be found here. But then that leaves a bit of a dilemma. Do they bring in a new character for the love interest, and if so who?

The movie finds a way to navigate these choppy waters and handle the situation well. They bring in Jennifer Connelly as Penny Lane, a character who is mentioned in the first movie, but never seen. This way, when they tell us that she and Maverick have history together and go way back, we know it’s true, because we remember hearing about it all the way back when the original film was out. And Connelly does an awesome job. She’s a super talented actress who had a career resurgence in the early 2000s with Requiem for a Dream and then A Beautiful Mind. She continues to be beautiful, talented, and doesn’t seem to age, which is pretty much the same thing that can be said about Tom Cruise himself.

The storyline of this movie starts with Maverick leaving that base where he’s been working and going back to the Top Gun Academy. And once there, he begins to train the new recruits for a top secret, nearly impossible mission. We go over the mission in multiple ways, and see all kinds of diagnostics and video models of what they are being asked to do. We even see practices where they try it out on testing sites and see how close they can get. It still seems impossible. And then an important character dies, and suddenly it seems like all is lost. The academy doesn’t need Maverick’s help anymore. This leads Maverick to take a plane and go on a run himself to prove to the Top Gun head brass that the mission can be done after all. Like the opening sequence with the Ed Harris character and with Maverick breaking the record, this one also shows him defying the odds, defying what was thought to be possible, and proving what he can do. It’s one of those “nothing to lose,” moments, where if he doesn’t do it, he’s fired, so he might as well try. And it’s the perfect turning point into the second half of the movie.

That second half is about picking the pilots, training the pilots, and then doing the mission. It leads to a nice, lengthy, and thrilling climax. Maverick gets to suit up for the climax, himself, and join his recruits, which is what you want in a Tom Cruise starring movie. Nobody wants to watch him standing on the ship back home, giving orders over a head-set, even if that would be the more realistic situation, considering the whole movie is about him training younger guys. But this movie knows what it’s doing. Even when the climax features multiple deaux ex-machinas, it works. We feel. the threat of what seems like it’s about to happen, and then we are thrilled when it doesn’t happen, no matter how coincidental or convenient it actually is.

At the end of the day, this is a good movie. It isn’t fantastic or riveting in the way that some of the better Mission Impossible or Bond movies are, but it is definitely well-made. There are the right amount of tributes and continuations from the original film, which is a tough feat considering that the original was more than three decades ago. But they pull it off, giving us all of the easter eggs and nostalgia we would want, without going too far, (the director has said that the reason why neither Meg Ryan or Kelly McGillis appears is because that would have been going too far with the nostalgia.) The movie is exciting and fun. And considering how much movies have changed since the original came out back in the eighties, the fact that they were able to take something like this and make it still feel relevant and entertaining is huge. It’s definitely a major accomplishment.