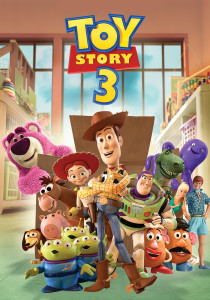 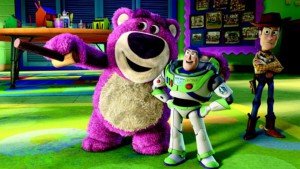 An emotional and smart film that finds new and clever ways to make the situations feel fresh.

Toy Story 3 is an elaborate little tale about what happens to the toys when they’re no longer wanted. That premise alone is sad, as Andy, the toy owner throughout the trilogy, is now old enough to be heading off to college. He doesn’t bother with the toys anymore and hasn’t for years.

That’s where the fun really begins. They arrive at a school for little toddlers and meet a whole new set of characters. There’s Lotso Bear, the old timer leader of the bunch, and there’s Ken, the pretty boy. There’s a Baby as a bodyguard and a Symbals Monkey as a security guard.

Here, at this new location, the toys clash with the new toys and find themselves facing off in a battle for survival. One thing that really sets this movie apart from the other two in the series is that for the first time here, the villains are not human. The first movie offered destructive Syd as the menace next door and the second movie, while also featuring the Prospector, really dealt with the kidnapping of a toy by an evil collector.

This third movie continues off the second movie’s idea to have one of the toys be a villain, and this time, it’s a whole group of toys led by one in particular. There’s back story here and imprisonment and a climactic ending that’s remeniscent of the end of the Star Wars, Episode III: Revenge of the Sith, with that planet of red lava rivers everywhere you looked.

The movie really gets creative and holds nothing back. It seems a little too scary for kids, and often too sad for adults, but these are good things that make it an incredibly powerful movie. The Toy Story series has always been about waiting to have good scripts before making the movies. The first film was made in 1995, a full fifteen years ago. Since that time, Shrek came out (in 2001), and that series is already up to their fourth movie. The people at Pixar are in no rush. They choose quality over quantity and it really shows. Toy Story 3 is a fantastic film, on many levels as good as the first movie, and certainly more intense.