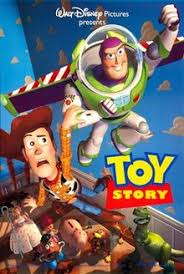 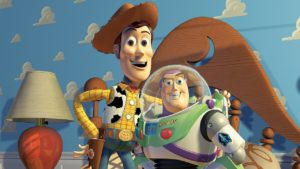 An animated classic, this one has a simple, yet creative story, and was smart enough to be the movie that changed the entire genre from hand drawn art to computer generated animation.

A pretty amazing film, this one has it all, from the humor to the simple yet incredibly relatable story. It’s a story about toys, but it is also about real human emotion including fear of being replaced and jealousy. The movie deals with all of that in the first few acts as a new character is introduced to the group and takes the role of the new, instantly popular kid in school, or the newer, younger hot model. And the movie’s protagonist, Woody, is hung out too dry. Only he’s not going quietly. When his plan to sabotage his competition, Buzz Lightyear, goes way worse than planned, he and Buzz find themselves leaving the house, out on an adventure. Two enemies who have to work together to survive. The results are a lot of fun, and lead to us getting a pretty excellent movie.

Toy Story is the computer generated animation film that started it all. Everything before this movie was 2D, hand drawn animation. Cartoons, if you will. One year before this movie, Disney put out The Lion King. And yet, with Toy Story, everything changed, Suddenly more and more computer animation films started popping up, and within about five years, that’s all there was. And while we may be nostalgic at times for the 2D animation that once was, (and still does exist in the form of newly released material with anime and Japanimation,) you have to admit… this computer generated stuff looks a whole lot better. At times, it almost looks realistic. And Toy Story started it all. It also kick-started a franchise that has gone on to make four movies, with no signs of stopping anytime soon.

It all started with two lovable toys and a collection of friends. This first movie in the series is about Woody and Buzz. Woody, (voiced by Tom Hanks,) is the cowboy leader of the toys in a boy named Andy’s bedroom. And one day a new toy shows up. That’s Buzz. He is given to Andy as a birthday present from his mom, and Buzz is instantly the new, popular kid, not just with the toys, but also with Andy. So you can imagine how all of this makes Woody feel. This becomes the setup for the story of the movie. It’s fairy simple, and yet this movie gets so much out of it. Woody might be an animated character, but he’s incredibly relatable. And he’s just a toy, complete with a wind up string that makes him catch phrases when you pull it, and everything.

Before we meet Buzz, the movie opens with Andy running around, playing with his toys, having all sorts of adventures. It’s Woody that he plays with the most, treating the toy like a best friend, taking him everywhere and having all kinds of fun with him. At one point they do a cowboy draw where Andy pulls the lever of a chair, releasing the foot rest with Woody on it. Woody goes flying into the air, sailing across the room, and lands on the chair on the other side. This is all played to the song, “You’ve Got A Friend in Me,” which is pretty much become synonymous with the movie. And then the montage and the opening ends, and Andy leaves the room. That’s when the toys come to life.

First they are just going about their ways, starting their usual routine from when Andy leaves the room, which is getting up from wherever he left them and going back to where they belong. Woody does a draw with an Etcho Sketch, who uses his knobs to draw a cowboy revolver on a screen, giving us an idea of how these toys use what they are given to have fun with each other. Woody interacts with toys like Slink – a dog Slinky, and Mr. Potato Head. He has interactions with a large green Tyranosaurus Rex, and with Bo Peep, who talks about spending time with him once the sheep are asleep, (a little innuendo there.) And then it’s announcement time. Woody gathers all the toys up, takes the loud speaker, (a portable microphone set that moves like a robot,) and gives a speech.

His speech covers two main topics. That the toys are moving in about a week, (Andy and his family are moving to a new house,) and so each of them needs a moving buddy. And that Andy’s birthday party has been moved up a few days. The toys freak out about this announcement, and it’s understandable why they hate birthday parties… the feat of new toys joining their group. But what’s not understandable is why the party moving up a few days makes a difference. It was still going to happen, just a few days later. Still, the freak out is more to show us how the toys feel about the party to begin with. And then we get the day of the party, where Woody sends out the troops – those little green army men, to spy on the gifts being opened. Turns out there are no gifts worth worrying about and everyone can breathe a sigh of relief. Until they find out there’s one last toy that the mom was hiding in the closet. And that turns out to be Buzz Light Year, who there is definitely reason to be concerned about, considering he completely replaces Woody ands shakes everything up.

This is the end of the first act of the movie. The tension level and change in strong feelings keeps going back and forth. First, all the toys are going crazy because of the party. Then the party happens, and the toys are still tense, with the army men out on their mission. But it turns out to be for nothing, and everybody starts to rest easy again. Until we find out about the secret present, and Buzz Light Year. And now it’s time for the second act, with Buzz’s introduction to the group. They instantly fall in love with him. He’s the new young hotshot. He’s the guy from the future. Buzz even claims he can fly. And when asked to prove it, he does a demonstration, which turns out to be more luck than anything else. At one point, while in the air, he catches onto an airplane, which hangs by a string around the ceiling fan, and swings with that. And then he lands, and all the toys think he was flying. Did they not see the airplane? Maybe their vision wasn’t good enough. They are toys after all.

So now comes the part where Woody gets replaced. We get another montage set to music. This time the song is “Strange Things Are Happening To Me,” and during the course of it, Andy changes everything around his room to show his new enthusiasm for Buzz. He takes down the Woody poster and replaces it with a Buzz Light Year poster. He changes his bedsheet from one that featured Woody to one that features Buzz. And the final nail in the coffin is that he kicks Woody off of his bed and starts sleeping with Buzz instead. Woody is thrown into the toy chest with all the other toys. Discarded.

That’s the end of act two. Acts one and two have been all about getting us to where the real story needs to go. Introducing us to these characters and to their situation. Getting us to understand why these two would hate each other, or at least why Woody would absolutely hate Buzz. And he does. Or at least, he’s incredibly jealous. When Andy’s mom tells him they are going to Pizza Planet for dinner, and he can bring one toy, Woody gets an idea. His plan is to push Buzz behind the drawers so Andy can’t find him, and will take Woody instead. The plan backfires, and through a domino effect, including a Raiders of the Lost Ark rolling boulder reference. Buzz gets knocked out of the window. And the toys think Woody did it on purpose, and consider him a murderer.

Andy does take Woody to Pizza Planet, but Buzz, who has fallen into the bushes, sees this and runs to the car. He jumps in, and when the car stops at a gas station, Woody and Buzz get out and fight. Andy and his mom end up driving off without them. And now the road trip part of the movie begins. Woody and Buzz work together to get a ride to Pizza Planet. And once there, they get trapped in a Claw game, and won as a prize by Syd, the evil kid who lives next door to Andy and destroys toys. Syd takes toys apart and puts them back together so that they look dysfunctional and way worse than they ever did before. He also takes the heads off all of his sisters dolls, so that she has to play tea party with a collection of headless dolls. And Syd even destroys toys, blowing them up in his backyard.

If act three is the incident of Woody pushing / knocking Buzz out of the window, but also includes the Pizza Planet situation, then act four is about their time at Syd’s house. In fact, Syd’s house is really only the second major location of the movie, the first one being Andy’s house. It’s here where the movie pretty much spends its second half. Woody and Buzz start out together, then get separated, each find their own situations to deal with – mainly Buzz with the tea party, and then need to be rescued from Syd, who is planning to blow up Buzz by launching him on a rocket. Escaping from Syd seems like it will be the final conflict of the movie, but then there’s also the fact that the morning of the rocket launch is also the day when Andy is moving away. So Buzz and Woody not only have to get out of Syd’s, but they need to get to the other toys before the moving truck leaves. All of this conflict is fantastic. The movie is filled with clever humor, but it also has a really good story to tell.There’s a reason why this one launched all those sequels, (which were pretty much all good,) and stands the test of time. It’s a very smart and entertaining film.