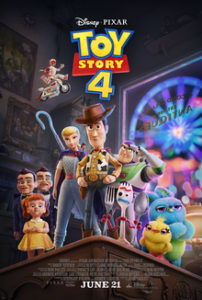 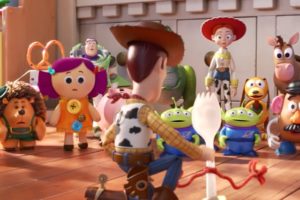 An entertaining movie, this one isn’t quite as good as the third film, and definitely feels more familiar than anything else, but it’s still enjoyable fun.

Here’s an entry in the series that is good, but far from great. The first portions of the movie, about a new character named Forkie, and how Woody has to look out for him, are superb. For the first time we are getting to see Woody in a more mature, and non-selfish light. He doesn’t care that Forkie is more popular than he is, or event that he’s not getting played with anymore. It’s about making the child happy. But then the movie takes its characters to a carnival and antique store and these two locations become the setting for most of the film. The story here breaks off into tons of different, smaller stories, and only some of them work. We don’t care about the new characters, like an antique doll named Gabby Gabby, or a motorcycle stuntman named Duke Caboom, nearly as much as we care about the original crew. And so constantly giving us new stories about new characters doesn’t seem like the best move. But when the movie focusses on Woody or Buzz, (our classics,) it excels. There’s a lot of humor here, but unfortunately a lot of it feels way too familiar.

Toy Story 4 definitely feels like a movie that didn’t need to be made. By that I mean the trilogy of animated films in the series ended back in 2010 (nine years ago,) and it ended with a beautiful sendoff that had the characters leave their child, Andy, and get passed on to a new child. Making a fourth film is always a tough sell. Sometimes you end up with one of the best movies in the series, (like Rocky IV,) although that is usually not the case. Instead, much more often, what we get is something more like Indiana Jones and the Kingdom of the Crystal Skull. That means you end up with a movie that feels forced and unnecessary and that lowers the regard that the first three movies are held in. With Toy Story 4, the movie is fine and entertaining, but it certainly doesn’t excel past the first or third film in the series, (the two high points,) and since it doesn’t surpass the last movie that came before it, this kind of makes it feel like the movie didn’t need to be made. Sure, it’s fun, but it’s far from anything special.

All of the principal cast members are back, including Tom Hanks and Tim Allen, (the fact that Tim Allen is still holding A List star status here as one of the two main stars tells you something about how long ago the series got its start. That would be back in 1995, and Toy Story was the first CG animated film (to give some perspective, that’s just one year after The Lion King came out.)  But in this movie, Buzz Lightyear (the Tim Allen character,) does take a back seat to Woody, (Tom Hanks,) which shows you that the writers have finally caught on. Nobody needs to see Tim Allen as the star of one of these things anymore. Woody, however, is in full force on a mission that is unexpected and shows off how much he has grown as a character over the three films that came before this.

At the start of the movie, we get a flashback to a time when the toys were still with Andy. Only we don’t know it’s a flashback. And so when we see the toys with Andy, and hear the boy’s name, we think that maybe the story forgot how the last movie ended or just doesn’t care about continuity (or expects to have forgotten or not care.) Not so. The flashback is established by showing us the bottom of the toy’s feet, where the name ANDY is written. Then after the flashback is over, some  years later, the name on the feet has been changed to Bonnie, Andy’s younger sister. So it takes us until after the flashback is over to really be told that it was a flashback, but it’s kind of cool, (the same way that two of the Lord of the Rings movies, The Two Towers and Return of the King opened with a flashback.)

In Toy Story 4, the point of the flashback is to show us what happened to Bopeep. She’s the sheep herding  love interest of Woody, throughout the film series. And now we see her get taken away by a buyer. The buyer just shows up at Andy’s house, one rainy night and takes a box with him, out to his parked car. Bopeep is in that box. It’s hard to remember now if she was in the last movie or not, and where the continuity is that would lead one to believe this was their plan all along, but it’s okay. Something tells me these guys have that all worked out and that it does flow. In the meantime, what it seems like we are getting here is a retread on Toy Story 2, where the villain was a collector, played by Wayne Knight. Luckily the movie doesn’t quite go that route, (after all, Toy Story 2 is the weakest of the bunch.)

Instead, after the rescue attempt that ends with Bopeep being okay with getting taken, we cut to present day and see the toys under new leadership.Since Bonnie is now the toy owner, or the kid, that all the toys are there to please, the character in charge is no longer Woody. Instead, it’s a doll character. And Woody is totally fine with that. He knows his role here, with this kid, and he goes along with it. Or so it would seem. When he finds himself not getting chosen to be played with (or even taken out of the closet,) for the third time in one week, Woody decides it’s time to do something about this. And when Bonnie is being taken to school for the very first time, Woody sees his chance. He secretly jumps into her backpack to go along with her and keep Bonnie company.

Only Woody’s intentions are not as selfish as one might expect. He’s not there to get Bonnie’s attention and win her affection back, when away from the other toys. Instead, he’s there just to help her get through her first day. He doesn’t even let her find him or know that he’s there with her. Instead, he’s more like a guardian angel, looking out for her. So when Bonnie gets really upset that her parents have left her here, in this strange place, all alone, Woody springs into action. He jumps out of the backpack, grabs a bunch of art supplies, and throws them on the table, in front of Bonnie. And this leads to her making art and forgetting all about her misery.

Seeing the real reason why Woody went with Bonnie, and that he had no intentions of getting ahead himself, is the first surprise. The second one comes when Bonnie creates a character and Woody helps introduce the character to the others. The character or “toy,” that Bonnie makes is a spork with a bunch of silly art items glued to it. The toy is called Forkie. It has two giant googley eyes, (each a different size,) and a pipe cleaner for the mouth and arms. Woody brings Forkie home and introduces him to the others as the most important toy to Bonnie. He isn’t jealous that Bonnie loves this toy the most, (boy has he come a long way since the first Toy Story, where Buzz Light Year stole Woody’s thunder,) and instead, tells the other toys that they need to look out for Forkie.

But there’s a problem. Forkie is made from “trash,” items, and so he is obsessed with going back to the trash. He doesn’t get that he deserves better and that a kid loves him. That night, Forkie sleeps on the bed with Bonnie, but keeps trying to jump into the trash. And Woody is right there on the floor by the trash, ready to throw Forkie back up onto the bed every time. None of this is a big deal since they are just in Bonnie’s room, but when her parents decide to take Bonnie on a road trip and she brings a handful of toys with her, suddenly the stakes change. Especially when Forkie jumps out of the window of the RV they are riding in, and Woody jumps out after him to watch as the RV drives away. So far the movie has been pretty good. But now it seems like it will be a buddy movie with just Woody and Forkie trying to find their way back to Bonnie and the others.

Wrong again. Another surprise twist, if you will, has them find the campground with the others pretty quickly. It is right outside of a giant carnival. But there’s something else that has Woody’s attention. The town with the carnival features an antique store, and there in the window is the lamp that went with none other than Bopeep. Is it possible she was sold to this store and is in there right now? Woody just has to find out. And so the two settings for the rest of the movie, (which really comes out to being most of the film,) are the carnival and the antique store. In both places, Woody and his friends face all kinds of challenges, including ventriloquist puppet looking dolls that seem like zombies at the antique store, and trying to rescue Buzz (who is hanging up on a wall of prizes for kids to win by playing a game,) at the carnival.

At the end of the day, Toy Story 4 is a good, but not great film. The carnival setting gives the movie a colorful and lively backdrop, kind of like what Madagascar 3 got from using the circus as its setting. But the story itself is just okay. It starts out kind of fun, being about Forkie and how Woody feels like it’s his role to look out for him, but once it gets to the carnival area it just splits off into a little too many side-storylines that don’t feel nearly as special. Let’s put it this way, even a doll at the antique shop, named Gabby Gabby, gets her own storyline. Not to mention Duke Caboom, a motorcycle stunt devil a la Evil Kineivil, voiced by Keanu Reeves. The thing that makes it out of this entanglement as one of the best story ideas in the movie is the relationship between Woody and Bopeep, which kick starts the movie with a flashback and then has a nice conclusion at the movies end. But it’s the in between that is less than filling.