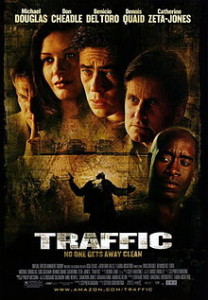 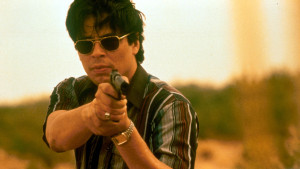 A movie that tells three compelling stories, is not concerned with the crossover between them, and instead really focusses on examining all areas of the drug trade and making the stories as powerful as possible.

An outstanding movie that covers all areas of the drug industry as we get the story of the new drug czar to the U.S., the story of his daughter becoming a user at hime, and that of the dealers being busted by the FEDS, both down in Mexico and on U.S. soil. We follow two detectives as they bust a drug dealer here in the states, only to have the cartel come at them, looking ton kill the eyewitness who plans to testify. We follow the wife of the dealer who was busted, and learn of her desperation to save her children, and how that desperation would lead her to go down paths that she never would have thought possible. And then there are the  cops in Mexico who figure things out in terms of the corruption, but are unsure of who they can trust in order ton get this information to the right authorities. The crossovers between strories are great, and so are the deep, dark levels that each story is willing to go to.

Traffic is a fantastic movie about the drug industry and how there are so many avenues to view it through. The movie tells about four different stories and covers all bases, from the cops to the dealers to the kids who are actually using the drugs. It even features the new drug czar of the U.S. as one of the main characters and then has the courage to give him a personal storyline about having a kid with a drug problem at home. There have been lots of great movies about the drug industry, from Transporting (about the users,) to Sicario, (about the cartels.) Traffic stands on its own as the movie that not only does it all, but shows how every story and part of the industry is connected.

This movie was the crowning achievement of director Steven Soderbergh. He won the best director Oscar for it, even when the movie didn’t win best picture. The directing award was well-deserved. This movie works hard to give us a full picture of the landscape and situation of the drug industry. It not only covers the government response, the users, and the cops here in America, but even has a major storyline that features cops in Mexico, trying to get drugs off the street or at least figure out who is involved in selling them.

Benecio Del Toro playa Javier Rodriguez, the lead detective on the case in Mexico. At the start of the film, he and his partner, Manolo make a major drug bust, only to have the supply and credit taken away by a general who says, something to the extent of, “thanks for your help, we’ll take it from here.” Now this man, General Salazar, wants to give the boys other jobs, starting with having to bring in a man who is a known hitman for one of the cartels. They comply with their directives, but do it with uncertainty wondering if General Salazar is really trying to clean up the streets, or if he is actually working for one of the cartels.

From here we meet the American supplier who works with the cartel that Javier just busted. This is Eduardo Ruiz, played by Miguel Ferrer, and he gets busted by two undercover cops in a raid that turns into a foot chase to a children’s playhouse building. The cops catch Ruiz and get him to turn evidence against his boss, Carlos Ayala. That leads to Ayala being arrested and his wife, Helena Ayala (Catherine Zeta Jones,) learning what her husband actually does for a living. Now she needs to figure things out for her family. This becomes especially interesting when a man approaches her son on the beach, snatches the kid up, and threatens to snap his neck if she doesn’t get the money that her husband owes.

And then there’s the story of the drug czar, Robert Wakefield, (Michael Douglas,) who is being sworn in and briefed on everything that is happening with the cartels, but who also has a problem with a drug addict daughter at home. That would be Caroline, (Erika Christensen,) a girl whose core group of friends are a bunch of drug addicts from upper class families. Her boyfriend, Seth (Topher Grace,) is the guy who seems to be the leader of their group, and the one who can get them the drugs. Only these kids have non control over what they are doing, and we see how quickly it leads to problems when one of their friends overdoses and they try to leave him on the curb outside of a hospital.

There are about four key stories here. Wakefield is featured in two of them. There’s the story of him as the drug czar and then the story of him as the parent to his out of control daughter. Then there’s the story of the cops in Mexico, and the one of the helpless wife and the cops who are spying on her, looking for evidence that can help incriminate her husband. These cops are Ray and Montel (Ruiz Guzman and Don Cheadle,) and nearly all of the humor in this movie comes from them. They think that Helena knows more than she is saying, and they sit in a van right outside of her house, trying to catch her in a mistake.

What really works about the movie are the ways that one story folds into another. We meet General Salazar in Javier’s story, but then meet him again in Wakefield’s story when Wakefield goes down to Mexico to see for himself what’s going on (this is similar to a key part of Sicario, going into the enemy territory.) Wakefield asks his staff who the counterpart is that does his job in Mexico. He is told that his job doesn’t exist in Mexico. The General is the closest he can get, and so he goes too meet with this man.

Another great crossover comes in the way of the assassin, Francisco Flores (Clifton Collins Jr.) Javier catches him and brings him to General Salazar. Flores becomes an informant of sorts. But he also continues to do jobs for his cartel, and that includes attempting to kill Ruiz before he can testify against Helena’a husband. This turns into a major catastrophe when the assassination attempt goes haywire and leads to a shootout and car explosion. It also changes the game in terms of Helena’s involvement. She wasn’t planning on getting involved in the drug business herself, but when her child is threatened and she sees that she needs to get the money to pay off the people her husband owes, she turns to becoming a supplier herself, and even goes down to Mexico to meet with the dealers her husband works with.

One thing terrific about this movie is that it really captures the mentality of its characters and puts you in their shoes in terms of desperation. We understand why Helena would go down this path and become a drug supplier, after her son’s life is threatened. Similarly, we understand the way that Wakefield’s perspective on the drug industry changes once he gets an inside look at the government operation and asks questions that most people in his position never bother to ask. The first question is who does his job down in Mexico. The second one is what do people in treatment have to say about the government approach to getting the drugs and users. He is shocked to learn that nobody from treatment has even been invited onto his plane to be a part of the conversation. And then, when Wakefield is in Mexico and asks General Salazar about treatment, the General laughs in his face, saying that these users overdosing is their treatment, and it helps him by getting more and more of them off the street, dead. To Wakefield, hearing all of this and thinking about it in terms of his daughter at home, doesn’t feel so good. And as the movie goes on, and Caroline goes missing, Wakefield is forced to go on a personal mission of his own, in order to bring his daughter back.

Nearly everything works in this movie, and all of the stories are fantastic. Benecio Del Toro won an Oscar for his work here, and he really is fantastic as the cop who wants to bust up these cartels, but knows there is a right way and a wrong way to do that. If you do it for money, informing to higher authorities about what you know and getting paid for it, you are just asking for the cartels to come and get you. The way to inform is in careful secret, (like hiding in the trunks of cars,) and not to get paid, but to find a reward somewhere else instead. These stories are dark and gritty and go to some pretty powerful and disturbing places. Caroline ends up in spots that her father would have never imagined having to go search for her in. And Helens never thought she’d be crossing into Mexico to meet with the top dealers herself. There are small things that don’t quite work here (A Dennis Quaid story about wanting to take over the business isn’t given enough time, and the film does kind of telegraph the involvement of General Salazar in the opening scene,) but most of the film is excellent and it is an incredibly powerful and gut-wrenching experience.