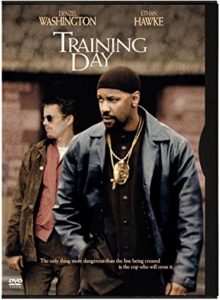 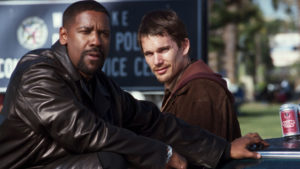 A pretty wild ride through the mean streets of LA as seen through the eyes of one corrupt cop and the innocent rookie he is out to change.

A movie that features one of the great, corrupt villains of the modern era, Denzel’s turn to darkness here is an Oscar winning performance that is well-deserved. He plays Alonzo, the cop who will stop at nothing to get what he wants. This guy is pure evil, and that includes watching his partner get beat down by two homeless rapists in an ally, because he doesn’t feel like jumping in to help. The movie is about one day in the life of both Alonzo and the rookie cop who is training with him, Jake, (Ethan Hawke, also fantastic here.) Only this is no ordinary day. Alonzo owes a lot of money to the Russian mob, and it needs to be paid up by tonight.  And Jake is with him while Alonzo goes from place to place trying to get that money together by any means necessary, (and pretty much all of them illegal.) The way that Jake is on board and looking up to Alonzo, in the first half, and then finds his own arc in the second half, is pretty wonderful. And Denzel is incredibly convincing here, giving us a real portrait of a guy who has always lived by his own rules, and is now facing the consequences of that lifestyle for the very first time.

Training Day is a non-stop kinetic thrill ride. It’s not so much an edge of your seat mystery, or anything like that, but it is the story of a rookie working with a badass higher ranking detective who is corrupt as hell, and watching how far the rookie can be pushed. The reason why it is non-stop is because this thing takes place entirely during the course of a single day, and into the night, and every move these characters make has ramifications. They go from one place, and one stop to the next, and everything furthers the plot a little more.

In most cases, what we take away from the individual scenes and stops these characters make, is just how corrupt the Denzel Washington character, Alonzo, is. This is a role that won Denzel a best actor academy award, and it was well-deserved. The character of Alonzo is evil incarnate, only he’s not evil for the sake of evil. He’s evil for the sake of himself. He only cares about himself, and will throw anyone under the bus, (from an older friend, to his new rookie cop that is out to please him, to his own little boy,) if it gets him ahead.

At the opening of the movie, we see Ethan Hawke’s character, Jake, in bed, waking up to a 5:00 AM alarm clock. He gets up and goes into the kitchen. Pretty soon his wife is in there and the phone rings. She answers it, and engages in a brief conversation with a man who is clearly flirting with her, and then she hands the phone off to Jake. It’s the detective, whose unit Jake wants to be a part of, Alonzo. Today will be the initiation. Jake is going to ride with Alonzo, spending the day with him, and if Alonzo likes what he sees, then Jake can become a part of his team.

The two meet at a coffee shop at 10:00 AM. Time is important here, because it means that Jake got up five hours before needing to be at the coffee shop. Clearly Alonzo is already messing with him. And there first sit down, face to face meeting, at the shop takes it even further. Alonzo won’t let Jake talk. He sits there reading a newspaper, drinking coffee, and tells Jake to shut up while he reads the articles. It’s incredibly uncomfortable for Jake, who is unsure of what to do. Is he supposed to just sit there and not do or say anything?Eventually, he can’t hold it anymore and breaks the silence. That’s when Alonzo asks him for a story, and uses Jake’s story about a police bust to focus on one specific angle… that Jake had a female training officer, and whether or not Jake was banging her.

The boys start their day of police stops and arrests with some college kids who they catch buying drugs on the side of the road. Alonzo insists that it is only weed, and that the guy selling it is his informant. He tells Jake that he allows this guy to sell, so long as the guy tips him off about the big stuff. But then they go and bust the kids and take their weed. Something doesn’t add up. If they only bust the big deals, then why are they doing this? Either Alonzo was lying about the whole thing, and about that guy being an informant, or he really wants the product. If it’s the later, then we’re about to find out why.

He makes Jake smoke the weed. Jake thinks the idea is ridiculous and completely refuses, and Alonzo stops short, pulls out his gun, and holds it to Jake’s head. Later on, Alonzo even cracks a joke, saying, “You did it man. it was your choice. it’s not like I had a gun to your head.” But whether Alonzo was lying about the informant or not, he was most certainly lying about the drugs. It’s not weed that he makes Jake smoke, but angel dust, PCP. Soon Jake is falling asleep in the seat, seeing through a greenish / yellowish filter while looking out the window, and Alonzo has him right where he wants him.

Only something happens that Alonzo doesn’t expect. Jack spots a girl being raped in an alley and hops out of the car. He ends up in a fight with two homeless men who were raping the girl and needs to fend for himself, when Alonzo doesn’t help at all. Alonzo literally stands there, in the alley, watching the whole thing. And Jake pulls it off and takes both of the guys down himself. The reason why this is important is because it is foreshadowing for something that will happen later. This is where Jake picks up his “get out of jail free,” card that he will use later on to save himself from something. And it is only fitting that this is the one situation from the entire day, that Jake decided to do on his own. It’s the one deviation from the path and the plan that Alonzo has worked out for them.

That path includes taking two trips to Roger, (Scott Glenn,) an older friend of Alonzo’s house. The first trip is to see that the guy is there, what condition he is in, and that the guy has no plans for the rest of the day. He’ll be around later on, sitting in the exact same chair, probably significantly more drunk by that point. The second visit is to execute this guy. There are some other stops that come in between, like a visit to wheel chair bound drug dealer Snoop Dog who reveals the name of his supplier as The Sandman. Alonzo and Jake then go to visit a house that Alonzo claims the Sandman lives in, only to find a woman and child, and to steal from them. And then there’s also the visit with the three wise men, who sit at a table in a restaurant, and reveal to us that Alonzo is in trouble with the Russians and that if he doesn’t pay a huge sum of money by tonight, he is marked for death.

This explains why Alonzo runs the raid on his friend,  Roger’s, house. He needs the money. He’s probably been sitting on this guy, knowing that Roger has a ton of money hidden underneath his floor, and waiting on that knowledge for the day that he needs to use it. And today is that day. It might be Jake’s first day working with Alonzo, but the timing sucks. For Alonzo, this day is anything but ordinary. He’s got a mission and timeframe to accomplish it in, High Noon-style, only unlike that movie, we aren’t told about the mission for quite a while. That part of the story is the mystery that slowly unfolds. And sure, sometimes we get it though exposition that is unrealistic, (the Hispanic guys who are hired to execute Jake end up spelling out the last pieces of the puzzle to him, about what Alonzo got involved in, when really they would have no reason to tell Jake this,) but by that point we are so far invested, that we’re just happy to get some final answers,

The movie works because of two main reasons. Alonzo, the character, and the secret mission story. Alonzo is so sure of himself, and so willing to do whatever he wants without ever looking back, that he makes for the perfect villain. He wants Jack to be in on a murder with he and his crew (by the way, notice how much he cares when he shoots one of the members of his crew through the vest, and then cracks jokes about it.) But if Jake’s not in on it, then he’s got a nice and easy back up plan of guys who will handle Jake for him. The way Jake gets out of that situation might seem a little convenient, but it’s nice that it goes back to something Jake did on his own, earlier that day, and it’s much more interesting then if Jake just pulled up some amazing action stunt, or pulled a gun from one of the goons who wasn’t paying attention or something. This is a smart movie. It’s not perfect, and definitely has a B movie feel to it, but the way it all exists in this single day timeframe, and the way that Alonzo has a goal the whole time, and you can trace everything that happens to that goal, (for example, he makes Jake take the angel dust early on so that if Jake does go against his story of what happened to Roger, his story will be completely invalidated.) Everything has meaning here, and everything is part of the plan. And watching the change that Jake goes through, from the start of the movie to the end, is just one more great thing about this film,.