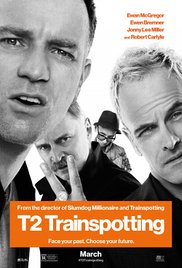 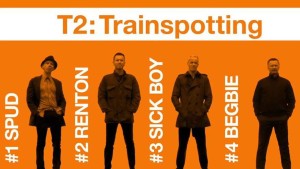 A cool movie that connects and continues off of the original film in all the ways that a good sequel should.

A movie for the fans, this one does everything that fans of the original movie could hope for. It pays tribute to the first movie, rehashes some of the same moments in different ways, relives some of the moments that did happen in flashback, and reexamines what some of these situations actually meant, looking at them in a new light. There is a definite lack of story here, and somehow that turns out to not really be a big deal. That’s probably because these characters are so lovable and fascinating, and we’re just happy to be spending time with them again. There’s no question about it, if the first movie didn’t exist, this one would be nothing special on its own. But as a follow up and companion piece, it works. It’s good fun, and it follows up nicely with the original characters, showing us their lives twenty years later.

Trainspotting 2 is a movie that works, much like the first movie, because of style and characters, more than because of story. The first film told a better story than this one does, to be certain, but even still, these movies are all about style. That first movie boiled down to a film about five guys who were all close friends and heroin addicts,  living a fantasy-filled life, in Scotland. This movie picks up twenty years after where that film left off, and the movie works as a sequel that really does help us relive events from the first movie, and recapture moments that at this point feel like classic scenes. Trainspotting was a cult sensation of a film in the summer of 1996. It launched the careers of actor Ewan McGregor and director Danny Boyle. No h have gone on to be major stars since. Now, they are back together again, along with writer John Hodges, book author Irvin Welsch, and the rest of the cast from the first film, all returning to reprise their roles.

The movie starts by showing Mark Renton (McGregor,) returning to Scotland. He’s been in Amsterdam for the last twenty years. At the end of the first film, Mark ripped off his friends who were pulling robberies and scams. They were bad guys, and Mark said in voice over that he knows they would have all done the same to him, if they had thought of it first. The friends in question were Sick Boy, Begbie, and Spud. Sick Boy and Begbie were the brains behind the scams, (whatever limited brains were needed for these numbskull operations,) while Spud was the biggest heroin addict of the bunch, and his role in the scams was pretty much being just along for the ride. At the end of that first movie, Renton left Spud a good sum of money in a locker, and then high tailed it out of town.

Now, back in Scotland, Renton is here to deal with the consequences of what he did. Finally. He’s here to face his friends and try to make amends. The movie chronicles the way that these guys are now older and wiser. They go by more mature versions of their names, for one. Renton is now referred to only as Mark. Begbie goes by his first name, Francis, and the biggest change of all is that Sick Boy is now only called Simon. And the characters talk about how much life has changed, mentioning cell phones and social media, and all kinds of things that you in no way could have foreseen happening twenty years ago. Trainspotting has always been about guys who want life stripped down to the basics, living in a materialistic world, and while the world around them has most certainly changed, it’s nice to see that these characters are all pretty much the same.

When Mark returns to Scotland, we check in on each of his friends to see what they are up to. Spud has just lost his job and his girlfriend, and is about to commit suicide. Begbie has been serving time in prison and is now about to break out. And Simon is the owner of the bar that the boys used to frequent, and he also pulls blackmailing scams on prominent businessmen, setting them up to be recorded doing sex acts with his girlfriend and then busting in on them to announce the blackmail and work out a deal for payment. Of these three stories, the only one that feels accurate, like this might have been going on for a while and is just a typical day in the character’s life, is the story of Simon. In the case of Spud and Frances, (it’s hard not to call him Begbie, after how much Robert Carlyle did with that actor in the first movie, making his name notorious with crazy, hot-tempered, violence,) the stories seem to conveniently be at this point when Mark arrives back in town. With the Spud story, there’s not really much choice, but with the Frances story, what might have worked a little better would have been if Frances got word of Mark returning to town, and then decided to break out of prison just so that he could go after the man who ripped him off.

When Mark finds Spud, in his apartment, lying on the floor, Spud is in the act of killing himself. He’s got a plastic bag wrapped tightly over his head, and the movie pays homage to a moment in the first film where Mark seemingly melted into the carpet, as a metaphor for a coffin. This time, it’s Spud with the bag on his head, imagining that he is falling off a building. And Mark grabbing the bag from his head is seen as Mark sliding underneath Spud, right as he is about to land on the ground. And then there’s the other part of this sequence, where Spud vomits in the bag that is still over his head, and is clearly meant to be the gross out moment equivalent of Spud defecating in the bed sheets, from the first movie.

The tributes and the call backs to the first movie are really just getting started. When Mark visits certain locations, such as the street where he famously ran away from the police after pulling a robbery, to the turn of “Lust For Life,” in the first movie, he recalls that moment now, and we even see a clip of it. We get little snippets like this throughout the movie, often accompanying conversation where the characters bring up events that took place, and their memories of them. The characters bring up Tommy, their lost friend, and the fifth member of the group, and we see the moment where Tommy came to visit Mark and ask for heroin. Tommy got AIDS from shooting up and died in that first movie. And we see the baby scene with Simon and how his addiction cost him the life of his child.

There are nice call backs to these horrific moments from the first film, as the characters discuss the events on a deeper level of reflection now. In the first movie, they were too close to the events to ever acknowledge their accountability for them, but here, but Mark and Simon realize that they did terrible things and discuss exactly how much it cost them. I particularly love the way that Tommy doesn’t come up until the guys venture out into the hills of Scotland, the scening landscape area where they used to take day trips to get away from city life, with Tommy. That character represented the purity of the first film, the guy who refused to try heroin and was all about taking care of his body, until he couldn’t refuse anymore. The hills represented the beauty of Scotland, and Tommy was the human encapsulation of that. The movie doesn’t go overboard with the references or taking responsibility, however, and that’s a good thing. The porno tape that the guys stole of Tommy and his girlfriend, which led to their separation, and to Tommy turning to drugs, for example, is never mentioned here. But the callbacks are fun and a nice reminder of how young and naive these characters once were.

Even Spud, the character who one might consider to be the least reflective of the bunch, has his own version of this, by writing down memories of events from the past into a sort of collection of memoirs to one day share with his child. On the one hand it’s nice, but on the other, it’s sort of darkly funny, because these are definitely not memories you ever want your child to know about. And when Frances finds out about it, he’s not too thrilled. He and Spud both remember the moment when Frances threw a bar glass over the side of a balcony and then went downstairs to beat everyone up who was upset with him about the injured woman, and Frances recalls the exact words he said with anger, as he goes after Spud. In fact, Frances is the villain of this movie, and the limited plot is in large part about him coming after Mark, seeking his revenge.

Other than that, the story is about the scam and operations that Simon is pulling, and how Mark tries to come on board. The two of them want to open a brothel. They don’t call it that, of course, and instead refer to the place as a spa. They even go before a board and make a proposal about it, and end up getting a pretty substantial loan to open the place up. But there’s the constant reminder of how the first movie ended, with one friend ripping the others off, “first there’s an opportunity, then there’s a betrayal.” Simon’s girlfriend, Veronica, has a major part in this movie, as she is the one who does the trapping work in the blackmailing scheme, and helps bring Simon and Mark back together. She also forms a connection with Spud, at least in the later scenes of the movie. But other than the promise of a brother opening, and the avoiding of Frances, there’s not a whole lot of plot here, and that definitely takes its toll on the movie.

Luckily this film has such great source material (in the ways of the first movie,) and great characters to build off of. We get to see Mark’s old girlfriend, Diane, for a scene where he needs some help. There’s also a new rendering of the Choose Life speech, accompanied by some analysis of what that speech was really about. It’s been quoted for decades now, from here to the moon, but its only in this movie that we really get the back story about what that monologue actually meant, and where it came from. The characters and fast moving style are what absolutely make this movie. Just like in the first one, the dialogue and accents are a challenge to understand, and just like in the first movie, that’s part of the fun of watching these films. But this movie learned from the criticism of the first film and puts subtitles in for the first few scenes, helping the audience get their footing and get used to the way these characters speak, before letting those subtitles go. It’s a nice touch. The movie works as an excellent sequel, really reminding us of why we loved the first movie and also reflecting nicely on the events of that film and what they meant. There’s not a great plot here, and really not all that much going on, but the way that this film presents the next stage in these characters’ lives as a natural progression from where they ended, and does it all with the same kind of humor and energy as the first film had, is a pretty nice accomplishment.