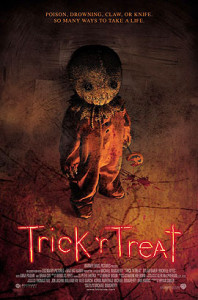 Surprisingly a pretty scary and entertaining film that interweaves between four stories on one dreadful halloween night.

This is a pretty cool movie, very much like a series of tales from the crypt episodes, all taking place in the same night, in the same town, on halloween. there are at least four different stories here, all of them about characters getting punished in unique ways. And the best part is, they are all connected so that you see hints of the characters who later have stories of their own, as flashes or brief moments in earlier stories. This movie mixes monsters with serial killers and ghosts and plays around with the idea that because it is halloween, nobody notices anything strange. Blood looks normal, for example, because it looks like it’s part of a costume. The premise is cool, and even though some of the stories are kind of thin, the spirit and scariness are definitely there.

Trick R Treat is a movie that features five stories in one small town, on Halloween night.. It’s a movie that allows for characters in the stories to also feature in the other stories, which is a pretty neat concept. And while that has certainly been done before, (Pulp Fiction, Sin City, Crash,)  it’s never been done quite like this, where in some stories you learn the ending to stories from earlier on in the night, and in others you get just a glimpse of a story that is going on at the same time, which you will see in it’s entirety later on. This movie really does create the sense that all four stories are happening at the same time, on the same night, and it pulls that idea off pretty nicely.

Setting the story on Halloween night makes the holiday into more of an event. Movies that take place entirely in one night are usually pretty cool. But that and the interconnections are just the beginning. Another thing this movie does is it chops up some of the stories and cuts back and forth, so that we move from one to the next, with a fractured narrative. This means that we are constantly involved in a number of stories at once, and when we’ve had our fill of one, we just jump to the next one. the strategy also enables the movie to keep us guessing and interested and wanting to know more, the way a cliffhanger at the end of a show would. Only brian cox’s story is saved, in it’s entirety, for the end. And even that one has connections and a revelation at the end of it that goes right back to an earlier story.

the movie begins with the town at night and news reports about how this town takes halloween more seriously than others. Here it is a major holiday that everyone celebrates, and the town even has a halloween parade. We see a young couple returning home, dressed in costumes, tired and ready to call it a night. The man goes inside while the woman stays to blow out the candles in the jack o’ lanterns. He warns her against it, saying that you are supposed to let them burn out and leave them all night, but she doesn’t listen. And as she is left there, alone, blowing them out, she is killed. We don’t really see the killer, but when the boyfriend comes back out, looking for her, we see the way the killer left her, out on display, almost like Drew Barrymore hanging from the tree, in the beginning of Scream.

That first scene is  an introduction to the movie. The couple will come in again at the very end of the film, bookending the film, as we get to see a little more about what happened to them, but their story is not one of the main ones. Dylan Baker, on the other hand, does have a main story. He plays a principal named Steven, who is at home with his young son. They have left a bunch of candy out on the porch with a sign asking trick or treaters to be on their honor system. when an overweight boy, who has been smashing all the jack o’ lanterns in the neighborhood, comes up and takes more than his share, he gets an unusual surprise.

That first story is about what happens between Steven and this overweight boy. He and the boy sit on the porch, eating candy together, but when the boy has a reaction to the candy, the movie suddenly goes in a completely unexpected direction. There’s a cool scene down in the basement, where Steven and his son seem ready to carve up a jack o’ lantern, and the movie does a nice job of playing with the audience’s expectations here. By the end of this story, we’ve had two situation where characters disrespected Halloween traditions, and got punished as a result. In the first story, it was the woman blowing out the candles before the night was over (not to mention uttering the line “I hate Halloween.) This pattern of only characters who do something against others or against Halloween, getting killed is a good one, although we never learn what a woman who is bitten in an alleu and left for dead on the side of a parade, did.

After steven’s story, we see a bunch of kids come to the principal’s house and ring his bell looking for candy. He is covered in blood, all across one of his shoulders, but since it is halloween, the kids just think it is a cool costume. They continue on their way, and we will join back with them for another one of the stories later on. but first there is a quick scene with a masked man killing a young woman and leaving her body sitting on a bench out on the street. Nobody notices anything since it is halloween, and there are fake dead bodies everywhere as decorations.

The next story involves Anna Paquin and a bunch of hot girlfriends dressing up, trying on different fairy tale character costumes. These girls all look amazing, and they go off trying to pick up guys to bring to a party. It does seem strange that these girls don’t have boyfriends and that each one of them is trying to pick up a guy who seems kind of lame, but that just makes us want to know more. Are these girls really gonna get with these guys?

The third story is the best. it involves a legend about a school bus filled with disturbed kids who were wearing masks to school one day, since it was halloween. the bus driver was paid to kill them all by their parents, and to drive the bus over the side of a quarry. the kids were the town’s dirty little secret, and their parents had had enough. that’s the legend. the story that we watch has four kids take jack o’ lanterns over to the quarry to leave them by the side of the lake as a sort of sacrifice to the eight dead kids. this story is good for a while, great when we are hearing about the legend, but then not as clever as it goes on. we are more than halfway into the movie, and suddenly things have taken a turn.

The supernatural / monster vibe that started with the kids in the quarry story continues for the rest of the film. It works it’s way into the Anna Paquin story and then comes into play with the final story involving Brian Cox, as an old man, with a secret. He gets an unexpected visitor in the form of a little kid out for vengeance. All four stories have a sort of lesson to them, where bad characters get punished, and that is very much in the spirit of the tales from the crypt horror HBO show, from a while back.It’s great that that these stories are all very different. It’s also cool how there are plenty of secrets and twists here that all come out by the end. Anything that we wonder about during the movie, we do find the answer to by the end of the film. We learn who certain characters really are, and the reasons why certain things happened. it’s not a great movie, mainly because of the way it goes the monster – ghost route for it’s ending, but up until that it was pretty cool. the movie certainly has a lot of neat things going on, and a lot of smart plot ideas. and best of all, it’s actually scary. this is definitely a worthwhile film.

Aside from everything else this movie does in terms of featuring an anthology of stories that are connected, it also as a somewhat historical guide to Halloween. Really, what that means is that it talks about the holiday, the traditions, the rules, and the history. The same way that Scream had characters talking about the rules for surviving a horror movie, this film has characters talk about the rules of Halloween. Always check your candy. Never blow out the candles on a Jack O’ Lantern. Things like that. But it also gets into history with characters talking about All Hallows Eve and the Celtic holiday that proceeded it. They talk about where Trick or Treating came from, as a ritual of leaving things for the dead, and they mention how it used to be believed that this was the one night of the year when the dead and the living were the closest to each other. All of these little touches add to the movie being considered the ultimate Halloween film. Essentially this movie is working on three levels, the interconnections between stories, the all in one night concept, and the Halloween night in a small town concept. Some of the stories are better than others (The Brian Cox story is the weakest of the bunch, but does have a pretty cool ending.) Still as an anthology film that both analyzes the holiday and gives us lots of different stories that are cleverly tied together, this is a pretty entertaining film.