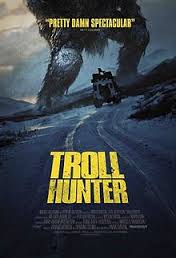 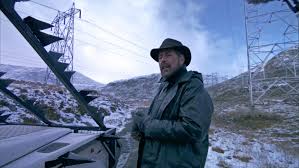 It’s Cloverfield meets The Blair Witch Project, only a lot more amateurish than either one of those.

Trollhunter is a movie with a great premise that unfortunately doesn’t execute as well as it should. The idea is to take the subject of a guy who hunts trolls and to actually take it seriously, as in documentary format. This is not a documentary or even a mocumentary, but a movie about a group of teenagers who are making their own documentary. in that regard, it is like the Blair Witch Project. It often feels a lot like that movie too, with the shaky camera work pointed at the ground as characters run around.

The movie begins with a couple of title screens explaining how this footage was found. Yada yada yada, it’s the same thing as Blair Witch, right? Except, this time it goes a little further. It explains how for some time after finding it, researchers were trying to conclude whether there was any accuracy to this or if it was all just a practical joke. They concluded that it was legitimate.

Now the movie starts. These three young adults beginning interviewing local bear hunters. I guess the event that the documentary is supposedly meant to be about is the finding of a dead bear carcass. The dead body has bullet holes in it. And a bunch of bear hunters stand around talking about it. Apparently this bear should not have been shot and somebody is doing something illegal here. The hunters talk about another man who is not one of them and who they believe to be a poacher. He has been seen around and they talk about their suspicions of what he has been doing.

The three-man crew then decides to start following the poacher. They catch him outside of his trailer and try to get a word with him, but he shuts them out. Then they follow him around in their car, and eventually trail him onto a ferry. They ride the ferry, approach him, and continue to try to get answers, but he gives them none.

Eventually they follow him into the woods and hear strange noises and he comes running out, yelling “troll.” seeing them out here, now, he decides they have come far enough and is now ready to take them in. and so he begins teaching them about trolls and lures one out of the woods. Unfortunately, it does not look as cool as it should. The troll has three heads and looks silly and completely computer made. I know trolls are fake, but at least give us something monstrous and gross, like the giant lizard-like monster in the dungeon in Jaba’s dungeon in the Return of the Jedi. Instead, the trolls we get in Trollhunter look silly, with giant noses. They look like cartoon characters.

I was completely on board with this movie until I saw the troll. The trailer made the movie look great, and it showed the trolls too, but not so close that you could see how fake they looked. And I loved the way the movie began. First the screen titles to make us feel like maybe, just maybe, there were some merit to this. And then the documentary feel with the interviews and taking its time to see the troll.

I love how from the beginning of the movie this was not necessarily about tracking a Trollhunter. It was about kids trying to uncover a mystery about a dead bear. I like how the troll thing was all a surprise, at least for them. And all of this works nicely. The more they don’t show us the troll, the more excited for it we get. A monster movie that shows the monster early on, on the other hand, would be making a big mistake, blowing it’s money shot way too soon.

Here in Trollhunter, it doesn’t. It looks like it was made by hand on someone’s computer. And when the troll hunter turns the troll to stone, it just seems silly. Luckily the next troll is handled a little better with the Trollhunter going after it, under a bridge, and exploding it. That is wisely kept off camera. After that we are in a cave with a bunch of trolls and the footage is very unclear.

Finally, we are with one last troll who again looks way too fake. I like all of the stuff about waiting in a cabin, looking out the window, feeling scared, and listening to the outside noises. But once we see the troll, that fear goes away. I wish the effects had been a little better. All of the talking and discussion about trolls is great. It’s the actual trolls themselves that are not as cool as they should have been. The movie is certainly ambitious, but it doesn’t have a great plot or great monsters, and so it ends up being just okay.