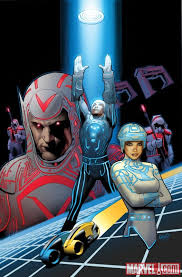 A movie that definitely has a cool premise, but then gets carried off into territory where we stop caring, and where all that was interesting at the start of the film is left way behind, never to be heard from again.

This movie has some pretty cool ideas to it, but all of them get lost in the second half. The sequel, Tron: Legacy, is superior in every way. With this first movie, we have one of the original pioneers of combining animation with real life actors, and the effects just weren’t there yet. While the ideas might be cool, none of it actually looks very good. But all of that is hardly the big problem with the movie. The big problem is that for more than half the film (the second half,) the storyline and characters get lost in an empty plot. There was a lot of potential in the first portions of this movie, with an evil executive, an all-powerful computer operating system and a renegade antihero out for vengeance. How this movie managed to screw all of that up is pretty unbelievable. By taking the character out of the real world and into the video game world, it actually lost whatever momentum the real world storyline had already cooked up. Now other movies (such as The Neverending Story,) have been able to pull this kind of thing off, by checking back with the characters in the real world every now and again. Tron never does.

Tron, the original film, was something kind of unique when it came out in the mid-eighties. This was the time when hand drawn animation was first being paired up with live actors. So we were getting movies like Who Framed Roger Rabbit and Cool World. Tron actually came about six years before either of those movies, and was one of the original pioneers of this technology. It shows. Roger Rabbit is the movie that gets all the credit for bridging the effects together, but that’s only because it looked the best. Tron did it first, but the results just weren’t nearly as good.

The story behind the movie isn’t so great either. Now that’s really unfortunate, because the initial premise and world that have been created here are incredibly cool. It’s just that where this ends up going and the execution of the plan, are not. At the start of the movie, we travel into an arcade called Flynns, where young people go to play video games and hang out. We travel inside one of the games to watch characters racing around on bikes that go so fast they basically turn into laser beams. We also meet some of these characters when they finish their race (inside of the game still.) The game characters talk about who they are and what they are doing there. This is pretty neat, and definitely has some Wreck It Ralph elements going on, about what happens to the characters inside the machine once the game is over.

Meanwhile, back in the real world, where we began with the arcade, we are now introduced to a corporate headquarters building where the people work who make and design these games. We see a man talking to his operating system which is like a voice that is all around him, in his office, controlling everything electronic. This is like Jarvis from the Iron Man films, only here the operating system has got a menacing voice and ends every conversation by saying “End of line,” in a deep, dark tone. The operating system notices that somebody has been hacking into the system, looking for something.

This leads the executive to call a worker in and announce that he is restricting everybody’s security clearance. Since he doesn’t know who to trust, the executive decides to just not trust anyone. The worker has his access taken away and immediately goes down to the basement floor to consult a female technician (who we later find out is his girlfriend.) They both know exactly who it is that’s been hacking in, and decide to go pay this person a visit and find out the reasons why.

Flynn (Jeff Bridges) is the man who has been hacking into the system. He’s also the guy who owns and runs that arcade we started the movie in. Flynn used to work alongside these two at the corporate headquarters. He was a video game designer and claims that this game, which everyone now plays religiously, was all his invention. Flynn claims that the company fired him and stole all of his work. The reason why he’s been hacking into the system is to look for proof that he is the real creator of the game.

All of this is fantastic. If this continues to be the story, then it would have made for a great film. You have back story, betrayal, and a renegade anti-hero. The problem is that the movie doesn’t keep it up. In fact, I would say only about one fourth of the film takes place in the real would before we travel into the game and pretty much stay there for the duration of the picture. Before that happens, Flynn and these two game technicians break into the building together by way of a rooftop entrance. The door that lets them in is incredibly thick, and pretty cool. Flynn gets inside and jumps on a computer. The operating system with that deep, dark voice catches him and fires a laser beam at Flynn that freezes him and then transports him into the game.

From here, we spend the rest of the movie in the game. No checking back with the real world at all. Flynn meets two other characters inside the game, and quickly becomes friends with them. One is named Tron, and he is the character that Flyn’s friend (the guy who came to him about the restricted access,) created. These characters are called programs.

Once inside the world of the video game, Flynn finds himself involved in competitive sport where the characters get scooners, (sticks with handles on one end and thin catchers on the other, meant for catching and throwing a ball. It’s a primitive game to be playing in the future (I think this game was created by Native Americans hundreds of years ago.) The idea is that you catch the ball and then throw it at a reflector disk in the sky and it hits that and then comes down the other side at the opponent. The reflector in the sky part is pretty neat.

There’s also a brief racer scene on the motorcycles. It’s so heavily animated, that all we are really watching is straight lines moving forward (meant to be the characters riding so fast that all we dan see is the lines.) This movie had a sequel of sorts, called Tron: Legacy, in 2010, and that film, with state of the art special effects, got all of this right. The throwing something at your opponent competition, (in that movie it was the disks from their backs, thrown like frisbee,) the motorcycle racing, everything. In this first film, however, it doesn’t work at all. The effects just weren’t there yet.

After the ball throwing competition and the brief motorcycle race, the fun really stops. For the rest of the movie, our characters pretty much wander around hoping to come across some answers. It gets very dull very fast. The most exciting thing that happens is they find some water and lay down to drink it. To make matters worse, this movie really botches it’s ending. The one thing you assume is that the movie will end in the real world, showing what happens to the villain and the characters who began the movie. This one doesn’t. We quickly cut back for one silent scene with the villain and that’s it. Maybe we will get some answers about that happened to that villain in a scene with Flyn and his friends, right? Nope. This movie doesn’t seem to realize that we were invested in the story that began the film. Instead, it focuses much more of its time and energy on the story of what happens inside of the game, and that ends up being a recipe for disaster.