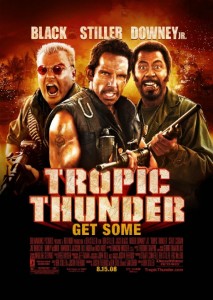 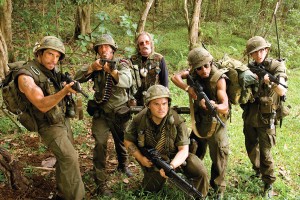 A hilarious and creative movie about a behind the scenes film experience that turns into an actual action movie.

Tropic thunder is a modern masterpiece, although it does take multiple viewings to really appreciate it in that way. this is because there is just so much going on. it’s too much to take in all at once, on a first viewing. there’s a multitude of fantastic characters, each one funny in his own way. there are the actors who are making the movie, including an australian actor who is playing a black guy and hitting every cliche in the book. he’s played by Robert Downey Jr. in the most unforgettable role of the film. but there are others that come pretty close, such as a studio head, played by Tom Cruise, who is equally vulgar and disgusting, while demonstrating both his anger and passion every chance he gets. aside from the actors and characters, the story is also a lot of fun, having a movie within a movie kind of plot. this film makes fun of everything, from the actors and their thoughts to the way the hollywood industry works. it’s not only a spoof on movie making, but also an action-packed war movie. this one really does have it all, and it makes the smart decision to put the comedy front and center every step of the way.

the downey jr. situation is the funniest part of the movie and what this movie will always be known for. it takes a lot of guts to do black face or anything like it, and one always runs the risk of being considered a racist. only somewhow downey manages to pull it off, and he doesn’t exactly do it by making this black guy politically correct. just the opposite, he makes his character a walking cliche of a southern, poorly spoken black man who grunts and shouts and is pretty much a mess. but the movie makes fun of this. instead of making fun of the black guy, it makes fun of the fact that an australian actor would think that this is how all black people talk. the movie is smart enough to include a real black actor in the cast, alpa cino, played by brandon t. jackson, and alpa calls kirk lazarus (downey jr) on the racism every chance he gets.

the three main actors definitely make this movie what it is, with all three of them bringing their a game to the table, but aside from that, there is a fantastic plot about a sort of movie within a movie. this is the movie about the making of a movie, and when that film that they are making becomes a disaster, the director (steve coogan), has the idea to take his five main stars out to the middle of the jungle and drop them somewhere and just rig the jungle with cameras and explosives. this way he can just film and get real reactions to things.

the problem is, this is incredibly unsafe in all sorts of way. their are enemy drug lords in the forest as well as old land mines on the ground. the director barely completes his motivational speech about what he plans to do, before he steps on one of the mines himself and gets blown up. the moments that follow, where tug speedman (the ben stiller character), finds the director’s head and thinks it is a prop head, are hilarious. he is insistant that this is all part of the movie, and just a gag that is meant to fool them, and he goes to all kinds of lengths to prove it, including doing some pretty funny things to the head.

the movie within a movie concept is the perfect original storyline for this film. for one thing, the movie becomes a spoof on hollywood in ways that most movies don’t dare to approach. that includes fake trailers in the beginning for movies that all look incredibly dumb, but at the same time, probably could be real films. and then there are lots of scenes of the set, the agents, and the producers. two of the main characters here, who are not on the set in vietnam with the boys are speedman’s agent, and the head of the studio, who has invested his money into this film. both characters are a lot of fun.

the agent is played by matthew mcconaghey in a role that i believe was meant for owen wilson. mcconaghey has that same kind of beach bum, surfer dude lool that wilson does, and he handles the role perfectly. he’s a fool, just like speedman is, and cares only about superficial things. in almost every scene, he’s in his office playing wii tennis, or trying to find out why speedman doesn’t have tivo as if it is a life or death mission. and he is matched pretty nicely by the studio head, les grosman.

this character is played by tom cruise in what has got to be his best role in ages. the last time cruise was this good was probably in magnolia, well over a decade ago. in that film, like here, he was playing a total jerk and whack job. in both movies he got to be over the top and out of control. here, in tropic thunder, cruise has a blast with the role, shouting profanities in the most vulgar of ways and making you believe that he can crush anything with just his temper alone. the first time we see him, grossman is having the key grip on the movie set punch the director for him. it’s as if grossman is able to extend his own hand to deliver the powerful punch to the face. it gets better. when grossman gets on the phone with a terrorist group, known as flaming dragon, or when he deals with mcconaghey’s agent who shows up demanding tivo for his client, tom cruise just lets loose.

and while all of that is going on behind the scenes, the stuff happening with the movie is as funny as anything else. ben stiller directed the movie, and he’s also the real star of the film, playing the guy who gets separated from the others and has to make it on his own. his character, speedman is so dumb that he is sympathetic and incredibly likeable. and his relationship with lazarus has speedman coming out looking like a fool after every one of their conversations. there’s the classic “never go full retard,” conversation (apparently this movie got some flack for not being polictically correct with that, but isn’t that the point?) and then there are a whole bunch of others. these two guys represent complete opposites in every way. lazarus is the artistic actor and speedman is the action star. lazarus is the deep thinker and speedman is the simpleton. and with the plot of this film, lazarus is the one who knows they are really in danger and speedman believes it’s all a big joke. the other three men in the group seem caught in between.

aside from brandon t. jackson (whose booty sweat is just great, completey ridiculous and funny because of that, just like most things in this movie), there’s also the jack black character, jeff portnoy, and a hard working, smart kid played by jay baruchel. each of these characters is great, but i think jack black in particular hits it out of the park. he’s the guy who really makes this movie for me. it’s like everyone knows how great downey jr. is playing a black guy, and ben stiller is the likable dopey star, but jack black is the x factor who pushes the movie over the edge, playing a guy who is obsessed with only one thing. his jelly beans (i mean drugs!)

tropic thunder works on all sorts of levels. the first time most people see it, they don’t realize how funny it is. that’s because the jokes are often stupid, and are made that way on purpose. they take time to be appreciated. but even if that’s true (and i am one of those who did not like this movie the first time i saw it), the plot is still incredibly clever and the actors are all playing really interesting and unique parts. like tom cruise in this movie, the jack black character is his best in ages. everybody is taking major chances in this film, going out on a limb to be creative and different. this movie is a love letter not only to vietnam movies like platoon and acopalypse now, but also to the way that movies are made. i’m glad the film was written by an actor (justin thereoux), and directed by an actor (stiller). they really know the industry and have opinions about it, and this movie has a lot of fun making cracks about every facet of it.