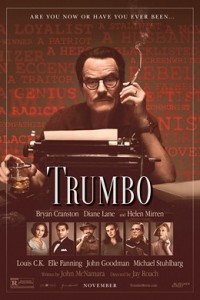 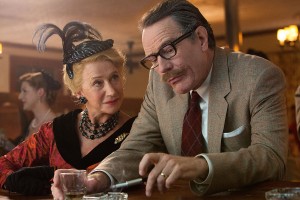 A very good movie that tells a powerful story and only has one real flaw… that it is just too long.

Trumbo is a powerful movie about a fascinating time. It’s the film about the red scare and how it came to Hollywood and took the industry by storm. This is the time of communists in America and writers and actors getting blacklisted simply because of their beliefs. Bryan Cranston plays Dalton Trumbo, the leader of the Hollywood Ten, a group of writers who find themselves on the wrong side of popular belief. They fight for the right to say what they want and to think and speak freely. Unfortunately the country considers these men a danger. What makes this movie work in ways that other films about the topic, (such as Good Night and Good Luck,) didn’t quite, is the way that it shows us the story as a part of the Hollywood industry. That includes getting great impressions and multiple scenes of actors we have known and loved, like John Wayne and Kirk Douglas. It also includes hearing stories about how films like Roman Holiday and Spartacus got to be made. When the film sticks to the Hollywood industry, it works. When it tries to go outside of that, and touch on things like Civil Rights, it doesn’t quite have enough going to do those other stories justice. Mostly this film soars and entertains. The second half slows down a little but the first half is nothing short of magnificent.

Trumbo is a pretty interesting movie about a time in American history when the first ammendment was trampled on, and Americans who believed in communism were considered soviet spies. It’s a movie about the hearings and the Joseph McCarthy Red Scare of 1954, but even more than that, it’s about the Hollywood system and the famous blacklist of actors and writers and directors who couldn’t get work. If you were blacklisted, then you were finished in Hollywood. Dalton Trumbo, the protagonist of the film, as played by Brian Cranston, is pretty much the leader of the pack. His story is about how he goes through this tumultuous time, keeps his head above water, and manages to survive.

The titles at the start of the film explain that after the Great Depression, many Americans became communists. When you think of what the country was going through during that time, it actually makes a lot of sense. People were frustrated with the system, which had clearly failed them in all kinds of ways, and were looking for something different. That was fine until the end of World War II and the start of the Cold War against Communist Russia. All of a sudden Communists became the new enemy of the country.

Now there have been other movies about this topic, but what makes this one so interesting is how it shows the way the struggle moved through the Hollywood industry. Perhaps the coolest thing about this movie is the way it features actors of today playing classic actors of that time period in their lives away from the silver screen. There’s Edward G Robinson, John Wayne, Director Otto Preminger, and Kurt Douglas. And each one of these actors has multiple scenes and some real significance to the storyline of the film.

At the start of Trumbo, we watch the filming of a black and white movie. It’s an Edward G Robinson film, (Robinson is played by Michael Stuhlberg, the great actor from A Serious Man,) and there’s a problem with the take. Cut to color and real time, and we see Robinson comment about how this happens the day that the writer is among them. That’s when the director responds that he’s among them, but certainly not one of them. This dialogue is so rich, because it tells us so much. It tells us that Robinson cares that the writer is there and respects him. It tells us that Trumbo is the writer. And it tells us that the director has animosity for Trumbo and does not consider him an ally in this industry, but more of an outsider who is the enemy.

From here we go to a party where the director and Trumbo have a heated argument and it is Robinson who gets in between them, lightening the tension by taking the director out for a dance.The movie continues to build, introducing us now to Hollywood former actree turned newspaper columnist Hedda Hopper (Helen Mirren,) a woman whose mission in life is to put communists out of the business and even get them arrested. Her son is fighting oversees, and she believes these guys in Hollywood undermine everything that her son is fighting for. Hopper has some words with Trumbo and then leaves.

The party is over, the movie is released, and Trumbo goes to see it with his family in a theater. Only at the start of the film, there’s a news reel of footage, and wouldn’t you know, it’s all about the commies in Hollywood. Hopper is the one presenting the news on the screen and she talks about Bogart and Bacall, standing up for workers rights, as well as Robinson and Trumbo. After the movie has come to an end, when Trumbo and his family are in the lobby, a man approches him, asking if Trumbo was the man featured in the news reel. When Trumbo answers that he was, the man throws his coke in Trumbo’s face and walks off.

All this is the introduction. It gets things going and tells us what the scene is like out there, but things get really interesting when a meeting at Robinson’s house turns into this group of writers and actors showing up at a meeting of the House of Unamerican Activities, and Trumbo exchanging words with John Wayne. The Wayne impression is pretty fantastic. If the Robinson impression isn’t great, and all that’s really captured there is the look (on occasion,) then the Wayne impression is the exact opposite. This actor gets the voice, tone, and mannerisms down perfectly. And the exchange between he and Trumbo, regarding how Wayne never fought in World War II, but these others, who are now considered enemies because of their beliefs, actually did.

Things turn even uglier when Hopper starts putting her foot down around Hollywood and making threats. She gets the studio head who signed a contract with Trumbo to break the contract and announce publicly on the news that no studio in Hollywood will be working with any member of the “Hollywood Ten.” At that point, Trumbo continues to write, only passes off his scripts to writer friends who are still working and are willing to split the profits. One of these scripts is for Roman Holiday and there’s one scene in a diner where Trumbo and his friend are discussing it. While they really only talk about the title, hearing how it evolves to what it ends up being called is pretty entertaining.

When two judges on teh supreme court die, following Trumbo’s testifying before the House of UnAmerican Activities, it spells bad news. Trumbo and all of his friends, including a man named Arland, (an excellent Louis C.K. in a serious and dramatic role,) end up going to prison. We get a handful of scenes in there, including one of Trumbo listening to Edward G Robinson go before the board and name names. And thenTrumo is released. Considering how detailed everything has been up to this point, it’s a shame that we don’t get to hear much about how or why he is being released. Is it simply that his time is up? The movie never mentions a thing about this.

The second half of the film is all about Trumbo getting back on his feet. He does that by taking low level jobs for a B movie studio that makes alien and monster movies and is run by two guys named the King Brothers (John Goodman and Stephen Root.) These guys hire Trumbo and his friends, put made up names on the scripts, package them and sell them off. There’s that story and the story of how Trumbo used this relationship to take on bigger and bigger projects, from a movie called The Great One, (which won the best writer oscar,) to Spartacus and Exodus. It’s all pretty terrific, and the only problem is that the movie tries to do a little too much. For example, it starts to get into civil rights with Trumbo’s daughter taking the side of black people and sitting at counters with them. Not every topic needed to be explored in this film, and if the movie doesn’t have time to do something like civil rights justice, then it really shouldn’t attempt to touch on it. The film is at its best when it stays true to the story of communism. There’s a great scene early on in the movie where Trumbo explains to his daughter exactly why he’s a communist, using an example about a sandwich and sharing it with someone who doesn’t have any food. This kind of personal note is what really drives the film. When the movie stays within the industry or sticks to the communist struggle, it soars. When it tries to do other things, (like showing us Trumbo as a lousy father, during a birthday party scene that feels out of place, considering it’s the first time we are seeing Trumbo like this, and yet comes so late in the film,) it doesn’t work nearly as well. Still, there is so much to like about this movie, including fantastic performances from Cranston, Louis C.K., and a deliciously evil Mirren, not to mention all of those fun impressions (The Kurt Douglas one is another treat,) that the movie definitely works.