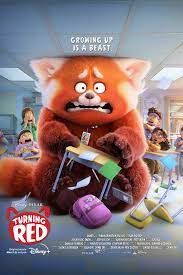 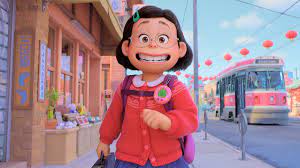 An entertaing, light-hearted movie about family life and turning into a giant red panda, this one isn’t great, but it is good for a few laughs and a decent story.

It would be nice to be able to say that Disney and Pixar have done it again, and come up with another fantastic movie, but this one is something different. It’s definitely a step down from top-tier movies like Onward, Encanto, and Raya and the Last Dragon, or middle tiered movies like Soul and Luca. This one is towards the bottom, and yet it’s still okay. The movie is about a teenage girl having teenage problems. Those include friends, boys, trouble with her parents, finding her own identity, and a giant Teen Wolf-like red panda transformation. There are some fun moments and ideas here, from time to time, but ultimately this one is pretty forgettable.

Turning Red is an okay movie. It’s the first real Chinese movie from either Pixar or Disney (unless you count Raya and the Last Dragon, which was about a fictional world but featured a Chinese voice cast.) But Raya felt like a step in the right direction, and Turning Red takes things even further. This one is about Chinese-Canadian characters, whose cultural identity is a huge part of the movie. Raya was Disney and Turning Red was Pixar, and both movies unfortunately went right to steaming, in large part due to the pandemic. The next step for Pixar or Disney would be to set a movie in actual China, which is something they really haven’t done since Mulan (which got a live action release about a year ago, but was also sent straight to streaming due to the Pandemic.)

For Turning Red what we have here is the story of this Chinese-Canadian teenage girl named Mei, who is thirteen, and feels like she is being pulled from two sides at all times. She is clearly the product of two different cultures. With the Chinese culture, there is her family. Her parents make a living by running a temple that is devoted to her ancestors, and they give tours of this temple to anyone who comes by. Mei’s mother, Ming, runs the tours, and Mei helps out after school each day.

And then there’s the friend side of things. The Canadian side. This is really the teenage story, as Mei is part of a group of four girls, who hang out together, sing songs together, fantasize over the boy band they are in obsessed with (Four Towns, which is actually composed of five guys, and this questionable band name is definitely brought up by the film,) and crush over the clerk at the local convenience store. Mei, in particular, draws pictures of the boy in a sketch pad she hides underneath her bed, and when her mom finds the pad, all hell breaks loose.

This is the catapulting event that triggers things and sets the problems of the story in motion. Ming, the mother, finds the pad, flips through the pictures, and thinks this teenage Clerk is doing something to her daughter. She then takes Mei to the store with her to show the Clerk the drawings and accuse him of doing something to her daughter. It’s all very weird. But nothing near what Ming does to her daughter when she thinks Mei is on her period. We’ll get to that one. First, there’s the mom and Mei returning home after the convenience store incident, where Mei’s enemy, or the kid who bullies her at school, Tyler, right there at the store to see the whole thing.

That night, Mei has some terrible dreams. There are creatures in her dreams coming after her, or something of the sort. And there are actually things happening to her physical body in the bed, while she is dreaming. It is a little like the PG version of Rosemary’s Baby, the night she is sleeping, but her husband has his way with her, and we see things from the point of view of Rosemary’s dreams. So now Mei wakes up, and she is a giant red panda. She looks in the bathroom mirror, does a double take, and then completely freaks out. Only she can’t be too loud because her parents are right downstairs. Even still, they hear some of the commotion and rush upstairs, at which point Mei hides in the shower. And her mom takes all this to mean that Mei has started her period.

Mei transforms back to a kid, only now she has red hair. She goes to school, and is starting to figure out that she turns into this red panda whenever her emotions get too high. And as she’s sitting there in class, figuring this all out, her mom shows up outside of the window, hiding behind a tree, spying on her. A security guard chases the mom down, and the mom runs to the classroom window waving a box of pads that she has brought for her daughter. How ridiculously embarrassing. So the mom actually thinks it’s a good idea to announce to the whole class that her daughter is on her period? On the one hand, this is funny, on the other, it is a little too much.

Mei turns into a panda again and this time the mom sees it. So now she knows. And it turns out that Ming knows more than she has let on. Ming has had this red panda thing in her family for some time. Her mom (Mei’s grandmother,) turned into a red panda. The ancestors and women in the family who are older than her mom, (like her Aunts, the grandmother’s sisters,) turned into red pandas. And knowing this, and that it would one day happen to Mei, the mom never thought to tell her? Really? Of course the mom gives the classic excuse of “I thought it was too soon and still wasn’t going to happen for a while,” but c’mon. At least in Teen Wolf the father’s excuse for not telling Michael J Fox about the hereditary transformation was that sometimes it skips a generation. Here, there is no excuse at all. The mom knew it was going to happen and said nothing, leaving her poor daughter to figure it all out on her own.

In case you haven’t figured it out yet, the mom is the antagonist of the movie. Not Tyler, the kid who is more annoying than an enemy, but actually the mom. Now that gives the movie the opportunity to explore some very real concepts in Chines familial culture, where children are expected to be perfect and not to disappoint their parents in any way. And here, Mei has plenty of her own interests, such as her love of Four Towns, that she feels she has to keep a secret from her mom. In fact, there is a big Four Towns concert coming up, that Mei and her friends get tickets to, but Mei feels she needs to keep a secret from her mom, (who calls their music “stripper music.”)

The mom has other ideas in mind for Mei, and these include first getting rid of the red panda. Ming’s mom, Mei’s grandmother, named Wu, shows up with a bunch of other elderly Chinese women (most likely Wu’s sisters,) and each of them has a red panda spirit trapped in a necklace they wear at all times. The goal is to get Mei to trap her own red panda spirit in a similar way. This will have to happen on the night of the red moon. There’s just one problem. That night is the same night as the Four Towns concert. And all of this leads to the climax. But before we can get there, Mei has a falling out with her friends when her mom finds out about how Mei has been using the Red Panda to make money to buy tickets to the concert, and completely blames Mei’s friends for the whole thing. Instead of standing up to her mom and telling her mom that it wasn’t the friends’ fault, and that Mei wanted to do this herself, she backs down and lets her friends take the blame. This naturally causes a fight.

And that brings us to the night of the concert, the night of the ceremony, and the opening of an astral plane. Now, I know climaxes have to be big, and be the most exciting part of the movie, but this one might be a little much. We literally have a character who turns into a version of a Kaiju, (thank you Pacific Rim, for teaching us that word,) terrorizing the city as  a giant walking monster. And then there’s the astral plane itself, a gate to another dimension. What is much more interesting is the story between Mei and her friends and how that gets resolved. Or between Mei and her mother, when they actually get to talk about the issues instead of battling it out over the city like a Godzilla fight. The ending is a bit much, and the overall story is just okay. The dynamic of how Mei feels like she is being pulled from two sides, with her mom and her friends is great, but then there are a whole bunch of moments and ideas that don’t feel right… the mom not telling her about the red panda being the biggest one. There’s an okay movie here with some pretty good plot points that are just taken in the wrong direction or not given enough time to really get into it. The problem with the friends, for example, gets resolved way too easily. This movie definitely has some interesting ideas going on,  but it doesn’t take most of them as far as it should, as it is more focussed on spectacle than storytelling or emotion.