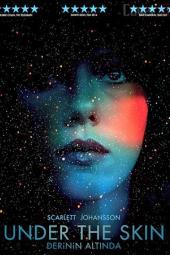 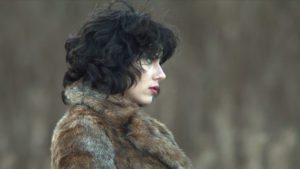 What a strange movie. And that’s putting it mildly. This is a film about an alien woman on earth who seduces and kills men (we’ve seen that before, with Species,) and it’s a fine enough premise. But the movie treats this plot like that of an artistic, independent film where everything moves slow, is quiet, and exists with as little dialogue and action as possible. It’s often a challenge just ti know exactly what’s happening or why it’s important (if it is,) to the story. Things that happen feel very insignificant, as if the movie is just wasting a lot of time. Once in a while something remotely interesting happens, but for the most part, this movie is a stinker.

Under the Skin is about as artistic and weird as it gets. At least today. Sure, a few decades ago David Lynch was making movies weirder than this (Eraserhead for example,) but that ship has sailed, and today, you generally don’t get movies that far gone. And if you do, you don’t get them featuring major movie stars, created by experienced and established directors. And yet Under the Skin checks all of those boxes. The movie stars Scarlet Johansen a number of years after she entered the Marvel films as Black Widow. So she was fully established and red hot at the time. And the director is the guy who made Sexy Beast and Birth, two smart and creative movies.

And yet both of them decided to make this duller-than-hell movie about a woman who lures men to their deaths. That one liner premise sounds fine and potentially intriguing. Nothing dull about it. But the movie doesn’t really show the deaths. All it shows is the men walking into a black goo or pool of water. That’s it. We’ll get to those parts later, as they are probably the best parts of the movie, which isn’t really saying a whole lot.

At the start of the film we are with a man on a motorcycle as he parks his bike at night, goes into the bushes, and pulls out the lifeless body of a young woman. He brings the body indoors somewhere, and leaves it for someone else..a naked woman (Scarlet Johanssen.) The naked woman, called “the Female,” in the credits, is in an all white room with no disernable walls or floor. Just white all around her. And she now undresses the lifeless body of the woman. We see that there actually is a little life in this woman still, as a tear rolls down her cheek. The Female takes the clothing and gets dressed. It’s very Terminator 2 in that regard.

And now the female goes hunting for men. By hunting, I mean driving around in a van, stopping men who are alone on the street, and asking for directions. After getting the directions, she always asks the men where they are going, and if the answer is that they are going in the same direction where she is headed, she offers them a ride. Once the men are in the van with her, the famale starts coming onto them, until the next thing you know, they are back at her place.

And this is where the black goo comes in. A man will follow her into the house, and then into an all black room. The female will walk forward and the man will walk after her. And slowly the man will start walking into a pool of black water. Yet instead of stopping and asking questions, like why is the female not walking into the water, he will just keep going. The man will never say anything, and just get deeper and deeper into the water. And it appears that the female is actually walking on the water, whereas the man is going underneath it.

Now, maybe it’s that the black goo causes the man to not be able to speak. Maybe it’s that once the man steps into the goo, he falls into a sort of trance, where he can’t stop walking. None of this is ever explained. In fact, nothing in this movie is ever explained. There’s something to be said about poetry in movies and making the audience have to figure things out, but there’s also something to be said for giving some answers. Some closure. Without those, we are just watching cool visuals without much meaning. At least give us clues, like showing a man trying to talk, but unable to. This movie doesn’t want to give the audience very much to work with.

We see three men get taken in the first half, or so, of the movie. Two of them we see go into the black liquid. With the third one, we follow him into the liquid and see his point of view. While down under there, he comes across the body of the last victim. He walks over to it, touches the man’s hand, and the man’s body crumples up into a shriveled ribbon. Cool visual I guess, but what does it mean? Who knows.

The next man that the Female picks up has a facial disfigurement. In fact, he looks quite a bit like the Elephant Man, (also a David Lynch movie.) After talking with him in her van, and learning that this man has never had a relationship of any kind of been with a woman before, the Female still takes him back to her place and gets him to undress. But then she lets him go. Does this mean she feels bad for him or that she is becoming more human in her feelings or both?

The movie goes on this way, with these quiet encounters spaced out throughout the film and very little happening in between them. There isn’t even really background music here. Just single chords being played to add to that quiet, indie feel. This is grainy and dark and cold and way too uneventful. A movie about an alien who has come to take something from the men she encounters is a cool idea. We’ve seen it before in the nineties movie Species. But if that movies was sci-fi meets horror, this one is barely either one of those genres. It is simply artistic, and nothing more. And artistic in a way that definitely does not keep you excited.

The female’s final encounter is with a logger in the woods who tries to molest and rape her. He ends up tearing her skin. She gets away and pulls her skin off to reveal a black featureless creature. The logger burns her and that’s about it. Again, no answers are provided, other than what she looks like under the skin. This movie doesn’t seem to care about giving answers to the audience. It doesn’t want to thrill or excite in any way, but instead wants to exist as a puzzle for audiences to ponder over and try to figure out. The problem is, by being so quiet and dull, I’m not sure too many audience members will care to take the time to do that.