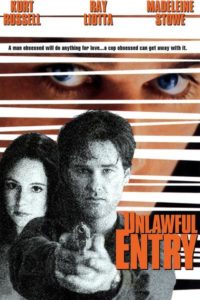 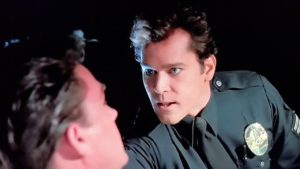 A solid thriller that seems like a B movie, but turns out to be pretty smart and exciting

This movie might be simple in it’s premise, but it’s actually pretty deep in it’s character study. Particularly the Ray Liotta character, Pete Davis, a psycho cop who develops an infatuation for the wife of a guy he helps deal with the aftermath of a robbery. Pete wants this guys life, and the way he goes about pursuing it is pretty compelling. This is a great movie for witnessing how a situation gets really far out of hand and keeps escalating into worse and worse circumstances. It definitely has a B movie feel at times, but the actors keep it grounded and make you care. And it helps that the story is so based on what seems like plausible situations, that so much of it takes place around the house, among other things, because it the whole thing very relatable. This is a pretty cool thriller.

Unlawful Entry is a hell of a movie. Here you have this seemingly very basic storyline about characters with carnal instincts that don’t even try to hold back or disguise their ambitions. It makes for a compelling character study. But let’s not give this movie too much credit too quickly. After all, it does look and often times feel like B movie shlock. But with these superstar actors playing the leads, it’s hard not to get wrapped up in this thing. Especially when the story is so simple that it feels like it could easily happen to anyone, given the wrong set of circumstances.

So what is that story? A man and his wife are out home one quiet evening when a burglar breaks in. The man is Michael Carr, (Kurt Russell.) His wife, Karen, is played by Madeline Stowe. And so the two of them deal with this home invasion, meaning fight off the burglar and chase him out. But that’s just the beginning of their troubles. They call the cops, and get two nice officers over to take the report. Only one of these officers, Pete Davis, (Ray Liotta,) is more than a little unstable. When the couple calls him the next day, to help getting the police to dust for finger prints and set up an alarm system, Pete begin to develop an infatuation with Karen that does not go away.

And so the stalking begins. Now this isn’t Robin Williams looking at photographs in 1 Hour Photo or watching from afar like a voyeur. This is a movie about a guy who takes what he wants. After all, Pete Davis has the law on his side, and isn’t afraid to use it. But that all comes much later. In fact, it’s the first half of this movie that really excels, whereas the second half – when things escalate to levels that are a little too high, often feels kind of clunky. But the first half is all filled with carefully placed pieces and moves, like a chess game. It’s interesting to see how this whole thing unfolds, and how things can get as bad as they do, gradually, through the course of a number of steps in the wrong direction.

Pete helps with the alarm and the dusting of prints, and the next thing you know, Michael and Karen are inviting him to stay for dinner. Now that’s their first mistake. This guy is not their friend. Sure, he was doing them a favor, but by sitting down for dinner and drinks in their back yard, they are socializing with him in a way that is definitely off the clock. Of course, this is hardly their fault. How could they know who this guy would turn out to be? But it’s the first mistake they make, and live to regret as this tale continue to spin out. The next one is Michael going on a ride along with Pete and his partner, officer Cole.

The ride along is especially interesting for a number of reasons. The first has to be the dinner scene. The cops take Michael to their favorite fast food joint, a place where they grab some quick Mexican food straight from the kitchen and sit down at outdoor tables to eat up. Roy even tells Michael this food is the best in L.A. Only when Michael opens his container and looks at it, his face says everything. The food looks disgusting to him. And so he tells the guys that he just ate, and shuts the container. And this seemingly minor scene actually says so much. Michael is so above their level that he won’t even eat the same food as them. This is the food that they consider the best in LA, something that they clearly get on a regular basis, and Michael won’t even try it.

Things get worse that night. Much worse. Pete drops Roy off at the station and then takes Michael out for one last bust. And its a big one. Pete knows where the guy who broke into Michael’s house is. And he grabs him up. Then Pete forces the guy to his knees and bates Michael into hitting him. The guy apologizes to Michael, which seems to be enough for Michael to give him a pass, or at least just watch as he gets taken in. But that’s not enough Pete. He insists that Michael hit him with his night stick. Michael refuses and throws the night stick to the ground. This is his second time refusing Pete, the first being the food from earlier. And when Pete starts beating on the guy, Michael shouts at him, “that’s enough.” We don’t get to see the ride back to the station afterwards, but one can only imagine there’s a lot of silence in that car.

And this is where Michael’s opinion of Pete changes. Michael gets home and tells Karen everything. Only Karen doesn’t share his feelings, and is happy that Pete did what he needed to do to catch this guy. But Michael isn’t having it, and insists that Kaen not let Pete come around anymore. Only Karen doesn’t quite have a choice. Pete shows up the next day while Karen is swimming and talks to her about what happened, telling her a story about a time he was shot, because he hesitated. Then Pete shows up to the club Michael is involved with building the next night. It’s a soft opening party, and Pete arrives pretending to be doing security for Michael. In a huge confrontation scene at the bar, Michael is completely blunt with Pete and tells him to leave. It gets into cursing and yelling, and Michael lets Pete have it. All right in front of Karen.

This drives Pete into the arms of a prostitute. Only Pete is disgusted by her, right after he finishes having sex with her. He kicks her out of his car, despite being in the middle of nowhere. All of this is significant because it goes toward understanding Pete’s character. He wants that upscale life, and being rejected by Michael has driven him down to this. The next day, Pete goes to Karen’s school to talk to the kids about being a cop. And then he goes out with Karen to a bar, to get a drink. But after that, the fun stops. Pete takes it up a notch with Michael. Maybe getting that drink convinces Pete that he actually has a chance with this woman, and needs to start acting on it. He has Michael’s credit cards stopped, fakes parking tickets for Michael, and has a boot put on his car. It gets worse. Pete calls Michael’s investors to talk to them about how well they know Michael, making it seem like he is under investigation. And then when Michael tries to bribe Pete to go away, Pete goes all out. He has Michael framed for being a drug dealer.

This is where the movie goes off the rails. Not completely… it does get itself back together in time for the final act, but this going to prison situation is a little too far. For one thing, none of it is really explained. The cops bust in with a search warrant claiming that they got a tip on Michael from an informant, but considering this was a movie that was showing us every little thing up until now, how that all could have happened without us getting any knowledge of it seems unrealistic. By showing us every little thing, an example is that earlier on when they took Michael to dinner, the cops ran into a guy named Leon, who they had altercations with from time to time. Well, just this quick hello was meaningful, as Leon turns out to be important later, in what ends up happening to Roy. And even that sequence, where Pete and Roy go chasing after Leon, is carefully done, with Roy telling Pete to leave Leon alone, but Pete continuing to go after him. It turns out Pete has an agenda, and Leon is just a pawn in his game.

But seeing Michael go to prison is a little much. Especially because this movie has been all about the home, and keeping things low key and semi-realistic. Now becoming a movie about prison cells and court rooms, doesn’t quite fit or make sense. Luckily the movie doesn’t end here. It ends back in the home for the climax, and that’s pretty perfect. It began in the home with an intruder and it ends the same way. But not before some more interesting things can happen, especially when it comes to Karen’s friend, Penny. Let’s just say, this movie isn’t afraid to raise the stakes, but is also smart enough to bring things back to the house for the end. So it doesn’t raise the stakes on the situation, (at least, not after that whole jail-courthouse material is done,) but it does raise them in terms of character. Pete develops into a worse and worse person and Michael is pushed way beyond his limit. This leads to an exciting, yet simple climax. And that’s the point. There’s beauty in simplicity, and this movie knows it. This is not a great film, and to many it will seem pretty lousy. The truth is, it’s one of those movies that takes more than one viewing to really appreciate. Not that it’s incredibly deep or anything, but the more carefully you watch it, the more you realize the plans these character have, and ways that things develop and unfold. It’s pretty compelling, even if it does still feel like a B movie.

The beauty of the movie is how simple it is.

Also, a character study on the Ray Liotta character.