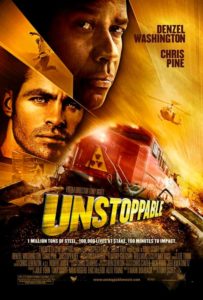 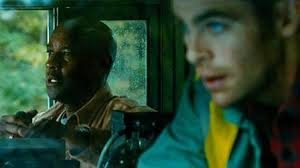 A pretty good movie put in the right hands as far as both actors and director. Tony Scott was a technical wiz as a director who just too often didn’t find the right projects to match with his abilities. Unstoppable is one of the times that the movie and director actually matched up. And it paired Scott with his long time collaborator Denzel Washington, as well as new kid on the block Chris Pine, (this movie came one year after Pine’s breakout in Star Trek.) But none of that matters is the story isn’t good, and this one has a pretty good one. It’s about a runaway train and two guys who are on a different train and decide to go after it. We get the story of these two guys, but we also get the story of everyone else who works for the train company trying to catch and stop the runaway. And watching all of the different techniques they try is a lot of fun. There isn’t anything electrifying about this movie… after all, it has a pretty simple premise and never really deviates from that. But as far as run away train movies go, and real life technology related disaster movies, this one is a winner.

Unstoppable is the kind of movie that tells what might seem like a basic, surface level story about a run away train needing to be stopped, but does it with such technical precision that it comes off like a thrill ride. This is something like Speed without the terrorist. But like that movie, it is all about the obstacles and figuring out ways to get around them. And another major different is that here, everything is believable. This is the best movie of director Tony Scott since Crimson Tide (back in the mid nineties.) And that’s saying something because Scott has pumped out a ton of movies in the time since then. But most don’t quite hit the mark right, whereas this movie knows exactly what it’s doing, exactly what it’s trying to do, and all the best ways to accomplish this.

The film stars Chris Pine as Will Colson, a conductor who is new to the field and is partnered up with veteran driver Frank Barnes (Denzel Washington.) Right off the bat that casting screams older guy and young rookie partnership, just like so many Denzel movies (Safe House, Two Guns, Training Day.) Only the relationship between these guys is actually more like the one between the characters in Seven than any of those other movies. In Seven, it was all about the older guy who was ready for retirement and the young, naive guy who was just starting out. And this movie makes sure to exploit that dynamic every chance it can get. That starts with the first time these characters meet each other, when Colson gets into something with one of Frank’s friends over the age difference between he and the rest of them.It’s not Frank, himself, who is giving Colson a hard time about his age, because Frank is a little too mature for that, but you can imagine it’s probably how he’s feeling, even if he’s not saying it. Especially when we find out later on exactly where Frank is in the timeline of his career.

The two men start out on their train, doing a routine drive, and everything seems fine. Colson is the conductor and Frank is just the driver. As far as Frank is concerned, it’s Colson’s train, and he is happy to take a back seat and let the rookie do all the work. Frank tells Colson he has just one rule, if Colson doesn’t know something, he should ask. They don’t want any screwups because Colson decided to go with a hunch about something, instead of just asking a question. And with that, the guys are off. Now, we all know there’s going to be a major problem involving a runaway train. But one thing pretty cool is that it’s not the train these guys are on. It’s not these guys who screw up or even get caught accidentally on board the train having the problem. It’s a whole other train and these guys are the heroes that spend the movie going after it.

That train is being run by two other recognizable character actors. These are Ethan Suplee from lots of nineties movies (Mallrats, American History X, Remember the Titans,) and TJ Miller, best known for the HBO show Silicon Valley. These two are the ones who let the train get away from them. Dewey (Suplee) realizes there’s something wrong with the track, while he’s starting out on the train, and so he leaves the cabin and gets off the train to try and fix it. While he is off the train, the gear shift switches to power, and the train takes off faster than Dewey can run. He and his partner, as well as another man who drives a pickup truck and works for the train company, named Ned, all try to stop it in different ways. None of them are successful.

To make matters worse, the closer they get to the train the more they realize how bad the situation is. First, it is traveling on the main train line, where the biggest and most important trains are. Secondly, they at first think the train is coasting, meaning it should be relatively easy to board, but then soon realize it is running under full power. Now they have a problem. Connie (Rosario Dawson,) is the one at the control center, in contact with all of these people, trying to figure out what to do. She has an expert by her side, Werner (Kevin Corrigan, another great character actor,) who just happened to be visiting the train yard that day, but unfortunately Werner doesn’t have much positive to offer her. Instead, he has knowledge of another problem. The train that is out of control is carrying tons of explosive molten phenol. If the train gets derailed in an area with people, there’s going to be a lot of disaster and death.

Connie gets in touch with the big boss, in charge of the train company, a man named Galvin (played by Kevin Dunn, another recognizable actor.) Galvin wants to stop the train by doing it in the easiest way possible, and doesn’t seem to realize that by trying these things he is losing opportunities to get the train while it is still in unpopulated areas. And so Galvin first attempt to have the train stopped is to put another train in front of it to slow it down. The idea here is that the train will slow down enough that a helicopter can fly above it and drop down an engineer, who can board the train and stop it. Connie doesn’t like this idea and tells Galvin that they need to derail the train, (put explosives on the track to knock the train off it,) while it is going through unpopulated areas, before it is too late. Galvin tries his idea anyway, and it goes completely wrong.

The movie becomes about two different areas of focus… the control center and all the different measures that they try using to stop the train is one focus. Then the two guys in their own train, and all of their ideas and plans, is another. And of course, these stories are so similar an so tied together that it really feels like it’s all part of one cohesive whole, which is a good thing. It tells us one story, but covers all areas of that story. And that often include diagrams and computer rendered models that are included in news reports to break down for us exactly what is happening and what is going to happen if things continue the way they are going.

And part of the fun of all of this is watching the many ways that they try to stop the train. First, it’s the putting a train in front of it, and dropping a guy out from a helicopter. That goes horribly wrong in a bunch of ways. Next, it’s having a firing squad shoot at the button on the side of the train which can stop it. This is the stupidest idea of all, considering that the button is located right next to another button which can blow the whole thing up. After that, there’s the derailment, which means explosives on the tracks. And all of these ideas are before we get to Colson and Barnes really being involved.

Once they join the pursuit, things get a little more intimate. Now, instead of giant vehicles crashing into each other or exploding, the action turns to what individual people can do. It is mainly Colson who gets to show off his action skills here, but Barnes does get on top of the train and attempt to jump from one car to another until he reaches the front. The way all of this goes down is first, the guys try their initial plan, which they’ve been preparing for during this whole ride to catch up with the runaway train. That plan involves them catching up to the train by going backwards, the wrong way down the track, and then using the back of their train to grab the back of the other train. The plan involves attaching their train to the other and then running it in the opposite direction of how it is going. Colson is the one who steps up to perform this task, and he gets caught in between the two trains, in a pretty wild moment.

That plan obviously doesn’t work. And so now it’s Barnes’ turn. And his try involves being on top of the train, jumping from one car to the next. He makes it pretty far too, until one of the jumps proves to be too far for him to handle. And so he has to turn back. And that leads us to the final attempt, which involves jumping from one vehicle to another, twice. It is incredibly exciting. The perfect end to a pretty thrilling movie. This movie is about as it could possibly be, considering the genre. But it’s a difficult genre and sandbox that it’s playing in where the action is all real and gritty and pumped full of technical terms. If there’s anyone who could have made this movie, it was Tony Scott. His visual style of having a camera that is always moving, even when the characters are just sitting around talking to each other, fits this movie just right. It would have been nice to get some better backstory for each of the characters. Colson in particular, gets the cheap end of the stick, with a relationship situation that is somewhat unclear, and not nearly as extreme as what we’ve come to expect. As far as the characters go, there is room for improvement. But as far the story goes, this one definitely packs a powerful punch.