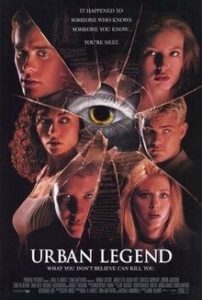 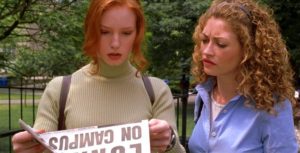 A pretty decent horror movie about stories and legends that have been told throughout time, there are fun scares in here, but there’s also plenty of campy cliches.

Surprisingly pretty good, this movie works because it has a killer with a plan. Long before Saw, there was this movie who killed with elaborate setups and murder scenes. Think Seven, only getting to watch the killer in action instead of just seeing the aftermath, crime scene each time. Here, the motif id urban legend, which means horror stories that have been passed down over the centuries. The film has lots of fun telling us these stories, and then acting them out as actual murders. The characters and dialogue here are pretty thin, but the story itself and way it captures mass hysteria on a college campus, is pretty cool.

Urban Legend is one of the better teen horror movies of the mid-nineties. It’s a movie that actually had a decent concept, unlike some of the other ones made at this time (such as Halloween H20 or I Know What You Did Last Summer.) The concept was that there was a killer who took famous urban legends about murders, basically short horror stories, and turned them into real life murders. Who knew there were that many urban legends out there? Unfortunately the movie also falls into way too many genre cliches, including taking parts from other movies that were made just a year or two before. So there are some parts Scream (the phone call and killer’s taunts,) some parts I Know What You Did, (the killer who is looking at the past of the characters,) and all parts campy fun.

The film start with the murder of a girl who leaves a gas station in a panic thinking the attendant is trying to attack her. Granted it’s a little weird that he called her into his office, saying the credit card company was on the phone, just to have her pick up the phone and realize nobody was there, before he said anything. The reason for him calling her inside was to warn her about something. Only he never got that chance. As soon as she answers the phone and realizes there’s nobody on the line, she freaks out and runs aways. And as she’s driving off in a rush, through a vicious rainstorm, you can hear the attendant (Brad Dourif, the man who voiced Chucky in the Child’s Play movies,) shouting, “there’s someone in the back seat.” That’s when an axe swings and crashes through the driver’s window, along with water and blood.

This was the first of the urban legends. The tale of the victim who doesn’t realize the killer is in the backseat of her car. The next one is the boyfriend who is hung from a tree while the girl is in a car below him. She hears tapping on the car roof. It’s the boyfriends feet scratching, (or in the case of the legend, his fingernails.) There’s also the one about the girl who doesn’t turn on a light at night, when she hears noises, and the next day wakes up to find a dead body in her room and a sign on the wall, written in blood, that says, “aren’t you glad you didn’t turn on the light?” Aside from these, there’s the tale of Bloody Mary, which for some reason is like a ritual at the university where this movie takes place. There’s a sort of shrine or wall dedicated to the legend and the girls stand in front of it, chanting “Bloody Mary,” for silly kicks.

Aside from those stories, there’s the one about the kid who mixed pop rocks and coke together, swallowed them at the same time, and died, the one about the killer calling from upstairs in a house, and one about a dorm room massacre that supposedly took place on the campus decades ago. In that one,  a deranged man knocked on every dorm room door, and slit the throat of anyone who answered. All of these legends come out during the course of the movie, but there are also plenty of deaths that don’t abide by any legend at all, and that kind of takes away from things a bit. Considering that the legends idea was the coolest thing about the movie, it would have been nice for them to keep it going for every single one of the deaths. And there are plenty of legends that don’t get mentioned at all, such as Cropsy, the escaped mental patient who lives in the woods.

But Urban Legend has its own story to tell,  about a girl named Natalie and her friends at the college. There’s a group of girls, (Natalie, Brenda, Sasha) and a group of guys, (Paul, Parker, Damon,) and they all hang out at a sort of coffee shop on campus, sitting on couches. If that’s not going for a “Friends” kind of thing (especially considering the three girls and three guys ratio,) then it sure looks like it. And this movie was made during that TV shows golden days. Natalie, (played by Alicia Witt,) is a soft-spoken, kind, innocent girl. Her friends, Brenda (Rebecca Gayheart,) and Sasha, (Tara Reid,) are the loud ones. Sasha even hosts a college radio show, with purely sexual content. The jokes she makes on this show are pretty stupid.

The same goes for most of the jokes throughout this movie. Damon, (Joshua Jackson,) for example, is always pulling pranks, from his Bloody Mary scare to his faking death after mixing Pop Rocks and Coke. And it gets to the point where you just don’t believe him, like the Boy Who Cried Wolf story. Aside from that, some of the jokes here include references to pop culture, real life situations, from the celebrity shoving a verbal somewhere (Scream already referenced that event,) to the Joshua Jackson turning off the song from Dawsons’ Creek, to the Rebecca Gayheart comment about the girl from the Noxema commercial, (which she is from.) These tongue in cheek jokes are okay, but they’re not as funny as the movie thinks they are. We are more interested in the story and the deaths than the humor here, and the longer the movie goes on, the dumber the deaths and story get.

For one thing, there’s a point in the second half where Natalie starts suspecting every character she comes across. Granted there are way too many jackets that are exact copies of the one the killer wears, just sitting around, (the professor has one hanging up in his closet, next to an axe, the janitor who picks Natalie up has one in his backseat,) but even still, Natalie suspects everyone. This even includes Paul, the character who has done nothing but support her throughout the film. He’s played by Jared Leto, (the only actor to come out of this movie in better shape then he went in.) Paul is a newspaper man, chasing done any scoop. He’s the guy who breaks the story about the massacre and also figures out that Natalie knows more then she is letting on, based on her past.

One thing that definitely works is the paranoia on campus kind of feel. Characters are on high alert, and we even learn that one night in particular is the twenty fifth anniversary of that campus dorm room massacre. But for every cool situation like that, there are some rip offs of other films that are just way too obvious. Scream probably gets hit the hardest, from the way that Natalie is quiet and innocent to the truth about her past, to the suspecting everyone and voicing her suspicions out loud, right to them, to the killer on the phone, to the party on the night of the anniversary where you better believe the killer is around and murdering some of the participants.

Another problem with the movie is that it makes characters seem evil or deserving of death too often, before having them actually get murdered. There are too many characters who are unconcerned about the killer and not doing the right thing here. The Dean makes every excuse you can think of, about the murders that take place at the start of the film. He blames Michele (the girl from the gas station opening,) on the attendant, he blames the girl killed in her bed on a suicide drug overdose, and he claims that Damon must be spending the weekend somewhere, living it up. Does he really even know Damon enough to say something like this? The Dean refuses to close anything down or call in extra security, and he even warns the local police to expect some prank callers who say there’s an emergency. Is it any question whether or not he will be killed? But other people die too, simply for not taking things seriously. And when you know the end of the movie and realize the killer was really targeting a certain character, and killed all of these other people who were innocent, instead of going after the actual target, it seems pretty ridiculous.

Urban Legend definitely has its flaws, but for the most part, it is a pretty fun movie. The film captures the college life pretty well in terms of making it almost like a small town on high alert. We get to know a professor, a security guard, and the Dean, as well as this whole group of kids. And while the characters might be very basic and simple, the actual killings are pretty cool. A good horror movie knows that each death is an opportunity to get artistic and creative. This movie certainly knows that. Not that every death is perfect, but there are quite a lot of fun ones, such as Sasha, at the radio station, in a booth with her back turned to a guy in another room, helping out with the show, as the killer comes up behind him. Sasha doesn’t hear a thing and when she turns around, the lights are off, and we’ve seen the killer in action behind her. Moments like that are pretty cool, and help cancel out some of the dopiness. There are cliches all over the place, like the sassy black cop who is watching Coffy and delivering one-liners, but if you can get passed those, this movie makes for an entertaining time.