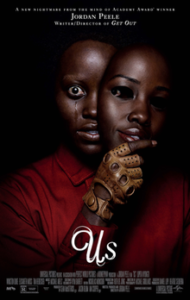 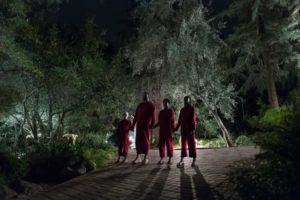 A horror – comedy that is just okay, for most of the way through, but has a final act and then an end twist that digs deep and puts everything that came before it in a new light.

The first half of this movie is just okay, but boy does it pick up after that. That first half is layered with clues about what is to come, and what is really going on under the surface, with these characters. But if we don’t realize that they are clues, (on a first viewing,) and it’s not such a big deal. As we go on, however, and the film goes deeper and deeper down the rabbit hole, this movie really picks up. It might seem like a home invasion thriller, but this is much more sci-fi and clones related than it is like The Strangers. It isn’t about this family, as much as it looks like it is. Instead, this movie is about a much bigger picture and understanding how it can all be happening and why. It doesn’t answer every question, but that’s because there’s no way it could have. What it does answer is just enough to make you want to see the movie again, and make you want to read about it, to figure out more. The theory about the son, Jason, is particularly interesting. For about half the film the experience is just okay, but then it slowly starts to get better until it builds up to an amazing twist ending. This ending is so good that it actually changes the entire perspective on the movie. Pretty powerful and creative stuff.

Us is the second film by writer / director Jordan Peele, following his masterpiece breakout movie, Get Out. This second film isn’t nearly as good as the first, but it is still smart and fun and filled with all sorts of mysterious theories and clues. The most fun experience to the movie is actually the aftermath of seeing it, and thinking about it, and hearing all the different ideas people have (it’s nice to live in an age of Youtube.) But the thing about the movie is, for the first half it’s just a conventional run of the mill horror movie. In the second half, things start to get a little more interesting. And then only in the final scenes do we get the reveals that bring this movie to another level.

What that really means is that for most of the movie, it’s just an okay film. At least on a first viewing. What’s so great is that the twist ending is powerful enough that it actually infiltrates and changes all the scenes that came before it, making this one of those movies like The Usual Suspects or The Sixth Sense, that you really need to see a second time, knowing the twist, to have a completely different experience. But on a first viewing, most of the movie is just okay. There’s a long standing question about whether or not a great ending can save an otherwise mediocre movie. Us is the movie that proves the answer is actually “Yes!”

At the start of the film, we are with a little girl on her living room couch in the eighties, watching a commercial on TV. The commercial is for Hands Across America, an eighties movement where people held hand across the entire continent for about fifteen minutes in an effort to raise money and awareness for homeless people. Something like that. It will be important later. So will the rabbits in cages that we see during the opening credits. For now, we cut away from the daytime watching television scene, and go with the little girl to a carnival on a boardwalk at night. This is the Santa Cruz boardwalk, and the little girl walks it with her parents, noticing things like the guy with a sign that says 11:11, a bible verse, but also a palindrome, like a reflection in a mirror. That time will repeat itself throughout the film, on clocks and other places.

The girl wanders into a funhouse on the beach (why on the beach, and not up there on the boardwalk with the rest of the attractions?) And once inside she walks through a hall of mirrors. She looks for the exit sign, and sees it, but then realizes it is just a reflection in the mirror and there are actually about a hundred exit signs being reflected, one in every mirror she sees. And then the girl comes to a mirror with another girl in it who looks just like her. You can tell that this is not a reflection, however, because the girl in the mirror is standing backwards. And then the movie brings us out of this scene, which was a flashback, and into present day.

We now meet the woman who was the little girl, Adelaide (Lupita Nyongo.) She is married to Gabe (Winston Duke, from Black Panther,) and has two kids, Zora and Jason. The family is driving to their beach house in Santa Cruz. This house is in the same community as the beach where Adelaide had that experience when she was younger. And the experience definitely took a toll on her, because we see more flashbacks later on that show that Adelaide could not talk afterwards. The doctors believed she had post traumatic stress disorder, and she just shut down completely. So whatever happened must have been extreme. With that in mind, why would Adelaide go back to this place with her family? When their friends invite them to the beach, the family gets ready and then drives there too. Now we’re talking about the exact same beach where Adelaide had the fun house experience. And they end up on the sand right nearby the funhouse.

To be fair, Adelaide does not want to go here, and even protests against Gabe’s desires with this one. But Gabe wins out and convinces her, and soon the family is heading to the beach. Once there, they see a dead older man being wheeled into an ambulance. Then they get to the boardwalk and beach where their friends, a white couple with two twin girls, are already there having drinks. These two, Josh and Kitty (Elizabeth Moss,) seem very superficial as they drown their problems away with booze and talk about all the great material things in their life. Gabe tries to brag about his new motorboat, and Josh easily shuts him down by one-upping him with things that he has.

When Jason leaves the group to find the restroom, the first real clue of something unusual (or first obvious one,) occurs. He sees a man in an orange jumpsuit standing on the beach with his arms stretched out like a T, and blood dripping from his hands. Jason doesn’t think too much of it, and returns to his family, where his mom is freaked when she thinks that Jason disappeared. The family goes home, and that’s where the first big event happens. They are attacked by a family of clones or twins that consists of doppelgänger versions of each one of them. At first, Gabe goes outside to confront the family, which is standing in the driveway with each member holding hands. He brings a baseball bat and tries to threaten them with both force and also with the idea that the police are on their way. The family doesn’t care. The woman claps her hands, and suddenly the four members that looked like still figures, come to life, and each approach the house from the different direction.

Gabe gets inside and locks the door, but it’s no good. His doppelgänger finds the spare key under a rock in the driveway and gets in. The doppelgänger takes the bat from Gabe and uses it on him. And now the family, including an injured Gabe, is forced to sit on the living room couch and watch as their orange-jumpsuit wearing counterparts come in and terrorize them. If you’re getting a Stranger-vibe here, you’re not alone. But the movie doesn’t stay in the house for the entire movie, to become a home invasion film, like that other movie did. Instead, it has the characters go out and take on their counterparts in different ways. Zora leads her double on a chase through the woods. Gabe fights his double on the motor boat. And Jason plays with his double in the closet, (certainly the strangest of the interactions, and part of the list of clues that have led to theories about Jason and who he really is.)

When the family shows up at the house of their friends Josh and Kitty, from earlier, things take on a new twist. This is where the real second half of the movie begins. Suddenly we see that there’s a whole lot more to this story than just this one family being terrorized by their clones. Without giving away what happens, let’s just say that the movie suddenly stops holding back on actually killing people, and turns to full on horror. There is comedy in these moments, (references to OJ Simpson, and The NWA Song, “F The Police,”) and also some pretty strange beats. And the scene leaves us wondering even more about how everything we see and have learned from this house is possible.

We get the answers. Kind of. In the final act, all is seemingly revealed. It is now the next day, (I love movies that all take place in one night, and then have a sort of epilogue that is the morning after, like Can’t Hardly Wait, or Judgement Night.) Adelaide goes. looking for her son, Jason, and where the road takes her leads to some pretty cool revelations. Especially the final one that comes in the last two minutes of the film and changes everything. This movie goes pretty far out there in the realm of sci-fi, and because of that, it’s not really possible to explain everything, (and if it was, it would just be boring and feel like way too much explaining, and a total momentum killer.) This movie explains just enough. It has one of the greatest twist endings out there, (yes, I would say this one is better than the Sixth Sense, and therefore is right in between the Usual Suspects and that movie, in terms of how great its end twist is.) And it sure does make you want to go back and see the movie again!