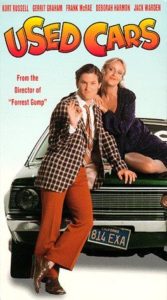 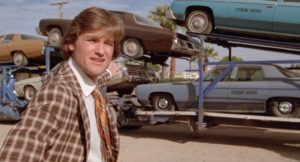 A pretty funny movie, this one is loaded with clever ideas, although it does feel dated and off color at times.

Used Cars is a movie that for the most part holds up pretty well. This was one of Robert Zemeckis’ first movies, long before he changed the industry with films like Back to the Future and Forest Gump. But you can see that Zemeckis is all about the clever tricks here, and that he obviously knew how to work an audience. What works about this movie, aside from the humor, is that it has a story which keeps evolving and brining in new twists. This movie isn’t about two competitors for selling cars, the way it might seem, but actually has characters that are out to kill each other, and really goes for the jugular at times.

The ideas that make this story feel like they are formulaic are that there are two brothers who both own used car lots, and whose lots are right across the street from each other. So they do compete, or have done so in the past, but the movie isn’t really about that. Instead, it’s about the future, and the future is that one of these brothers, Roy Fuchs, (Jack Warden,) has decided that now is the time to pull the final chord on his brother, Luke Fuchs, (also played by Jack Warden,) in order to acquire his car lot. Kurt Russell plays Rudy Russo, the protagonist of the movie, a salesman who works on Luke’s lot.

Roy wants to kill his brother because there is an expressway being built that is about to take over his land. So he will be left with nothing. There’s a lot that feels dated in this movie and doesn’t seem to make sense, and this is one of many such ideas. If the expressway needed the space that his lot was on, then they would have to pay him for the lot. In which case, he could just open up another lot someplace else. But that never comes up. Instead, he decided to have his brother killed.

Now, his brother Luke, has just agreed to front Rudy the amount of money he needs to run for office, which is something that Rudy has been dreaming about for a while. That helps establish the relationship between Rudy and Luke, and how much Rudy must love this guy. He’s basically like a mentor or a father figure. And so when Roy has his brother killed, and Rudy finds out about it, the war has begun. But just getting to this point is a lot of fun too. First, there’s the great gimmick where Rudy literally puts a ten dollar bill on a fishing line, reels it out across the street, into Roy Fuchs’ lot, and has a customer there follow the money (which he thinks is moving by the wind,) all the way to Luke’s lot. Nevermind that the customer would most certainly see the line attached at some point, but for the sake of the joke, it works.

And then there’s the extreme scene where Roy’s mechanic pretends to be a customer and takes a test driver over at Luke’s with Luke in the passenger seat himself. This mechanic knows that Luke has a bad heart, and so he crashes the car as much as possible with the two of them inside, hitting everything in sight as they speed down the road. By the end of the ride, the Mechanic runs away from the crashed car, and Luke is left to die. But not before he rips off the armband on the mechanic’s shirt as evidence of who killed him. All of this is a little too convenient and simple, but it’s still kind of fun.

What is great fun is the series of commercials that Rudy and his team make to promote their car lot after Luke passes away. The commercials are fantastic and probably the best thing about the movie. Especially the second one, about murdering high prices. In that commercial, whenever they see a car that is being listed at too high of a price, they take a shotgun and shoot the car up. These are cars on Roy Fuchs’ lot, of course, so they are destroying his property. But the commercial goes on from there to feature a guy called High Prices, dressed in a superhero-like villain costume. He shows up, standing on top of a car, and the cowboy doing the commercial takes the shotgun and blasts him as well. This is definitely the kind of commercial that gets the public’s attention.

That commercial is the funniest moment in the movie, but there were other acts of clever marketing and tricks as well. The first commercial these guys shot involved a girl standing next to a red car to help promote it, with a dress that got caught in the car. The salesman doing the commercial has a thing against red cars, (he thinks they’re bad luck and is terrified by them,) and so when the lights turn on and he sees that the car he’s promoting happens to be red, he freaks out. That’s when he starts cursing, and the people filming the commercial can’t believe the things he just said on live television. And yes, this is all live, because they have tapped into the feed of a pro football game and are cutting the game off to show their commercial. After the salesman starts freaking out about the red car, the woman’s skirt gets stuck and then flies off. Now she’s completely naked and screaming and the commercial goes on. This is the kind of thing they could never do now a days. It breaks all boundaries of decency, (nobody is getting the woman something to cover up with, but instead they just keep promoting the car lot,) and yet it is still pretty funny. This is the kind of thing that came from a simpler time. The time of movies like Kentucky Fried Movie that just didn’t care about being Politically Correct. The movie was made in 1980, but it sure feels like it’s out of the seventies with moments like these.

The characters who work on Luke’s lot decide that if they admit that Luke is dead, they will have to turn over the lot to Roy. And so they bury Luke in a car in the back of the lot one night, and tell everyone he took that car to Miami and will be back in a few days. Even this is outrageous and extreme based on today’s standards. We are obviously living in an uber-sensitive time, but the complaint would be that this is so disrespectful to a corpse. In the movie, however, it’s very funny, in a Weekend At Bernie’s kind of way, (especially during a scene where they prop the body up and have it drive the car out of the lot, colliding with a transformer that causes the car to explode.)

So now the guys are running the lot, trying to hold off from having to admit to Roy that his brother is dead. And that’s when Luke’s long lost daughter shows up, looking for her father. Now, in any other movie this would feel ridiculous, for her to show up right at that time. But here, it kind of works because the movie has been establishing it again and again, constantly telling us about this daughter Luke has, who he hasn’t seen in over a decade, and who just called him recently for the first time in ages. The second half of the movie becomes about her, as she takes over ownership of the lot, but has to deal with Roy Fuch’s who is pulling no punches in order to get ownership of that lot for himself.

The movie really works for about three quarters of the way through. The comericals and stunts these guys pull are great, (at one point they have a bunch of stripper come and do a show on top of the cars,  to lure costumers away from Roy’s lot, and get them to come across the street.) In the last quarter, however, when Roy finds himself no longer working for the lot, things start to get a little messy. Roy resorts to another stunt in order to sabotage Luke’s daughter, and it’s up to Rudy and his team to help save the day. How they do it is a little ridiculous, but it sure makes for a fun climax. This movie doesn’t always work, and plenty of the jokes fall flat, but it definitely has charm, and is pretty smart in the way that it keeps unfolding.