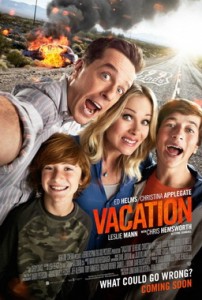 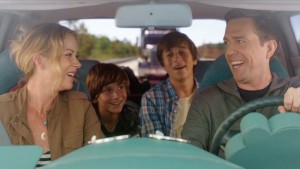 A movie that basically consists of one stupid gag after another, the films starts out fairly decent when it is with the characters at work or in the home, but once they hit the road, it’s all downhill in the worst of ways.

A very poor movie, this film is either copying jokes from other movies, or falling flat on its face, or both at the same time. The best scenes are the ones that take place before the family even leaves home, where we get to meet the characters or see them in their daily lives. Once the road trip begins, however, the movie just gets worse and worse. The characters are all pretty annoying and uninteresting, and the humor is more disgusting and unpleasant than it is funny. The road trip brings the character to one location after another, and each new spot really has only one attempt at a joke. If that joke fails, such as the hot springs that turns out to be a sewage dump, than the whole scene fails. Every so often there is a slight glimpse at the potential this movie might have had if it handled things differently, such as the mention of former life the wife once had when she was in college, but these moments are all handled the wrong way as if the filmmakers had no idea how to present its ideas in a humorous way. The result is a pretty bad and unfunny film.

Vacation is the attempt at making yet another sequel to the famous National Lampoon series from the eighties. There were four movies in the series. Two of them were classics, and the other two were duds. National Lampoon’s Vacation, the original film, was great. Then came the dopey European Vacation. That was followed by the excellent films Christmas Vacation, which for many, is the high mark of the series. That rounded out the eighties, taking us from 1983 to 1989. About a decade after that last film, the gang turned up one more time for Vegas Vacation, and it was another poor attempt. Now, roughly twenty years after that film, they have put out a movie that doesn’t even star the original actors, Chevy Chase and Beverly D’Angelo. This movie, titled simply Vacation, stars Ed Helms, playing a grown up Rusty, the character who was the son of the family.

Basically Vacation might as well be any other family movie, such as We’re The Millers. It has very few ties to the original film or series, and whatever attempts are made to link it to those films fail pretty hard. The movie is about the family trying to get to Wally World, the same place that the first film was all about. It throws in a character who is supposed to be Audrey, the daughter of the original family, and Rusty’s sister. Only there’s a problem. She’s played by Leslie Mann and looks nothing like the different actresses who played Audrey over the years. Audrey was a brunette. The closest she ever came to looking different was when Juliette Lewis played her with lighter hair in Christmas Vacation. Here, they just tack on Leslie Mann, just to act like the movie is bringing in Audrey. It feels forced and unfunny. Why not bring back Juliette Lewis for the role? That would have been a much smarter move.

The scenes that don’t deal with the family going on the road, or don’t try to connect this movie to the other films in the series, are actually the best ones in the film. Basically the first few scenes, before the road trip actually begins, are the few that actually work. There’s a funny scene on a plane, where Rusty is the pilot and leaves the cockpit with an elderly man who is not very capable, in charge. When the plane starts plummeting, Rusty accidentally finds himself groping a female passenger one time and tearing her shirt off another time. Between this action, and then the response of Colin Hanks, who plays her husband, it’s a pretty funny opening scene. So is the dinner table family meal scene that comes not too long after this, with the Griswalds inviting over a black family to dinner. The father of that family, Keegan Michael Key, of Key and Peele, has a nickname for his son and keeps calling the boy this. Rusty tries to show that he has the same kind of connection with his own son, and ends up stealing the nickname. When the other father calls him out on it, we get a pretty great moment.

You might notice, from those descriptions, that Colin Hanks was the funniest part of the first scene and Keegan Michael Key the funniest part of the dinner scene. The movie hopes we don’t figure it out, but what it’s trying to do is throw in name actors who turn up for only one scene each, and can elevate the film. Maybe if it spread these actors out a little more and got more of them, it might have actually worked. Instead, the movie quickly turns into a film about just the four family members and that’s where it starts falling flat. There’s Christina Applegate at the annoying and one-noted mom, an older son who is very efeminate and in touch with his feelings, and then a younger son who is kind of a badass, cursing up a storm, and giving it to his older brother every chance he can get. Each of these characters is very two dimensional.

For Applegate, this is more of the same kind of thing. The actress keeps making these R rated comedies that just aren’t funny at all. From The Sweetest Thing to Hall Pass to this film, she just can’t get a break, or keeps chooising the worst properties out there. This film actually has a lot in common with those other. Like The Sweetest Thing, the Cameron Diaz, three girls out to meet the guys movie, this film takes its characters on the road where the run into some of the most digusting things and people. It’s no coincidence that both movies feature a glory hole in a bathroom. This one also contains a filfthy bathtun and a ball of pubic hair which may or may not be composed of hair from multiple people. Is this stuff supposed to be funny? I certainly hope not.

Luckily there are some soft spots where the movie actually makes you half smile, but they are very rare. One of these is when Rusty’s older son, James, is trying to flirt with a girl at a motel jacuzzi. It’s just the two of them, sitting there, talking, and then Jame’s dad shows up. Rusty Griswold pretends to be a stranger who is going to compliment the boy and talk him up in order to make the girl like his son even more. Instead, Rusty ends up coming off like an old man pervert, talking about how sexy the boy is. It’s funny only because you can picture what the dad is thinking, hoping to help his son out by being a good wingman. Of course it completely backfires and the girl ends up asking James if she should call the cops before leaving the jacuzzi to go back to her room.

For every one of those moments, which is moderately funny, there are about ten moments that absolutely are not. When the family tries to take a shortcut to a hot springs area, they find themselves in a sewage dump. When they go to visit Audrey and her husband, (played by Chris Hemsworth,) Rusty takes a tractor out onto the field and ends up driving right through a cow. There’s even a scene where the crew goes to the college that Debbie (Applegate,) once went to. Apparently she had the nickname “Debbie Do Anything,” meaning she never said no to a dare. This could have been very funny, with different people bringing up to Rusty some of the different things that his wife used to do, in a Best In Show, Cookie used to have a reputation and be known around town, kind of way. Instead, the stories of what Debbie used to do are quickly forgotten in place of a stupid drinking, obstacle course challenge which ends up being way more disgusting than it is funny.

Moments like this, that have potential, are quickly squandered and mishandled until whatever momentum they had falls apart. Another one like that comes at the camping grounds, where the family stays on some ancient Native American land, surrounded by teepees. It is actually the area where four different states meet together. When the main characters get busted for something, law enforcement officials come out from each of the different states, and at first it’s pretty funny. Granted we’ve seen moments just like this before, where every second it’s someone new walking onto the screen, from the people showing up in the bathroom of There’s Something About Mary, when Ben Stiller got his zipper stuck, to the multiple cameos that always appear in the Anchorman movies, during the rumble scenes. Still, despite having seen it before, the moment where all these officials show up, one at a time, actually works in this film. But then, like just about everything else in the movie, it gets taken too far. These officials start pulling out weapons and making threats to each other and having a standoff. They get into a game of not being allowed to stand inside of the borders of each other’s state. It’s prety stupid, and clearly just meant to show off how cool a location they picked, where the four states intersect.

This movie copies other films in all kinds of ways. There was the glory hole moments from the Sweetest Thing, the multiple people showing up from There’s Something About Mary, and then still another reference to Mary, when Rusty and Debbie are on the ground about to have sex when suddenly police lights turn on and we see that there’s a bunch of people all around them ready to do the exact same thing. It’s almost exactly like the rest stop scene in Mary, that leads to Ben Stiller getting locked up. It’s pretty safe to say this movie has very few ideas of its own and is incredibly unfunny.

The film does address some serious or at least real moments, that are actually not played for humore, such as the older brother realizing that he doesn’t have to keep taking abuse from his younger brother, and fighting back. Moments like this don’t come often, but when they do, they are a nice relief from all the failed attempts at humor. The movie even forces the original Griswold parents Clarke and Ellen (Chase and D’Angelo) into the film, but they are given very little to do, and it’s just as unfunny as pretty much everything else in this picture. This is one of those movies that really didn’t need to be made. With so few original ideas and so little good humor, it turns out to be quite a mess, and clearly a movie that was thrown together just because it had name brand recognition. What a disaster.