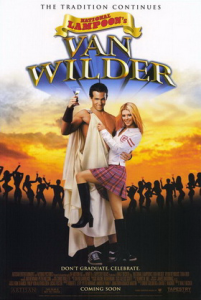 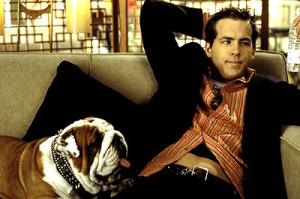 A pretty idiotic college comedy about a party guy who refuses to graduate and the hot girl who is writing an article about him.

A lousy college movie about a cool guy who has to win over a girl and steal her away from her jackass boyfriend. There are two other plot strands here, neither one of them any better than that. One involves how the girl is writing an article about the cool guy who the school paper. The other is about whether this cool guy will even make an attempt to graduate. Every one of these storylines has been done before. The same can be said about every character in the film. The most interesting part of this is the relationship between Van Wilder and Gwen (Ryan Reynolds and Tara Reid,) mainly because the two of them are the only likeable ones in the film.

National Lampoon’s Van Wilder is a pretty poor excuse for a college movie. This one hits every cliche in the book and is barely fun at all. It certainly isn’t very humorous, despite its numerous attempts at stupid jokes. The movie is the breakout film for Ryan Reynolds who was coming off his television show, Two Guys, A Girl, and a Pizza Place. He’s since launched a film career playing the same kind of wise-ass character over and over again that he plays here. In fact, he recently brought that routine to the superhero genre with the movie Deadpool and was rewarded with massive success (It took him three tries at the superhero genre before making Deadpool, with Blade 3, The Green Lantern, and played Deadpool in X-Men Origins: Wolverine.) So, now, with Deadpool, he has officially perfected this persona, but back when he was making Van Wilder, and just getting his start, Reynolds wasn’t quite up to the task.

That’s not to put the blame on the actor for this one. In fact, if anything, Reynolds, here, showed that he had potential. Tara Reid wasn’t half-bad either. It was the writing of this movie that was the real problem.The film is simply about a guy who is the big man on campus. He’s a party organizer that everyone comes to for help. Can’t get the girls? Van Wilder is your man. He’s the Hitch of college life. And a reporter is tasked with writing an article about him. She’s got a boyfriend who is a jackass and the movies villain. That’s pretty much the gist of this thing.

For college comedies, this one is a real letdown. The ideas are very narrow-minded and limited. From Old School to Animal House, there have been a handful of greats, but more often than not, we end up with something like The House Bunny or Dead Man on Campus or PCU, about saving a fraternity. Luckily this movie doesn’t go that route, but it does hit every cliche in the book, inlcuding an Indian assistant who has a terribly fake and thick Indian accent, and an evil fraternity that is out to put Van Wilder in his place.

The humor here is the big problem, and that’s because, among other things, it feels very repetitive. The same jokes keep popping up over and over again in different ways. It starts with Van Wilder not having any shame about nudity. Right at the start of the film, there’s a kid on the roof of a building about to jump off and commit suicide. Van Wilder approaches this kid with no pants or underwear on, throwing the kid for a loop about what’s going on. This one is actually kind of funny. But then we see it two more times. There’s the naked race that Van Wilder strips for, (and for some reason it is only guys running.) Then there’s the art class where he leaves Gwen and then goes to, taking off his robe and posing.

Another joke that is repeated one too many time has to do with deformities. First there is a dog with giant testicles. This joke is milked at least three times on its own, including one where Van Wilder takes a bath with the dog. Then there’s the kid with a unibrow who wants Van to help him throw a party and get the girls. Van does everything under the sun except tell this kid to shave his eyebrows a little. And finally, there’s a kid who is constantly sick, and at one point ends up having a giant growth coming out of the side of his neck. This stuff is not funny.

Continuing with the repetition, there is the use of edibles as a prank. It’s used twice here, both times in the second half of the film, as if there’s no other way to prank someone. First, Van Morrison and his buddies get dog semen and put it into conolies and then serve the conolies to the evil fraternity. Then Gwen gets vengeance on her boyfriend by serving him a protein shake pumped full of colon blow formula. The results of this scene are pretty disgusting.

With such low intelligence humor, one would hope that maybe the storyline was at least worthwhile. No such luck here. Sure, we enjoy watching the story of Van win over the girl, but other than that, this one is a deadbeat all the way through. Her boyfriend is such a jackass on so many levels that he reminds me of what Stifler’s character became by the time of American Pie 3, the wedding one with Jim getting married. He makes idiotic jokes and has a terrible laugh. He is also in no way cool. Why would Gwen go for this guy.

The usual cliche about fraternity guys is that they are meathead jocks, only every once in a while you get a sort of nerd fraternity. In PCU, it was run by David Spade. There was also one in Animal House. This movie wants to be like that in the way that the cool, low key, party guy is the good guy, and the stuck up, career-oriented dudes are the villains. Maybe Gwen likes her boyfriend, Richard, because he actually has a plan for life, and is determined to become a lawyer. Poor Van doesn’t have a clue about his future.

And that becomes another problem for the movie. The story of a guy stuck in school, enjoying every minute of it, and not wanting to graduate. The problem with this is that the ending all of a sudden becomes both inevitable and incredibly predictable. This movie doesn’t make it about a contest that Van has to pass, but instead, a trial. He has to go before a deciding board, (which somehow includes Richard on it,) and present his case for not being kicked out of the school. And for some reason the guy who hates Van the most votes in his favor. Sorry, but I’m just not buying it. This guy (the man who played the principal in The Breakfast Club,) has reasoning that this way Van will finally graduate and get out of there. But doesn’t this man want to harm Van as much as possible. His vote and reasoininf are completey unrealisitc.

Van Wilder is a movie that suffers from some lousy humor and a pretty awful plot. It goes for gross out humor whenever possible, not only including the edibles scenes and their results, (close ups on the guys mouths as they are eating the conolis,) but also a scene where Van has to sleep with an old woman to get ahead. Tara Reid, who is by no means a good actress, ends up being one of the best parts of the film, and that’s saying something about how poor this movie is. Reynolds is also pretty good given the weak material that he’s working with. But neither one of them has enough ability to save this sinking ship from itself.