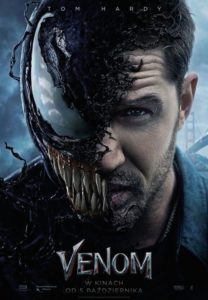 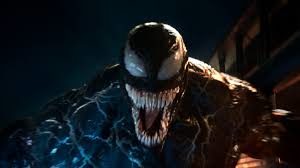 A fun B movie with a straight forward plot and some pretty cool action.

The movie works. Not as a super smart or deep film, but as an entertaining guilty pleasure kind of movie. If the modern day action movies are all superhero films (whereas they used to be Schwartzenegger and Stallone movies,) then this is the B movie version of those others. But it sure is a lot of fun. The story might be basic, but it does move in some creative directions from time to time. Most of the characters are weak, but the action and humor make up for it.

Surprise surprise, the new movie Venom turns out to actually be pretty enjoyable. Everyone counted this movie out, based on the trailers. That was the common consensus, anyway. The critics went medieval on it. None of that mattered. Now this is by no means a great movie, and certainly not much of a thinker film, but Venom is lively, creative, and entertaining. The action is exciting and the story moves. From time to time, there’s even some humor that works. Because of the poor reaction to the trailers, Marvel disassociated itself from the movie as much as possible, (Venom is made by Sony, not Marvel, and Marvel refuses to let Tom Holland’s Spider-Man of the MCU go anywhere near this thing.) Even still, audiences showed up and propelled this movie to some tremendous box office success. And they were right. Venom might not be great, but it sure is a lot of fun.

When this movie started coming together, fans of the comic book movie genre were hopeful. Especially when seeing the cast. Tom Hardy is one of the greatest working actors today. Just look at his movie Locke, which was basically a one man show. And Michele Williams is a tremendous actress. She carried Casey Affleck to a best actor Oscar win in Manchester By The Sea (his best scene in that movie is her pouring her heart out to him, and Affleck just reacting to her.) Finally, there’s Riz Ahmed, fresh off his powerful HBO miniseries, The Night Of. But if the cast side is great, then the director side is practically the polar opposite. Ruben Fleischer. This guys last good movie was quite a while ago, with Zombieland. Since then, he’s turned out crap like 30 Minutes or Less and Gangster Squad. So nothing about this movie was a safe bet.

With this mixed bag of talent thrown into the blender, the result of it all was that Hardy was entertaining, Michele Williams couldn’t do much for her limited part, and Rhiz Ahmed was totally miscast as the villain, Carlton Drake. This guy is supposed to be an eccentric scientist megalomaniac, a la Jeff Bridges’ Obadiah Stain from Iron Man and Corey Stoll’s Daren Cross from Ant Man. Only Rhiz Ahmed is best when he’s playing the quiet underdog type who is out of his element and uncomfortable. That’s what he did in both The Night of and also Nightcrawler, with Jake Gylenhaal.

So the villain doesn’t quite work here, but the story and action do. The story has a space-shuttle crash land on earth at the start of the film with four symbiotes on board. A symbiote is this movie’s (and also the comic’s) word for alien. And I love that in this movie, Tom Hardy’s character, Eddie Brock calls that out. When a scientist (played by Jenny Slate,) tries to explain to him the murderous experiments going on at the Life Foundation, (Carlton Drake’s company,) and calls the suits “symbiotes,” Brock says to her, “Symbiote? What’s that? So it’s an alien then?”

He’s pretty much on the nose. A symbiote is an alien suit or monster that kind of takes over the human it matches onto. There’s a symbiotic relationship between them. It’s sort of like a goo that covers the human and transforms him into this giant beast. And in the first scenes of the movie, we see one of the four symbiotes escape the crash site, in Malaysia and transfer from person to person (kind of like the spirit in Fallen.) To be fair, we only see one of these transfers in the beginning, from astronaught Jameson (the son of J. Jonah for a nice Spider Man Easter Egg,) to an EMT paramedic.

And right off the bat, it’s clear that the pace is a little fast. There’s no time for details, and instead, there’s a what you see is what you get kind of feel here. That’s why the passenger sits up rapidly and shoots goo out at the EMT, whereas most movies would probably lead up to that, showing the goo move around on the floor or bed first, to get the audience excited for what was about to happen. But this movie has no interest in wasting time, and quickly introduces us to Eddie Brock, and his news reporting show called The Brock Report. Eddie has a lawyer fiancé, Anne (Williams,) and her firm is working for Drake, the man who Brock is about to go interview. Before he does, however, Brock goes onto Anne’s email and reads some top secret documents.

He uses the information he learns from them the next day, during his interview with Drake. And he throws accusations at the tycoon. Drake responds by not only having Brock thrown out, but having Anne fired. There goes the engagement and relationship. Suddenly Brock is on his own, living in a lousy apartment building with a noisy neighbor. And that’s when Jenny Slate finds him, tells him about the experiments, and sneaks him in.

Brock gets into the lab rooms and is attacked by a woman who has the symbiote. He’s caught by the security and kicked out of the facility, but the symbiote is still very much inside of him and a deep, dark voice (Tom Hardy doing Venom,) starts letting him know it. The voice speaks to Eddie one word at a time, so that he can’t be sure of whether it’s real or whether he’s hearing things. But when The Life Foundations security team shows up to take the symbiote back from Eddie, all hell breaks loose. We are more than at the halfway point here, and Venom is just making his first appearance. And it works. The wait time works. The way that the first half is more setup and story and the second more action works. And just like that the real excitement has begun.

Certainly the humor first kicks into gear at this point, with the conversations between Eddie and the symbiote. And the action seems to keep coming. There’s a scene at Eddie’s apartment, then a scene where Eddie is chased through the streets by drones (the best scene in the movie,) and then of course the climactic boss battle with these things (yes, Drake gets a symbiote too, and they stupidly show us this in the trailer,) trying to tear the other one off their hosts. It’s all good fun. And the action is interspersed with scenes of Eddie trying to get help from Annie and the doctor she is dating.

The movie isnt great for a handful of reasons. The villain is dopey, the dialogue is basic, and the story isn’t exactly mind blowing. Brock is the only character of interest here. But what does work are the strange directions this movie chooses to go. Without giving spoilers away, let’s just say Anne gets to help in a way that no one ever saw coming. And Doctor Dan (her new boyfriend,) being such a help to the situation, is a nice move (we’re so used to seeing the new boyfriend be a jerk that when movies like this and Ant Man make him he a nice guy, it’s a welcome relief.) And when the symbiote tells Eddie the reason why the alien wants to stay on earth, it’s a blast. Sure the movie could have been a lot better (Iron Man and Batman Begins set the template for how to make an origin movie with a character learning his powers,) and Venom is never given the chance to play around with what he can do. Still, the movie deserves credit for taking chances, featuring some pretty wild action, and throwing enough humor in there to keep us smiling. It might not be a great film, but it sure is a lot of fun.