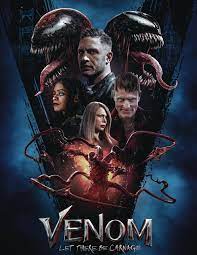 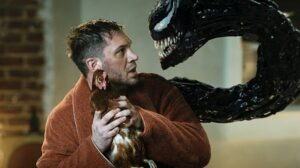 Not nearly as good as the first Venom, this one tries for all comedy all the time, and most of it doesn’t work.

This movie is an extreme mess. First, it tries to do the same story as the first film, including Venom and Eddie Brock starting together, then separating from each other, only to come back together again (basically the same premise that a romantic comedy tends to follow.) Aside from copying the same story beats, this movie isn’t funny like the first movie was, since Venom and Eddie are already used to each other now and have nothing new to offer. But it sure keeps trying. The movie constantly goes for humor, and since it is not very funny, it is more annoying than anything else. But the worst thing about this movie is how much it gets Carnage wrong. This movie does a disservice to the iconic villain in every way possible, starting with it’s casting and appearance. Even the action here is lousy. What a disaster.

Venom: Let There Be Carnage is a pretty lousy superhero movie. In fact, it’s the worst superhero movie in a long long time. This one pretty much makes every mistake it possibly could have. The action uses so much CGI that nothing looks believable at all.  On top of all that, the movie tries to go for humor all the time, and for the most part it really isn’t all that funny.

Let’s take a step back for a moment and talk about the first Venom movie. It wasn’t a great movie, but it was fun. Considering the cast involved, it probably should have been much better. Tom Hardy is an incredibly talented and unique actor. His movie Locke, in which he is the only actor on screen for the entire film, showcases that. Michele Williams is also terrific. The first movie featured a third strong actor in Riz Ahmed. But what made that movie wasn’t the acting. It was the humor and the action. It was seeing Venom done right for the first time, as a big, bulky character that loves eating people.

Now in the sequel, they basically try to do the same thing. Only. this time it doesn’t work because it’s all been done before and resolved already. In the first movie, Eddie Brock was just getting his powers and figuring things out. He had no idea who this Venom creature inside of him was, and had to deal with that. In this second movie, Brock and Venom have been together now for some time. So the surprise element from Brock is gone. That means a lot of the humor is also gone. Venom and Brock quarrel in the sequel, to be sure,  but it just isn’t all that interesting or creative.

Neither is the villain. Carnage. He’s a fantastic comic book villain. One of the best, actually. A demented and tormented serial killer who cannot be reasoned with in any way. Cletis Kassidy, the man who becomes Carnage, is all kind of disturbed. Only here, played by Woody Harrelson, he’s treated as a somewhat sympathetic character. They give him a love interest and a back story that explains how he got to be so hardened and miserable. We learn about being abused as a child, which is fine. But as the Joker taught us in The Dark Knight, the less you know about a villain’s back story, the better and more scary they are.

And Kassidy is supposed to be scary. He’s supposed to be vicious and insane. But he doesn’t come off that way here. What they do with Carnage is all wrong. And that goes all the way back to the actor playing him. Woody Harrelson is a super talented actor, but Kassidy is supposed to be a young man. Carnage is a young version of Venom. In fact, to a certain extent he’s Venom’s son or offspring. But by casting Harrelson, who is way older than Tom Hardy, all of that goes out the window. The look of Cassidy is wrong, the voice of Cassidy is wrong (it should be a high, shrill voice,) and the look of Carnage is also wrong.

Carnage is supposed to look like his own unique, bright red character. Here, he just looks like another version of Venom. He’s supposed to be skinny and short. And he’s supposed to have hands that turn into things like axes. This movie gets none of that right. The closest it gets is to have spikey tendrils that pop out of his costume from time to time. But more important than his look is the fact that he’s not really scary here. It would have helped if this movie were rated R, and he could have done all sorts of horrific things to people, but even in a PG-13 version, they could have done it right. Look at Heath Ledger’s Joker in that PG-13 movie. The difference is that that movie relied on practicality and believability whereas this one just throws CGI at everything.

So now let’s talk about the story and the humor. The story here is paint-by-the-numbers thing. Eddie goes to prison to interview Cletis, and Cleetis reveals the location of lots of bodies. Eddie publishes the story, and Cletis gets the death penalty. Only Eddie goes to visit Cletis one last time, and this time Cletis bites his hand. The way this happens is, Cletis provokes Eddie, and with Eddie or Venom, inside of Eddie, lashes out. So now, some of the symbiote Venom suit gets into Cletis’ mouth, and when the exectution begins, Carnages pushes the injections out of Cletis. Then Cletis attacks everyone there and escapes.

Cletis has a girlfriend with a super power of her own. Shriek, played by Naomi Harris, can scream in such a way that it causes massive damage all around her. Now that’s a problem for both Venom and Carngage, whose symbiote bodies jump off their hosts and feel pain in response to high sounds. This conundrum, that Cletis loves Shriek, but Carnage hates her because of the sound she makes, is one of the only good ideas in the movie. The other one happens to come at the very end, so won’t be spoiled here, but it involves how Venom actually wins. And then there’s the post credits scene, which is by far the best scene in the entire movie. In fact, it’s one of the best post credits scenes of all time, considering what it means. There’s this and the appearance of Thanos at the end of the first Avengers movie as the two post credits scenes with the biggest surprise implications.

But a post credits scene should not be the best scene in a movie. And that’s exactly the problem here. What we do get in this film is not very good. The story follows the same format as the first film. That means Eddie and Venom start off together, then somewhere in the middle separate, then Venom joins onto Michele Williams, and she comes and helps Eddie by transferring Venom back to Eddie. Only in this first movie, all of this was pretty cool and memorable, with a kiss out in the middle of the woods, whereas in this sequel it’s just a repeat of what they already did, and feels instantly forgettable. It’s just one of many, many things wrong about this movie.

Woody Harrelson is all wrong. What they do with Carnage is all wrong. As far as that goes, it seems to always take more then one try to get these character exactly right. With Spider Man, it took three tries (first Tobey Maguire, then Andrew Garfield, and only with Marvel’s take… using Tom Holland, did they finally get it right.) With Venom, it took two tries. First was Topher Grace in Spider Man 3, and boy was that a blunder. But they used that to figure out what not to do, and make Tom Hardy’s Venom just right. Maybe it will be the same thing for Carnage. This try at the character (the first try,) was a disaster, but maybe one day they will try again and get it right, learning from the mistakes of this film. That’s certainly the hope. The movie did extremely well, and there will most likely be another Venom movie. Let’s hope it’s a lot better than this one.