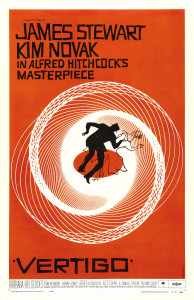 A masterpiece of mystery, storytelling, and wild twists.

A fantastic psychological thriller, this movie is a mystery with an intriguing mission and question at its core. A former detective is hired to follow a woman. Her husband thinks that she believes she is possessed and wants to know where she goes each day and what she does, before getting her help. Where she ends up taking the detective, as he follows after her, leads to more intrigue and death. On top of that, you’ve got this detective who is a very broken man, afraid of heights to the point where it has cost others their lives. Add in Bernard Herman’s haunting musical score and an obsession by the detective that he just won’t let go, no matter how far down the crazy path it takes him. This film has so much going for it, including some really clever and fascinating twists.

Vertigo is one of Alfered Hitchcock’s masterpieces. If you were to ask a random person on the street about Hitchcock’s best films, the list could contain any number of movies, such as The Birds. To me, however, the list is really composed of four essentials. Vertigo, Psycho, North By Northwest, and Rear Window. In those four movies, you’ve really got everything from a black and white serial killer film to a mistaken identity spy adventure, to an experimental film where the hero never leaves his living room and the wheelchair that he’s stuck in. Vertigo is the movie that goes the most deep with psychology and obsession. It’s also, perhaps, got the most twisted mystery of them all, at its core.

The movie contains what is one of the coolest stories that Hitch has ever told. Of course, you have to know the twist to really appreciate it. But once you do, and you know what was taking place behind the scenes, all along, the entire film takes on a new light. The story is about a retired police detective who is hired for a strange case. Scottie Ferguson (Jimmy Stewart,) is dealing with some major fear of heights issues at the start of the film. He has retired from the police force after a rooftop chase where he got so dizzy while hanging from the side of the building that he became unable to grab the mans hand who was trying to help him. That man ended up falling to his death. At that start of the movie, we learn all about that from a conversation Scottie has with his friend, Midge. We see the chase and death scene for ourselves, as the very opening to the film, but then hearing the characters discuss it in the next scene explains the context.

Scottie also tells Midge that an old friend from college has just phoned him wanting to take a meeting about something. This man is Gavin Elster, and Scottie sits down with him to catch up and discuss something that is on Gavin’s mind. It’s his wife. Madeline Elster has been acting very strange of late. She will be sitting there, with her husband, and then go into a sort of trance where she seems like an entirely different person. Gavin knows he needs to get his wife help, but wants to have a few more of the details filled in before he does. He wants to know what he is dealing with. And so he hires Scottie to follow her around and take notes.

Scottie begins to do just that. He sees Madeline go to a museum and sit down, staring at a painting known as “Portrait of Carlotta,” she also visits the grave of a woman who has this name, and stands over the gravestone staring at it for a while. Madeline’s hair contains the same bun as the woman in the portrait, and she gets the same kind of flower bouqet that the woman is holding in the painting as well. Scottie confronts Gaving with the news of these events and Gavin tells him that Carlotta was Madeline’s great grandmother, who she never knew. Carlotta tragically killed herself. And Madeline knows nothing of this, since her mother kept it all a secret from her.

Scottie continues to follow Madeline, staying hidden in the shadows. He follows her into a hotel where she has rented a room. He also follows her to Golden Gate Park, right under the bridge, where Madeline either falls or jumps into the water. Scottie sees that she is passed out in the bay and he jumps in after her. He then takes her to his room and gives her some fresh clothes to change into. The two of them start up a relationship, with conversations about how she doesn’t know who she is sometimes. They take trips together, like one to the Sequoias of the Redwood Forest, and continue discussing this.

Finally one day, Madeline drives to an old Spanish Church and climbs the stairs to the bell tower. Scottie can’t make it to the top, after her, because of his case of vertigo. He nearly gets there when he hears a scream and sees a woman falling past the window on her way to her death. Scottie looks out the window to see that it is Madeline. She has committed suicided just like Carlotta did. Scottie now testifies in a trial, where the judge spends a good deal of time berating Scottie for not being able to stop her. The judge talks about how Scottie now has to live with two people dying because of him, calling attention to the police officer who tried to help him during the rooftop chase at the start of the film.

After the trial, Scottie becomes institutionalized and is catatonic. Midge comes to visit him and Scottie can’t say a word. Cut to a scene later, and he is back on his feet, still obsessed with a dead woman, walking the street of San Francisco. He stops a woman who is driving Madeline’s car before realizing that Gavin sold it to her before he left town. Gavin told Scottie after the trial that he had to get away, after all that had happened, and so he was moving elsewhere. This leaves Scottie uncertain of what to do with himself. He is obsessed with a dead woman, and it drives him to notice another woman who looks kind of similar to Madeline.

Scotty approaches this other woman, Judy, and asks her a number of questions. He ends by asking her out to dinner. When he leaves the room, we see the truth about Judy. At this point, the audience is being told more than the protagonist knows. That’s some dangerous ground to be on. You don’t want your audience getting too far ahead of the main character, because, among other reasons, you are revealing the big twist with a good deal fo the film still to go. In this case, however, it works, and the reason why it becomes necessary is because Scottie is about to go on a rampage whereby he continues to physically try to change Judy so that she looks like Madeline, and for seem reason Judy keeps going along with it. Any other woman would walk out on Scottie right then and there, but Madeline doesn’t. And knowing the twist about her increases the believability of why she would stay. We now know that she has feelings for Scottie and isn’t just some regular woman being pushed around into changing her appearance by a psycho.

And yet, despite knowing the twist and not only seeing what really happened, but also hearing Judy explain it in a letter she is writing, we still have questions. It isn’t until the end of the movie, when Scottie starts making sense of things himself, that we get to hear a real explanation and make sense of it all. And it is one hell of an explanation. The final moment of the movie is disturbing and also unnecessary, but this is anything but the usual film, and so an unexpected ending fits right into place. Another strange situation is that the villain of the film, who is responsible for the whole mess, is never pursued. Instead, this movie isn’t about that man or the Madeline case. It’s about Scottie and how he lets an obsession turn him into a basket case.

Vertigo is one of the darkest psychological movies around and there’s one name that deserves a lot of credit for that. It’s not Hitchcock or Jimmy Stewart, but Bernard Herman. This man is the composer for the movie, (as well as others, such as Pschycho,) and his score here is absolutely haunting. It’s the reason why Hitchcock is able to give us some lenghty and even slow scenes of one character following another. The music keeps it all running smoothly, holding us on the edges of our seats with tension. There are definitely some questionable story elements here such as the fact that Scottie is having an affair with the wife of the man who hired him, and also how many other possibilties there are to the Madeline – Carlotta case, besides that she believes she is this woman reincarnated. For example, the two men sitting around discussing this never ponder that maybe Madeline found out about Carlotta from someone besides her mother. Instead, they react as though if her mother didn’t tell her, then it must mean she doesn’t know. So there are definitely some flaws, but the overall story and twists are fantastic and the movie really captures the tone and keeps you in suspense.