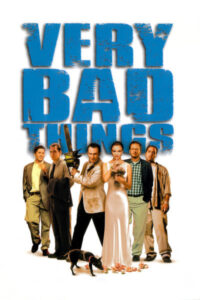 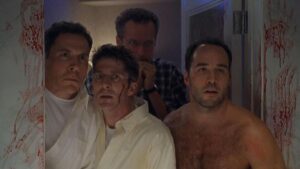 The ultimate bachelor party gone wrong movie, this one is a dark black comedy all the way. Very extreme and grotesque, yet still a whole lot of fun.

Very Bad Things is one of the darkest black comedies imaginable. It’s a movie about a group of guys who go out to Vegas for a bachelor party, get involved in murder and have to deal with the repercussions.  As far as those go, let’s just say things keep getting worse and worse. Their group of friends continues to get smaller by the moment as more and more “accidental” deaths / murders take place. Only this isn’t like a serial killer amongst us movie. There’s no mystery here, and that’s part of the charm. Everything about this movie is upfront and in your face, and call it like it is, without holding anything back.

At the start of the movie, we meet Kyle (Jon Favreau,)and his fiance, Laura, as they go to a bank, trying to finalize all checks and arrangements for their wedding. This wedding is coming up in about a week, and Laura is freaking out over every small detail. She’s a perfectionist, as we learn from her diorama model of the seating arrangements for the wedding. And is Kyle who is mister calm and collected, reasoning with her and helping Laura realize that everything will be okay. Kyle is on the verge of heading out to his bachelor party, but not before Laura gets a few last jabs in (‘I bet you didn’t forget the check for your strippers,”) and asks Kyle to take care of some things before he leaves town.

And then it’s the boys all showing up at the house of Adam, (Daniel Stern,) the guy who will be driving them, getting ready to go. Adam’s wife, Lois (Jeanne Tripplehorn,) is out there to see them off, with her two kids, and Laura. It’s a fun moments as the guys pose for pictures, kind of like teenagers would while standing outside of their limo before a senior prom. And then they’re off. It’s Kyle and Moore, (Leland Orser,) his longtime quiet friend, plus Michael (Adam’s brother, played by Jeremy Piven,) and Boyd (Christian Slater.) And right off the bat, there’s a whole lot of yelling and insult throwing in the car, during their ride to Vegas. There’s Kyle needing ton use Adam’s car phone (a joke that definitely feels dated,) and Adam giving him a hard time about it, while Boyd and others start insulting Adam for how cheap he’s being. So far, the movie is pretty good. It’s got some fun scenes that you don’t always get to see in these kinds of movies… the posing for pictures before leaving and then the car ride out.

But then the detailed moments stop. We don’t see the guys get to Vegas or check in to a room (The Hangover still takes the cake with that scene, and Allen asking if it’s the real Caesar’s Palace.) We don’t see them enter their suite and figure out who is taking each bedroom or how many beds and bedrooms there even are. These kind of details could have been handled quickly, and while they aren’t necessarily important to the story, they do help ground the characters in some kind of reality. Instead, this movie rushes right to the stripper. There’s a quick moment of watching the guys all in different rooms, and then the stripper arrives.

During that guys-in-different-rooms part, Boyd and Michael are doing cocaine, Moore is watching wrestling and jumping around on couches like a little kid, and Kyle and Adam (the mature ones,) are having a conversation in another room about having kids. This moment is interesting, because it establishes relationships, (such as that Moore is a weirdo loner,) but all of this does raise the question of why the guys aren’t going out at all. The stripper idea makes sense, of course, but they go to Vegas just to stay in the hotel room and not go anywhere? Not even dinner? Again, this is where The Hangover has this movie beat, with the guys in that movie all getting dressed up to go out, then going to the roof for a toast, before heading out on an adventurous night.

Things get really interesting though during the stripper scene. Especially with how it ends. With her dead. Michael kills her by accident. And while the guys are standing around trying to figure out what to do about the situation, a security guard for the hotel knocks on the door of their room and comes in. He notes the damage to the room and seems to be okay with a little payoff until he catches a glimpse of the dead stripper in the bathroom. That’s when he starts freaking out and Boyd stabs him with a corkscrew over and over again. The guys lock the security guard in the bathroom, holding the door shut as they wait for him to die. This is one of those dark as hell funny moments, as we see these guys all panicked, holding the door with all of their strength. Clearly these are not cool guys, and that’s a big part of the fun with this movie.

When they go out to the dessert to bury the bodies, we end up getting one of the funniest scenes in the movie. You see, the guys have cut the bodies up into many different pieces and stuffed them into suitcases and other kinds of luggage. And Adam has this idea that in order for the souls of these people to go to heaven, they need to be buried in such a way that all of their limbs are connected, or at least placed in the right spots, next to each other. And he is not up for negotiating about this. So the guy now have to go through all of the suitcases and all of the body parts to determine which part goes where and basically reassemble these two corpses. This is definitely one of, if not the, funniest scene in the movie. It’s so ridiculous on so many levels, and the craziest part is that the guys actually do it.

And now they are all headed home with the horrible secret of what they have done. Only what happens in Vegas doesn’t exactly stay in Vegas here. Adam can’t live with the consequences of what he was involved in. And so he starts freaking out, everywhere he goes. That includes a gas station mini-mart where he goes in to get some candy for his kids and ends up knocking everything over in sight. It also includes the rehearsal dinner, where Adam has a complete meltdown, leading to the whole group of best men having to go outside and talk over their problem. And them talking it over doesn’t exactly help. It leads to Michael and Adam getting even angry with each other to the point where Michael gets in his car and tries to ram it into Adam’s mini-van. And he does. Only not before Adam gets in front of the van first.

This is the first of the many bodies that are to fall. In fact, from this point on it becomes a game of musical chairs with one chair being pulled out of the circle at a time, in terms of our characters. And Boyd is the ring leader behind it all, not trusting anyone and being incredibly paranoid about who might know something, and who he should be afraid of possibly speaking. The second half of this movie is where things really get crazy. The burying the bodies in the desert was perhaps the mid point of the film, and things were definitely at a wild level at that point, but then when the bodies start to drop one after another in the second half, it’s like we are watching the second half of Wild Things, (a movie made the exact same year as this one, ironically.)

Very Bad Things is a fun movie. It’s not the smartest movie or the most creative, but the things that happen are extreme and take things to levels that most movies (especially that were made at the time when this one was made,) just wouldn’t ever dare to go. But aside from a violent murderous film, this one works as a comedy too. It generally tends to be more uncomfortable funny than laugh out loud funny, but it works. The characters and their relationships work. And every part here has been cast nicely to the point where we really believe these people and what they are dealing with. This was director Peter Berg’s first outing as a filmmaker and he definitely was swinging for the fences with this one, not going the usual conventional and safe route at all. It’s an entertaining movie to say the very least.