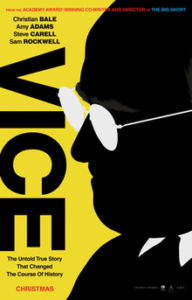 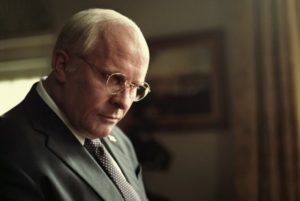 A way more complicated movie than it needed to be, this one feels the need to teach us and explain everything, as if it is a documentary and forgets that it should be really trying to entertain us instead.

You would have thought that director Adam McKay would get this one right. On his political and societal commentary kick, this is his middle film. His first was the Big Short, about the housing bubble. He can be excused for that one being as complex as it is, considering the subject matter. And his next film will most likely be about global warming. But with this one, it’s the story of a man, not an institution or organization. With that in mind, there’s no excuse for the movie to have turned out this complex and uninteresting. McKay tells the film as if it’s a documentary and tries to explain to us how every little system and position works. The movie would have been far better if we could have seen these things for ourselves. The other big problem is that only about half of the film takes place during the Bush administration, which is the thing that we actually care about. And even then, it’s not great. It rushes over most important events, and really only gives us one crucial and memorable scene, involving Colin Powell. Other than that, this movie is a bit of a mess. The performances are great, especially by Christian Bale, but the storytelling is not.

Vice is a political comedy of sorts that really isn’t very funny or interesting. It’s made by the great comedic director Adam McKay (Anchorman, Step Brothers,) who recently has been on a political and societal commentary kick. McKay’s last movie was The Big Short. It was about the housing bubble and financial crisis of 2008. It was also his first semi-serious film. Vice is his follow up, and next up, he will most likely be capping his political commentary trilogy with a film about global warming. The subject matters of these movies are definitely ripe for commentary, but it’s all about how the movie is told, and McKay doesn’t seem to know the right approach to telling them. Sure, his movies get nominated for oscars, which is generally a very good thing, but the truth is, with two for two of them, they are a little too slow and definitely too complicated to be entertaining.

For McKay, the reason to make these kinds of movies is simple. He recognizes that what we have going on in our society and country now, (over the last ten years or so,) is ridiculous. It’s so bonkers, that it is actually kind of funny. Especially to think how we could have possibly let these things happen. And so his movies are about that. They are based on truth, but definitely include artistic license as well, in the form of such things as some fictional characters thrown in. The problem is, his movies are a little too informative and complicated for their own good. They seem to be more about teaching than about entertaining, and they end up coming off kind of preachy.

Both Vice and The Big Short act as if they are documentaries. They clearly are not, yet they take on a form as if they are playing by the same set of rules that documentaries use, including such things as voice over, freeze frame, out of order storytelling, and lots of stopping to explain things to the audience. Both movies strive to explain to the audience exactly how things work or worked at the time. And you would think that this would be a good thing. But the problem is, if you need to freeze the screen to explain exactly what something means or how it works, then maybe it’s a little too complicated to begin with. And if you have to do this repeatedly throughout the film, then maybe you’re not considering all your options. Maybe there are easier ways to present it. You know the line “show don’t tell?” Well, these movies tell when they should be showing.

With McKay’s first movie, the Big Short, it was an understandably complicated subject matter. It would have been nice to see him find a Lehman’s terms kind of way of presenting it to the audience, but the fact that he didn’t just speaks to how tough the material was to understand. With Vice, however, there is no excuse. This is a story about a person, not a system. It should have been a narrative. Instead, just like the Big Short, the movie is all over the place. McKay probably feels like he is using all the tools available to him to tell this story in whatever way he can think of, but the truth is that by using son many different techniques, things just seem more chaotic and hard to follow.

The movie tells the story of Dick Cheney, the Vice President during the George W Bush presidency. We’ve now has two movies about this presidency, Oliver Stone’s film, W, and this one. Neither one was very good. And both we more about a single person than a situation. W was obviously about George W. It told the story of him in college, in politics, and eventually as president. Similarly, Vice tells the story of Cheney throughout his life, as if we really care what things were like for him when he was a line man working for the electric company, fixing power lines. Both movies seem to miss the point, which is that the story we are interested in is the time they in office, specifically as part of the Bush administration. We need to see more about things like September 11th, and how they handled it. Instead, we are given very little about the actual events that took place during this presidency, and that’s pretty ridiculous.

The interesting parts of the story are, of course, what happens during the Bush year. The idea here is that  Cheney, was able to pull the wool over the countries eyes for so long, and get away with it. Not only was Cheney the one who was really running the show during the Bush administration, but he also somehow got the country to go to war just to benefit his own financial interests. Halliburton was the company that made the weapons, and Cheney was the CEO of Halliburton. On top of that, Bush had it in for Sadam Husain, ever since Husain was the enemy of his dad, President George Bush, during the early nineties was in Iraq. This war would hit home on a personal level for Bush and a financial level for Cheney. And McKay is right, there is some funny in that. But the problem is that only a small portion of the film is actually about that.

Instead, the first half of the film is about Cheney rising to power. He works for multiple other administrations, starting with Nixon. And he’s not the biggest fan of Nixon, which means when Nixon resigns, Cheney stays on as one of the few people who worked there, and knows the system, but didn’t support this guy who is now gone. The first half of the movie is by far the more boring half, since we don’t really care about Cheney the man or what his life was like before Bush. The only thing funny is when Cheney sees Bush at a party once, and Bush is drunk and embarrassing himself, knocking things over. He’s the black sheep of the family, where his father is the president of the United States.

The only thing interesting in the first half of the movie is Cheney’s wife, Lynne, (played by Amy Adams,) as the tough woman who puts up with the nonsense from this guy. Lynne is the one who the movie credits with getting Cheney’s life back on track. When the movie starts, he has dropped out of college and is getting DUIs while working as a lineman. Lynne gives him an ultimatum. He can either get his act together and start becoming an active part of society, or she is going to leave him and find somebody else. This all happens early on in the movie. From there, Cheney goes to work for Nixon, along with his longtime colleague, Donald Rumsfeld, (Steve Carrell.)

In the second half of the movie, things do pick up a little. McKay starts to employ his techniques a little more, such as freezing the movie when Cheney retires, before joining the Bush administration, and having the credits roll, only to tell us, if only the story ended there the history of the country would be very different. But even with this, the Bush administration story doesn’t go into as much detail as it should. There’s only one really memorable scene, where Bush meets with his closest advisors in the Oval Office, and Cheney gets Bush to order Colin Powell to tell the American public about the weapons of mass destruction in Iraq (which was a blatant lie, and something Powell wasn’t happy about having to do.)

The one thing very good about this movie is the performances. Christian Bale in particular, is a genius when it comes to capturing a character. He puts on and loses weight like it’s a piece of cake, and this really helps him embody the different characters he plays, from the Fighter, where he was practically unrecognizably skinny, to the Machinist, to this film, where he is suddenly very heavy. Apparently it took five house of makeup a day for Bale to be ready, but it paid off. And Amy Adams is pretty good too. Unfortunately, the wonderful Sam Rockwell isn’t given enough to do as Bush here. But all three of the these actors have been Oscar nominated, and the performances are definitely the best thing about the movie. If only the telling of the story were more interesting.