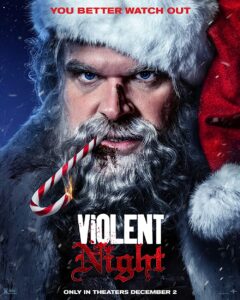 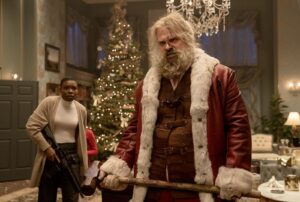 This movie is a whole lot of fun. Is it smart? Absolutely not. It’s a terrorist movie where the hero is Santa Claus. And he’s spending the movie fighting and killing these villains, one at a time. But the action is great, and the humor is actually pretty decent. With one dimensional characters, who are somewhat intentionally dopey, those things would need to be. The story here, involving a wealthy family at odds with each other who get robbed on Christmas, is pretty weak. Both Santa and the head villain are given little to no backstories. But that’s okay. The humor and the action are more than enough to make this an enjoyable guilty pleasure film.

Violent Night is a pretty fun, dopey movie. This is the Machete of Christmas Movies. It’s a guilty pleasure film. In fact, it’s about as B level as it gets, with a story that feels made for streaming, and humor that is definitely subpar. The character back stories are awful, and the dialogue isn’t much better. And yet,  despite all of these things, the movie still finds plenty of ways to be enjoyable.

What we have here is dumb fun in its simplest form. That means everything Christmas-related imaginable is used for a weapon, from a candy cane to a nutcracker to a snow blower to a Christmas tree star topper. And if there’s something Christmas themed that’s not used as a weapon,  you better believe there’s a pun in here or a one-liner joke, about it. Like when a grenade is jammed up a guys shirt and Santa mutters, “stocking stuffer,” before watching the guy explode. Now, these are examples of how the humor level is intentionally kind of dumb. But the action is pretty strong, and the movie does have fun with referencing other movies,  and making this the hardcore extreme version of those films, from Die Hard to Home Alone. All of that goes a long way.

The movie is made by the studio 87 North, which is the company of David Leitch and Chad Stayekski, the John Wick stuntmen turned directors. Their movies are hit and miss, from Atomic Blonde to Nobody to Bullet Train. Luckily this one is more like Nobody than Bullet Train, which means it is more about practical effects and a simple story than CGI and a complex plot. There’s nothing complex about this one, and that’s almost a joke in itself, with Santa often being asked how his magic works, and his explanation being merely, “I’m not even sure of that myself.”

The basic concept to the movie is a version of Die Hard meets Bad Santa. And what that really means is we’ve got a terrorist – heist plot with a team of villains that holds a bunch of civilians hostage during a one night event. We’ve also got a lone hero running around a single location by himself, during a Christmas party, taking the villains out, one by one. Only instead of being an ex-cop or an average joe, the idea here is… what if the hero was Santa Claus? The real Santa. And what if he’s not exactly a wholesome kind of guy, but instead more of a negative drunk (the Bad Santa element?) This is hardly a smart plot, but you gotta give it points for the level of simplicity it strives for and achieves, in a Snakes on a Plane, kind of way.

At the start of the movie we are with Santa (played by David Harbour, the real breakout star of Netflix’s Stranger Things,) as he sits at a bar having drink after drink. Both the bartender and another Santa who is sitting at the bar make conversation with him, and we learn that this Santa is down on the holiday and on kids, thinking they are spoiled and not appreciative, “always looking for the next cool thing.” The sequence ends with Santa going to the rooftop as the bartender comes up there to try to stop him. He flies away on a sled pulled by reindeer as she looks up in disbelief and vomit drops on her head. It’s a gross moment. Luckily it’s the only one like that in the entire film. There will be plenty of gore to come, but that’s it for the bodily functions humor.

From here, it’s time to meet our primary set of characters… the Lightstones. This is a wealthy family where the mom, Gertrude (played by Beverly D’Angelo from the Vacation movie series,) is a matriarch with a massive amount of wealth that her children have always been in competition for. Of those children, there’s Jason (the other protagonist of the movie, besides Santa,) and his sister, Alva. They are both grown ups with their own families.

We meet Jason first, as he’s waiting on the side of a road, and is picked up by his ex-wife (they might not be divorced, but are certainly separated,) Linda, and his daughter, Trudy. She just saw Home Alone and talks all about it. You better believe this will come into play later on, when Trudy sets up traps all around the house.  Linda drives to the holiday party at Gertrude’s mansion, where Gertrude has hired a catering company, fully decked out in Christmas costumes, as they serve food to the guests.

It’s no surprise when the catering company turns out to be a team of terrorists. They all have Christmas code names, like Gingerbread and Crampus, and they are lead by Mr Scrooge (John Leguizamo.) But before they even attack, we are in the house with the family, learning the dynamic between these two competitive siblings. Ava is the one who really hand it up here, insulting Jason every chance she can get. Her boyfriend / husband is a B level action movie star and their son is a preppy douche bag, making videos that say things like “living that bling life,” and “hashtag blessed.”

And then the attacks start. They begin with Mr Scrooge shooting the security booth guard, and it’s pretty smart the way the movie gives Scrooge his own entrance this way, instead of making him feel like part of the starring company. It definitely helps him stand out as the leader. Gertrude also gets a great entrance, not long before that, where she says the most vile things over the phone, as her family members keep thinking she’s about to enter tte room, and debating over what their poses and positions should be when she does.

The family dynamic and humor aren’t smart, but they are also kind of fun. And then we get the attacks. Santa happens to be in the house delivering presents at the same time that the terrorists arrive. He doesn’t want to be there and tries to run out (through the chimney,) only his magic isn’t working. And so we get the reluctant hero. The antihero. He starts fighting the terrorist, taking on one at a time. The first one ends with an ice sculpture puncture. The next with the star topper. After that, the action moves to a shed, and it becomes less interesting and more by the numbers as a sledge hammer is used. But luckily the Home Alone material is still on the way, and those are probably the best scenes in the entire movie. This one continues to pile on the references (the extraction team of specialists is straight out of Die Hard 2, complete with their white snow suits and everything,) and it all just makes for more Easter Egg hunting fun. Definitely not a smart film, but certainly an enjoyable one.