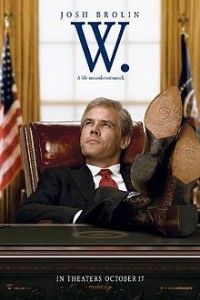 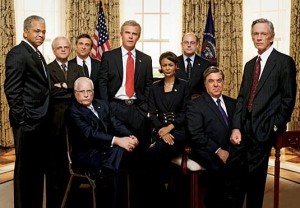 An interesting look at what made the man, that unfortunately leaves out a whole lot of things that should be in there.

You watch the movie W. to find out how this guy became president. that’s the reason why anyone watches it. we all know that george w. bush turned out to be a blundering fool whose father was president before him. but the thing is, instead of thinking of him as a daddy’s boy who used his father’s connections to get elected, the reality is that since his father was already president it should have been that much harder for him to get elected. nobody wants to elect somebody whose father was just recently president (only clinton separated them). but the movie doesn’t get into that. it doesn’t get into how this guy managed to convince most of us to vote for him, which is really the main reason we are watching it.

the movie does do a nice job of telling the story of who this guy was all the way up until he became president. in fact, the first half of the film, about w’s youth and growing up, is far superior to the second half. we watch as the boy goes off to college, joins a fraternity, and wants nothing to do with politics or his father. this guy is a heavy drinker and womanizer, but he does have certain skills. he does, for example, have the ability to remember the names of nearly everyone in the room at a frat party, when put to the test.

we see w. finish with school and try to find a job. and he doesn’t do so well with that. he attempts to work on an oil rig, but refuses to put in the energy and hard work that such a job requires. instead, he asks coworkers where they keep the beer and tells his boss that he’s not finishing the job. w. talks to his father about a deal they made that before he could get any part of his family fortune, he needs to spend a few years doing jobs.

the movie cuts back and forth between all of these scenes of w growing up, and scenes of the man already as the president, deciding things with his cabinet members and closest advisors. that touch might be a little confusing at times, but it actually works for a purpose. when the movie begins, we want to see w. as the president right away. we want to see the different members of the government that we know and the way these actors are portraying them. and by cutting back and forth, this movie is able to deliver on what we want to see.

the problem is that it just keeps on doing that throughout the entire film. and the more it does, the more it becomes hard to keep track of what has and has not happened. for example, when we see w. as president, sitting in the oval office, we know that he has been elected, but we do not know if september 11th has happened yet. and knowing or not knowing that makes a huge difference in understanding the motives behind his actions and the ways he might be thinking.

in fact, this movie never shows september 11th at all. it doesn’t even show w.’s immediate reaction to that event. i can understand not showing the planes go into the towers or anything like that, but you would think that this movie would of course show us the scene of w. hearing the news. you would be wrong. you would think that it would show us him discussing what his reaction should be with his advisors, and how he needs to get on the air fast and make a speech to the american public. no such luck.

this movie was directed by oliver stone, and his resume pretty much speaks for itself. i mean that as both good and bad. on the positive side, stone, of course, is a very talented filmmaker who has made countless great movies (most of them in the eighties). on the negative side, stone is known to be a director who makes movies about presidents and changes the facts. he did it in jfk and then again in nixon. and now he does it a third time with w. stone is a hardcore liberal, and he is a director with an agenda. he wants us to think w. is an idiot here, and we do, but just to make sure of it, stone avoids showing us anything that might make us agree with him.

when september 11th happened, bush was a hero. he got on the television and made a speech and got not only our country behind him, but other countries around the world, as well. his approval rating soared through the roof. but stone doesn’t include any of that. he’s not interested in telling bush’s story, from bush’s point of view, but instead, he tell’s bush’s story from his own (Director stone’s) point of view.

that’s why we never see bush run for president. we don’t see him run against gore and we don’t see him run a second time against kerry. why? because obviously bush did something right in those elections in order to win. obviously he won a lot of people over, and stone isn’t interested in showing anything that might convince us that maybe he was at time a pretty decent guy. now i could understand if the movie was just about his presidency. in that case, sure, you don’t have to show him getting elected. you can make the point that he was a decent guy when he was elected, but the movie is about how he fell apart once he took the position. only this movie isn’t only about him as president. it’s about the guy’s whole life, going back long before he ever thought about being president. and in that case, of course it needs to show him running for office and getting elected.

while it has it’s flaws, this is still a somewhat enjoyable movie. i love all of the impressions the a list cast of actors is doing here. thandi newton, playing condoleza rice, is particularly a lot of fun. so is jeffrey wright playing colin powell. and i like the way the issue of the weapons of mass destructon in iraq, or lack thereof, is handled. we get to see exactly why rumsfeld had to fall, and how powell opposed going into iraq. but when you think of this movie, there are two things that it seems just have to be in it. two things that you go to this movie to see more than anything else. the first is how bush got elected. and the second is how he reacted to september 11th. this movie doesn’t show either one of them. it’s pretty unbelievable, actually. how do omit both elections? how do you omit the most significant event in his presidency? stone does it. this guy has such an agenda, that it’s annoying. the movie isn’t bad, but it sure makes some big mistakes.