War For The Planet of the Apes ** 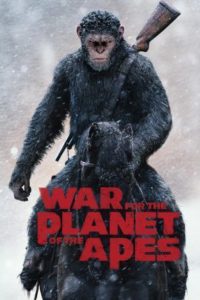 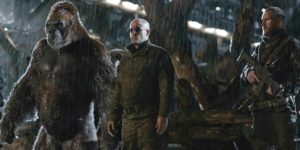 Not as good as the other, recent Planet of the Apes – Caesar trilogy movies, this one is bleak and uneventful for most of the way through.

Just like the other movies in this trilogy, the visuals are there snd are terrific, but this one by far has the weakest story. It’s simply about a disease that is affecting humans (known as the Simian Flu,) and how a military authority known as The Colonel (Woody Harrelson,) is leading a rogue army group out to destroy the apes as much as possible. He kills humans who are infected and locks the apes up in a prison camp. And Caesar leads a small band of characters on a mission to find a new land and to find to find the Colonel. The story doesn’t go much further than that, and it’s a shame. Instead, we get lots of scenes of hearing conversations about things that happened, instead of actually seeing the things happen themselves. The Colonel as a villain is pretty cool, but there aren’t enough human characters here, and there certainly is not enough storytelling.

War For The Planet of the Apes is a movie that takes more than one viewing to really get the whole sense of. I know this, having only seen it once, and walking away pretty unsatisfied. The first film of this trilogy, Rise of the Planet of the Apes hit with a solid, unquestionable success. The second movie, Dawn of the Planet of the Apes, did not. That movie was dark and bleak and took more than one viewing to appreciate. It turned out to be a great film, with the terrifically villainous and menacing Khoba, (played wonderfully by Toby Kebbell, in full motion capture,) but it wasn’t the kind of thing that was easy to get the measure of. It appears that the same can be said of the follow up film. And both movies were by the same director, Matt Reeves, whereas the first film of the trilogy was not.

Part of the reason for knowing this movie needs to be seen more than once has to do with the visuals. At the very least, these movies are visually stunning. What they do with motion capture and brining the apes to life, and then throwing them in the middle of action scenes, is absolutely incredible. But when you watch a movie like this for the very first time, the thing you try to follow most is the story. And considering how dark these films are, (not just in tone, but actually in what you can see and how much you can make out,) it’s not always easy to follow the story. Which means it takes effort, and that means your attention is solely focussed on that, and not as much focussed on the details or remarkable effects.

And unfortunately, the story here is kind of weak. It’s about the final battles between the humans and the apes, or at least it should have been. This one is more focussed on the apes in a prison or outdoor internment camp, overseen by a man named the Colonel (Woody Harrelson,) then it is on the actual battles. Before we get to that, however, we open with a scene of soldiers moving through the jungle in quiet, precautious mode, fully armed and ready for a fight. There are apes and gorillas working with these soldiers, which right off the bat throws us off a little. And then an army of apes attacks them and wins. Caesar shows up, in charge of the ape army, and decides to show mercy and let the four human survivors  go. He is trying to show the Colonel that he is merciful and does not want war. It doesn’t exactly work.

We get to here more about the Colonel and how the human army has apes working for him. Caesar tells his apes that the ones working with the Colonel are deserters who followed Khoba and now expect that Caesar’s army will punish them for their betrayal. So instead, they have turned to the other side. And then we get to meet the Colonel, when he shows up in the cave where Caesar’s family dwells, hanging from a rope, sneaking through a waterfall, with a face that is fully camouflaged. We got to see this moment in the trailer, but it still looks incredibly cool here. Woody Harrelson has never looked more badass.

The Colonel’s attack killed Caesar’s son and wife. Before this happened, however, Caesar’s son returned home from a mission to tell the apes about an area he found where the apes could move to and be safe. Now Caesar decides to go see this area for himself. He is not ready to move the entire group of apes there yet, but he does get some company on his mission, in the form of about three other apes. They ride off on horses and come to an abandoned soldier village. There is one soldier left, who raises a gun on them, forcing them to kill him. That’s when they discover that there is a little girl who he has been caring for, and take the girl along with them.

Next they come across and ape who has been living on his own and calls himself Bad Ape, voiced by Steve Zahn. This is a cute little guy who joins their group and helps shed some light on what’s been going on. The Colonel’s team is called the Alpha-Omega and they are a rogue army force who is out there on their own killing not only apes, but also certain humans. There is something going around known as the Simian Flu. It’s a disease that makes it so that humans first lose their voice, then lose control of their functions, and then die. Any humans who have caught the disease were executed by the Alpha-Omega. Because of this, the northern army, which considers the Alpha Omega a rogue force, is coming after them. But the Colonel and those who follow him believe that the Alpha Omega is pursuing the greater good, and that by executing infected humans, they are preventing the spread of the disease.

Caesar and his band now find the place where the Colonel and his troops have camped out. It’s a former quarantine facility which is now serving as a prison or internment camp for the captured apes. The Colonel has the prisoner apes building a wall while not being given any food or water. Caesar allows himself to get captured in order to get inside the prison, and the little girl who was with his group finds a tunnel underground, which she uses to sneak Caesar some water. From here, we start moving towards our final showdowns. The northern army is on their way to take out the Colonel, but not if Caesar can get him first.

There are a number of problems with this movie. The title implies that this is a War, only it really isn’t. There’s one battle at the start of the film, and then an attack of one human army on another human army, with apes trying to escape from a prison, at the end. That’s about it. When a trilogy builds up to a war, with us constantly hearing throughout the three movies that a war is coming, that war needs to be something substantial. And for some reason, it never really is. Not in X-Men The Last Stand, or in this movie, or in The Hobbit: The Battle of the Five Armies. This isn’t the story of a war, but the story of a disease. The movie should have been called The Disease of the Planet of the Apes. Only that doesn’t sound as climactic or exciting.

Most of the problems lie with the story. This movie seems to be content with telling us more than it shows us. For example, we don’t see the deaths of Caesar’s wife and son, but only hear about them. And we don’t see the son on his mission to find a new home for the apes. We only see the son return and tell of what he found. And then next thing you know, the attack has happened and the son is dead. The old rule of “Show Don’t Tell,” is an important one, and maybe this movie think it’s following it, by showing us Caesar discover people who have been infected by the flu, but it’s not enough. We miss a number of important moments with the son in the opening act of the film, and it’s a pretty big missed opportunity.

Similarly, we don’t get ton see any internal conflict between The Colonel and his men over what they are doing. The film seems determined to give the humans as little personality as possible. The only one who even comes close to having traits of his own is the Colonel. Considering that the actions they are taking, to execute infected humans,  has made them an enemy of the U.S. Army, you would think that maybe some of these men would be questioning whether or not what they were doing was the right thing. But again, this is a missed opportunity. Instead, this movie is very simple to cut to the bare bones. There’s a flu going around and a Colonel who believes in showing no mercy. He executes both infected humans and apes, and locks the non-infected apes up in a prison camp. And that’s pretty much it. It’s not enough. The movie works on the usual visual level, of these sorts of films, but in terms of story, this one leaves a lot to be desired.