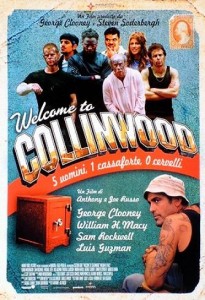 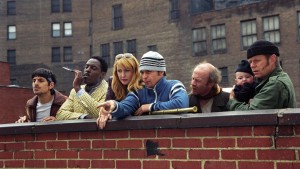 A fun movie with a couple of colorful characters, and a somewhat witty plot.

An enjoyable movie, this one does feel familiar, with a plot about misfits trying to pull off a heist. despite a storyline that’s been done before, this movie finds the humor in it’s characters and their lifestyle, and uses that to get us on board. this is the story of a way of life as much as it’s the story of a job. while the job part doesn’t always work, the lifestyle angle certainly does. these characters are pretty funny and the movie takes chances with trying to be original whenever it can. take the girl with multiple boyfriends for example. this isn’t a girl who says she has a boyfriend when she really doesn’t, or a girl who really does have a boyfriend. this is a girl who has a bunch of boyfriends, and sam rockwell plays the guy who keeps trying to figure her out. it’s the human elements, like this, that are more interesting than the actual job.

Welcome To Collinwood is an entertaining movie. it’s a heist film that features a group of down and out losers hearing about a job and attempting to pull it off. the movie plays like a comedic version of the bank job or small time crooks, or any other movie where a group of misfits try to go through the wall of one building in order to break into another and pull off a big robbery. this movie has a number of things that those other films don’t, but the storyline still centers around the job, and so it’s basically just a comical version of those other films.

a major difference is that this movie is about the neighborhood, as much as it is about the job. collinwood is the town where these street guys pull small jobs and have their own code. they talk with a set of vocabulary words that includes terms like belini, molinski, and kuputchnik. and you can tell, from hearing the words used over and over again, exactly what each one of them means.

this is the first movie by the russo brothers, the guys who took over the captain america movie series with the sequel to marvel’s first film, and ran away with it. there’s no question they’ve got talent, and with collinwood, they get a well-rounded cast to help bring their first feature to life. the stars are guys like sam rockwell and william h. macy. there’s patricia clarkson and luis guzman and isaiah washington on hand too. the movie was produced by steven soderbergh and george clooney, and the cast is composed of actors who have been lifted right out of soderbergh and clooney’s films. from clarkson who was in clooney’s good night and good luck, rockwell, who was the star of his Confessions Of A Dangerous Mind, and a whole slew of actors from out of sight (guzman, washington, even clooney himself), the movie is loaded up with talented and familiar stars.

they bring a great likability and charm to the movie, kind of the same way that the actors of snatch did for the guy ritchie film. these actors are all just a small part of the puzzle. rockwell is the star, if there even is one, and if there’s going to be one of these actors taking center stage more than the others, than rockwell is the right guy. after all, he’s the only one who has carried a movie all by himself. literally. i’m referring to moon, of course, the outer space version of cast away.

the first half of the movie centers around the proposal of the job. we meet cosimo and toto (guzman and michael jeter) while they are trying to rob a car and prove to have the worst timing and luck in the world. as cosimo is breaking in, a police car is cruising by. everything seems fine, when the car passes by, but then an alarm goes off, and suddenly the police car is high-tailing it in reverse. it’s a funny opening scene that lands cosimo in prison.

he now has his longtime girlfriend, rosalind (clarkson), go out on his behalf, looking for a molinski. that’s someone who will take the fall for him and claim that he, and not cosimo, was the one breaking into the car. the reason why cosimo wants to get out so bad and is willing to pay fifteen thousand to anyone who will take the wrap for him, is because he has an inside tip on a new job. there’s a great robbery ready to happen, and all he needs is a way out of prison.

instead of getting him that way out, our characters manage to infiltrate the prison, get the details of the job out of cosimo, and then walk away. there’s a great moment where rockwell’s character, pero, tries to convince the judge to lock him up in place of cosimo, and does such a bad job selling his story that the judge decides to lock them both up instead. only pero’s up to something and he manipulates cosimo into revealing the details about the job just before pero is able to walk out of prison and start working on it himself.

the mid-section of the movie is about the character’s lives. there is a relationship that arises between one of the guys and the sister of another guy. leon (washington) always talks about his sister and how she is engaged to some top level businessman who is going to get her out of the area. only she has a thing for basil (andy davoli), and can’t resist him, despite knowing it is not the move she should be making. meanwhile, there is also the relationship that springs up between pero and carmela (jennifer esposito.)

this relationship is probably the funniest in the film, from their first meeting (a faked robbery and rescuing by pero’s friends), to her dating situation. carmela dates tons of guys at the same time. in a dance hall scene, she even has two dates going on at the same place at the same time. when pero meets her other date his reaction, “is this a joke?” is priceless. it’s all a lot of fun, but unfortunately when we finally do get to the job, it’s not nearly as entertaining as everthing that came before it.

the job is okay, but it’s not the hilarious climax we were probably expecting. other than one guy losing his underwear while hanging from a wire, most of the job scene isn’t really that funny. still, by this point we care about the characters enough to follow them through anything, just to find out how their fate turns out. these guys really are a bunch of fools, not even sure of which wall to knock down. the result is pretty enjoyable. there are a lot of things to like about this movie, including the humanity and pity it takes on it’s characters. from a cop who tries to provide for his family by being honest, and comes face to face with crossing the line, to a single dad with a broken arm and a baby, this movie might lose it’s humorous edge a little bit towards it’s ending, but it never loses our interest or attention.