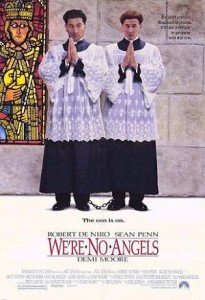 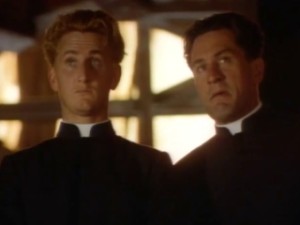 A funny movie about two convicts, escaped from prison, who pose as priests as a monastery. What makes this movie work is the idea that the two people they are impersonating are actually famous priests who have written a book, and that they now have to act these roles in order to convince not only the people at the Church, but also the police. The storylines here are pretty interesting, with both Robert De Niro and Sean Penn getting their own stories to fall into. There is also a very likeable supporting cast, including John C. Reilley, Demi Moore, and Bruno Kirby. The movie keeps its plotline simple, but also manages to avoid cliches and not be predictable. And Sean Penn in particular really knocks it out of the park with the different sermons and speeches he gives, all flying by the seat of his pants with some candid improvisation.

We’re No Angels is a fun and light-hearted movie starring Sean Penn and De Niro as convicts who have escaped from prison. It’s a remake of a Humphrey Bogart film, and for these actors, it’s the kind of movie that came their way both at the exact right time in their careers. Granted, DeNiro had been kicking around for about a solid decade in a half at that point, but in the seventies, he was finding his way, and by the time this film came around, he was a seasoned pro. And for Sean Penn, this was one of his earlier movies, and he still had quite a lot of charm. All of that comes across in this film.

The two of them are good friends in prison at the start of the film. The Warden makes a speech to the prisoners and Ned (De Niro) and Jim (Penn,) are whispering jokes and comments to each other, goofing around during the talk. As a result of this, the Warden has the two of them brought in to watch their friend, Bobby, get electric chair. Only things don’t go according to plan, and Bobby manages to get a gun and escape. He takes Ned and Jim along with him. The prison scene is pretty fantastic. It is well orchestrated and straight to the point, but the action and excitement are there too. If this movie were made today, they would have to show us exactly how Bobby was able to get a gun, but back then, people were more willing to just go with it, and it works pretty well.

Now, Ned and Jim are on the road, coming out of the woods, where they stop to help out a woman who has ran over a deer with her car. She asks who they are, and thinking past and remembering a sign they saw, Jim tells her that they are priests. That’s enough to get the woman to buy into their story and give them a ride. And then when they get to town, she helps them out again. This time its at a convenience store where news has reached the people of the three escaped convicts. The man who works the counter suspects these two men who have just come in, and is ready to pull a gun on them, until the old woman shows up and tells him who these two guys are.

Already, this movie is pretty entertaining. And the fun is just beginning. The woman brings the two men to a bridge where the police are doing a patrol, but where a local priest is also standing, searching for two priests who were supposed to arrive. They never did. And now the woman claims that she found them. As it happens, there are two celebrity priests who wrote a book, and who Ned and Jim are now posing as. This reminds me of the Seinfeld O’Brian episode with our main characters in a limo unknowingly posing as famous Neo-Nazis. It’s funny to think that Ned and Jim just wanted to tell the woman they were priests and be on their way, and now they are not only dragged into the Church, but are posing as well known men. What’s hard to believe is that nobody knows what these men are supposed to look like, even though there is a picture of them on the back of their book. We just get one quick comment about how they look nothing like their picture, and that’s it.

And right when they arrive, the two of them are put on the spot. Father Brown (Penn) is asked to say grace at their first meal, and he just says a few quick words about how they should be nice to strangers, because sometimes they might find themselves being a stranger somewhere too. One of the priests, played by Wallace Shawn, calls him out on it, saying that it was a terrible grace, but the other priests take Father Brown’s side and defend it. Father Brown is called to give another speech later on in the movie, and he does so by reading off the back of a hunting pamphlet and making the words and his expression sound religious. Penn knocks these speeches out of the park, delivering them with a New York accent as a guy who is just telling it lik eit is.

John C Reilley is on hand, working at the Church, as a young monk, and he has nothing but admiration for Father Brown. Reilley, in real life, was taken under the wing of Penn at the time, coming off the movie Casualties of War here, where Penn brought him into this movie. After that, they made State of Grace together. Here, the Reilley character is a lot of fun. He listens to everything Father Brown says as if it is the bible, and often copies the actions, no matter how ridiculous they sound. These include wearing a clotheshit on the back of his neck, because it is a reminder that we could all be snatched up at any time, and not wearing shoes when you walk around, because it brings you closer to the earth. Of course Father Brown has real reasons for why he’s doing these things, but makes up some quick justification and tells the Young Monk, only to watch The Young Monk copy him.

While Father Brown’s character is the one called on to make speeches, and mostly deals with the Young Monk, it’s Ned (De Niro,) who has the real story, getting pulled in by Bruno Kirby’s detective to help absolve him of his guild for sleeping with another woman while married. Kirby brings Ned to this other woman, Molly (a young Demi Moore,) to speak to her, only Molly wants nothing to do with either one of them. She has a daughter who is deaf, and only slept with Kirby for some money. She wants her daughter cured, and if Ned can’t help her with that, then she’s got no interest in talking to him.

It’s pretty cool the way that Bruno Kirby’s story is used just to bring us to Demi Moore’s story. What’s also pretty neat is that the movie takes a whole new path when Bobby shows up again, is caught by the police, finds out who these two new priests really are, and threatens to turn them in. That leads Ned into a situation where he has to help Bobby escape. The excitement builds to a great climactic bridge scene with both funny moments and exciting ones. There’s even a waterfall jump that rivals Harrison Ford’s in The Fugitive.

There are lots of elements that make this movie so much fun. One of them is that it never tries to get overcomplicated or twisty. The storyline is straight forward and so are each of the new developments. Another thing that makes the movie work is how it is not really predictable. For example, in any movie where there is a secret that brings characters together, and that only some of the characters know, by the end of the movie, that secret will have come out. It’s like a rule of cinema. The secret will be discovered, the people who lied will be banished, and by the end, they will be welcomed back. We’re No Angels is one of the few movies that goes against the grain and doesn’t play by the rules. And best of all, the movie works because it is funny. Sean Penn in particular really finds his stride with theis film.

While the movie definitely works, there are some areas of We’re No Angels that could have been a little stronger. One of these is a little more explanation about the priests that were supposed to be there, at the monastery, and what happened to them. It’s a little convenient that these two guys show up acting like priests right at the same time that two priests are supposed to be there, and have gone missing. Add on to that the fact that nobody there has ever met these two other priests, who were supposed to be there, before. The movie could have tried a little harder to make this believable. Maybe there could have been one person there who actually had met them before, and knew the truth, and somehow Ned and Jim always had to do things to prevent this guy from speaking. Something like that. The ending, of what happens to these guys at the conclusion of the film, could have also been a little more clear. Other than that, the movie is pretty great, funny, and creatively simple.