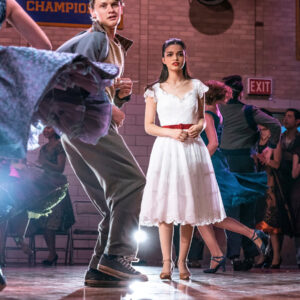 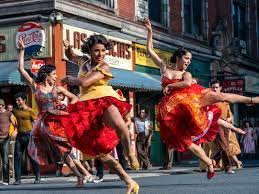 A very well-made film with great artistic beauty and musical numbers that still manages to not be all that exciting.

A very well-made movie this one looks and sounds beautiful. Spielberg outdoes himself here, showing what a masterful director he is, every chance he can get. And yet the movie doesn’t feel nearly as exciting as it should. Maybe that’s because it’s too long. At two and a half hours, this thing should have really been cut down. Other than that, and a few minor issues from time to time, this one is pretty good.

The new West Side Story remake, by Steven Spielberg, is a pretty solid movie. It’s about as good as anyone could have done with remaking this classic. And yet, something about it doesn’t feel all that exciting. Beautiful, yes. Thrilling, no. Maybe after living through (and still being in,) the golden age of TV, and also being right smack in the middle of the golden age of superhero movies, a musical set in the old-timey New York just doesn’t cut it. It’s not that no musical can work… La La Land certainly blew the roof off, as a semi-recent example. But that was set in current times. And it tried to do something new. This new West Side Story might be a remake for a new audience, but when you’re still setting it in an old time period, then what does that even mean?

Maybe it’s that the movie is trying too hard, and that you can feel that around every corner. Maybe it’s that the movie wants so badly to be politically correct that it make sacrifices in order to specifically accomplish this. But the thing is, nobody could have done this better. Not in terms of the look, colors, camera work, and feel. The movie, as directed by Steve Spielberg is a masterclass in how to make a truly beautiful movie. It uses the same songs and beats as the original, yet also makes changes that are generally improvements. It’s definitely a good movie, it just doesn’t have the same level of intensity and eagerness we are used to these days.

Maybe part of the problem is the lack of surprise. If you know how the story goes, then you know everything that will happen. Even if you don’t, and you forgot some of the twists, this still doesn’t feel as explosive or controversial or revolutionary as the movies and TV we generally have at our fingertips due to steaming networks, today. This is a movie that takes a story about gangs who hate each other because of reasons that have a lot to do with race and anger, and tries to paint a politically correct version of all that, as if the roots of what the story is really about can just be washed away.

Let’s put it this way… the characters are supposed to hate each other because they are from different parts of the world, the Americans versus the Puerto Ricans, and yet this movie tries to argue that it doesn’t matter where the other gang is from. Characters in the movie make the claim that it has nothing to do with race, that these gangs hate each other simply because it is a turf thing, and it’s just about who runs the area. It’s as if they are afraid to admit that they really don’t like people from another country coming here and taking their jobs and their women, and all that. Maybe those ideas would hit too close to home with the political landscape of today, but even still, if you’re gonna remake this movie you have to be honest to what it’s really about.

Another example of making sacrifices in order to be more politically correct is the use of Spanish. There’s a whole lot of Spanish spoken in this movie. Now, there are some good reasons why they do this. it’s not just about being PC, but also about realism. Hispanic characters really would be speaking Spanish to each other. But for non-Spanish speaking audiences, this is a problem. Whole conversations, back and forth, happen in Spanish. And yes, we can understand the tone people are speaking in, but that’s not enough. We want to know what they are actually saying. A few words here and there, we could miss and be okay with, but whole conversations is a different story. At least give us subtitles.

These problems aren’t major, but they also would have been pretty easy to correct, in a movie that tries so hard to do so much right.  The movie starts with an overhead crane shot that travels above all sorts of rubble and destroyed buildings. It literally comes down on a wrecking ball, zooming in to a distance that is about as close to the ball as you can get. The lengthy tracking crane shot to begin the movie definitely shows Spielberg’s skill. From there, we are with the Jets and the Sharks, our two rival gangs as they chase each other down in different locations around the city. The whole thing ends with a brawl and with the police showing up, and with one character getting a nail through his ear, (in the original it was simply a knife cut on the face, but I guess this movie had to take things up a notch.)

A police detective, played by Corey Stoll (one of the few recognizable actors in this one,) breaks up the brawl. He sends the Sharks on their way, but not before they join together to sing a song in Spanish as a sign of protesting for their rights, much like the French standing up in the cafe to sing their National Anthem in Casablanca. After the Sharks take off, we stay with the Jets who talk to the detective. He tries to reason with them about cutting the fighting out, telling them it’s only a matter of time before both gangs are out of here anyway, with all the construction that is going on. The whole area is being transformed into Lincoln Center the upper class performing arts center of New York City.

We now leave the scene with each gang meeting separately to discuss how things went. They are both planning to make appearances at the big dance that night, and the leader of the American gang, (the Jets,) a young man named Riff, talks about hoping to get his friend, Tony, to come along. Tony has just been released from prison for beating a man half to death. As played by Ansel Elgort (The other familiar actor in this movie, from his Baby Driver fame,) he’s the anti-hero of the movie as a character who has had a checkered past, but is now reformed, and the moral center of the movie. He’s the guy who doesn’t want to fight when everyone else around him does.

The dance is a fun scene with characters being asked to step into a circle in the middle of the dance floor and using this to try and intimidate each other. This is also where Tony and Maria first hit it off. They’re the Romeo and Juliet couple of the movie, the star-crossed lovers from different worlds. Their infatuation with each other seems a little much (kissing when they just met each other and have barely spoken a few words?) But this is meant be magical, like a fairy tale, and so we just go with it. And then we get the proposal for a fight. This fight is so big and important (the stakes are that whoever wins will own the area,) that the rest of the movie is pretty much all about characters talking about it or getting ready. And that’s fine. It’s entertaining to have a story built around and leading up to a big event. Especially when there are fun musical numbers that help keep things moving along the way.

Spielberg wisely changes the location of some of the songs, and that works too. “America,” is now set in the street instead of on a rooftop. “Officer Crupkie,” is now set in a police station instead of at the store. It all works. The music here is great, and Spielberg uses master camera work to accompany it all. The problem is that the movie is too long. This takes away from what should have and could  have been a lot more exciting. The film is two and a half hours. It goes on for a solid thirty minutes or so after the fight. The thrill is over, so why prolong the movie? Musical numbers like “I Feel Pretty,” come after the fight when they should have been moved to earlier in the film.  The movie is good and beautifully done, but it does feel too long and a little too slow, and those things definitely don’t help.