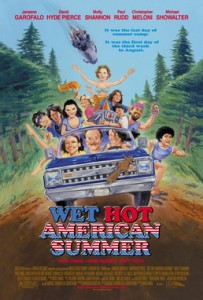 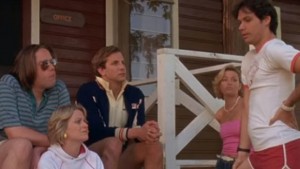 A fun movie that really captures the essence of sleep-away camp and mixes it with comedy.

Wet Hot American Summer is the debut movie by the guys who made the tv show “the state” and it is filled with fun characters and a very likable cast. It’s also one of only two great sleep-away camp movies that i have ever seen (no i’m not counting friday the 13th). the other great movie of this genre is meatballs, also a comedy, starring bill murray.

but unlike that movie, which is mostly a solo act with murray carrying the show, Wet, Hot, American Summer is completely an ensemble piece with a wide variety of characters. and for each set of characters, there is at least one essential storyline and then a ton of minor scenes that they fit into, not necessarily relevant to any plot line, but just in there because they are funny scenes.

there are many threads of plot lines going on here, often involving romances or characters who want to get laid while others wonder about each other and try to accomplish their goals. for amy poehler and bradley cooper (she was on SNL when this movie came out, and he was a nobody), their mission is to put on a talent show with the campers, that will take place later that night.

the movie takes place on the last day of camp before the kids go home to their families. with that as the situation, it might seem out of place that there are so many fresh romances just starting up. the movie justifies that by showing us that maybe these characters had pent up feelings throughout the summer and are treating today like their last chance to act on them on these feelings.

One of the main characters in the movie is a guy named cooper (coop for short), a counselor who is infatuated the hot young female counselor, lindsay. only problem is, lindsay has a boyfriend. he’s played by paul rudd, and is a complete asshole in the funniest of ways. there’s a great scene early on where he just flings his plate of food onto the floor for no reason at all and then when camp director janeane garafolo catches him and makes him pick it up, he acts like it is the hardest thing to do in the world. he goes through the motions to pick the plate up, but does it in such a lazy way that he makes it look like he’s lifting heavy weights off the floor.

cooper’s situation is the one that i have always found the most interesting and relatable in this movie. he wins lindsay over in a scene where they are sitting outside together, but then he goes away from her and comes back to find that she is back with rudd and claiming she was wrong to have that moment with cooper. this continues a couple of times throughout the movie, and it actually gets funnier and funnier each time with cooper going to extreme lengths to transform himself, only to wind up back in the exact same place.

there are plenty of other plot threads going on here too. michael ian black, the most recognizable actor from the state, is a counselor with a vendetta against one kid who never showers, but he also has a secret of his own. and janeane garafolo starts up a flind with astrophysics professor david hyde pierce.

There are plenty of things in the movie that do not work. with so many different jokes and story lines and ideas, that’s sure to be the case. it’s the reason this is a three star movie and not a four star one. the meteor thing that’s headed for the camp is just one of those failed plot lines. but in most cases, it’s more like individual jokes or scenes. there’s one, for example, where the counselors go out of town and end up on a heroine binge. it’s n0t meant to be real, but a fantasy of sorts, only it’s not really all that funny.

another plot line that doesn’t quite make it involves the cook who mutters gay comments under his breath. it starts out very funny, with him saying these things and the waiter he works with overhearing them, but as it goes on and the routine becomes more acceptable to everyone around him, the material also becomes less funny.

Wet, Hot, American Summer is filled with sexual tension and that goes a long way. from the campers who run around the girl’s camp trying to leave after a raid at the start of the film, to the counselor on a rafting trip who desperately wants to get back to see what might happen with a girl he made out with, the spirit of sex and desire is in the air all over this film and it goes a long way. there are certainly plenty of jokes that fall flat, and a couple of story lines that don’t work, but the characters are what really keep this movie alive. every one of them is funny and unique and a perfect part of the ensemble in a way almost reminiscent of boogie nights. this movie is of course very different from that film and total slapstick, but the cast comes together perfectly and makes this movie a lot of fun.