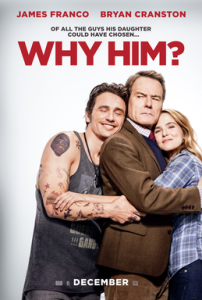 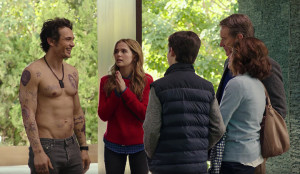 With some of the dumbest humor imaginable, this movie does not work at all.

A very stupid movie, this one tries to be a modern take on something like Meet The Parents or Guess Who’s Coming To Dinner and falls way short of the mark. The storyline has a girl bringing her family to town to come meet her boyfriend, and having the family stay over at the boyfriends house. The new angle here, from other versions of this kind of story that we’ve seen before, is that the boyfriend is a billionaire. So the family is staying over at his mansion. But the boyfriend is an idiot, and the jokes are mostly about how stupid or inappropriate he is. It’s a combination of that and jokes about the house and the family dealt no with it, (paperless toilets, surprise atttacking butler.) This content is pretty dumb and not very funny at all.

This movie is dumb. Period. It’s about a Guess Who’s Coming To Dinner kind of situation where the parents and brother of a girl go out to California to meet the girl’s boyfriend. And the boyfriend is a total ass. He’s not a bad guy or anything, and that’s kind of the point of he movie, (that he’s got a good heart and is kind to others,) but boy is this guy stupid. He’s got no common sense or social etiquette of any kind. And we’re to believe he’s a millionaire genius? He wouldn’t even be allowed in the same room as the people who could have financed his ideas.

The reason why this movie looked decent is its cast. Really, it’s two stars and two stars alone. James Franco plays the boyfriend, (Laird,) and Brian Cranston plays the girl’s father, (Ned.) But every other actor in the movie is a no name, (save for Cedric the Entertainer in a tiny role.) Now this lack of casting normally wouldn’t matter, and a movie with a completely unknown cast could be great, but when the only reason to see the movie is the cast, you need a little more than what this film is offering.

Cranston is a star on the rise ever since the monster success of his show Breaking Bad. But he hasn’t exactly found the right career footing in movies. So far his films have all been realistic crime dramas / historical pieces. He’s played the president, an undercover FBI agent in the drug trade, and a blacklisted screenwriter. What Cranston needs to do is find his way of into some Sci-if or superhero movie. Fast. At least with Why Him, he is trying something new, with comedy. If only the film wasn’t so awful.

The other star is James Franco, another actor who has been riding up over the past ten years. Joining the Seth Rogen team, as one of the integral players, has been great for him, (he was there from the beginning with Freaks and Geeks, but the movies are a whole other ballpark.) whilw his movies with Rogen are always funny, this film pretty much proves he’s not all that strong without his friend in the film.

We meet Laird, the Franco character, during a FaceTime call with his girlfriend, Stephanie (Ned’s daughter.) He talks about doing some “Netflix and chill,” and mentions all of the service’s popular shows. It’s this movies attempt at grabbing the younger audience. And it’s also meant to hold us back from seeing Laird in person a little bit. Similarly, the next time we see these characters is again over the phone, (or Skype,) during Ned’s party. They patch in a video call from his daughter and guess who walks into the background and immediately pulls his pants off. Laird is suddenly butt naked in the background, talking about doing it. This is about as funny as the movie is going to get.

The family now comes to visit Stephanie and is super excited about  the deal and upgrade Ned got at a hotel. Only they are immediately told by Stephanie, upon their arrival, that they won’t be staying at a hotel. They’ll be staying at Laird’s place. Now, there is no way that the family, and in particular, Ned, would agree to this considering his excitement about the hotel. Granted Laird’s house is a mansion, and is pretty amazing, but even still, between the uncomfortableness of staying at a strangers house and also the hotel room deal, this just wouldn’t happen. And all it really does is put the characters in a situation where they are surrounded by strange devices and people who work at the house.

There’s the butler, played by Keegan Michael Key, who is extremely intrusive and annoying, and has s thing where he attacks Laird, at random times, in order to keep his boss on his feet. There’s also an i toilet or something like that, which is a paperless toilet that sprays your underside with water just as much as you need. The idea isn’t bad, but the malfunctions with it, that lead to Ned on the toilet with multiple people walking in the room to try and help, are ridiculous.

All of this is meant to drive Ned up the wall, only it doesn’t really work. He’s frustrated, and him and Laird do come to blows at one point, (another stupid idea,) but he never reaches the kind of levels of anger that a good comedic actor can achieve, (think Richard Dreyfus in What About Bob or Steve Martin in Planes, Trains, and Automobiles.) A perfect example is that Ned never moves out of the house. He stays there and just let’s it keep piling on, and that includes all kinds of emails and phone calls about how his job is falling apart. Paperless is in (Ned works for a printing company,) and there’s no place in the future for his line of printers.

There’s a lot of bad in this movie, and very little good. Ned and Laird really have no connection, and that’s the thing the movie should strive to accomplish most. Laird tells Ned that he wants to propose to Stephanie, but won’t do it until he has Ned’s blessing. That’s great news to Ned, who has no plans to ever give this blessing. And rightly so. Laird is a lovesbke idiot. We are meant to focus on the lovesbke angle, and say, “well, yeah, he’s dumb, but he’s a kind and generous teddy bear.” But he’s still dumb and innapropriate, and that kind of stuff does matter.

Why Him wants to be a modern take on other, better films. It’s Meet The Parents meets a whole ton of other movies including There’s Something About Mary, (that toilet scene is a clear take on the famous zipper scene in Mary.) But unlike those other movies, there is no likeable, relatable character here. There’s no Ben Stiller or John Cusack role of an Everyman dealing with some very unhappy people. Instead it’s crazy meets angry, with nothing in between. This would be like if Dr Marvin’s daughter fell in love with Bob (Bill Murray’s character,) in What About Bob. It doesn’t work. Neither the humor no the storyline hits its mark and what we are left with is a disaster.