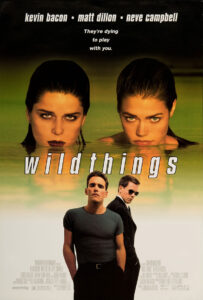 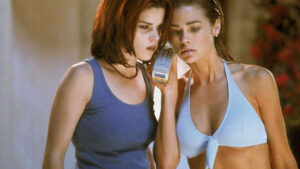 A steamy, Florida film noir that knows exactly what it’s doing as it mixes sexual energy with crime and mystery.

Talk about a seductive, steamy, dirty Florida noir. This movie has got all competition best. It not only tells the story of high school students involved in sex crimes and murder, but also features more twists and double crosses than probably any other film in history. Now, there is such a thing as too much, and this movie definitely crosses that threshold, but for the most part it’s courageous attitude and ambition are appreciated, as it constantly goes for the jugular, and for the most part, delivers.

Wild Things was a movie that came out in 1998, right when the teen horror movie craze was on its way out (Scream, I Know What You Did Last Summer,) and the film noir craze of the nineties was at its peak. This was the same year that brought us Out of Sight, The Spanish Prisoner, Palmetto, and the Big Lebowski. It was a strange time to say the very least. The craze had started back with Pulp Fiction, in 1994. And for the next few years after that, every other movie was a crime-heist film. But then the teenage movie hit in 1996 with Scream, and Wild Things was the first (and maybe only,) movie to successfully combine both genres.

The movie is a steamy, smutty Florida set film noir, in the tradition of the classics, like Body Heat. Only, this one, unlike other sex-heavy noir films like Basic Instinct, features high school students. Now that’s some risque territory. They wouldn’t exactly be making a movie like this today. But in the late-nineties, teen movies were all the hype, and if there was a way to include either horror or raunchiness than it was hitting multiple markets at once. It was no coincidence that this was the very same year as American Pie, another teenage movie heavy on the raunchiness.

But Wild Things wasn’t just about the steaminess and intimacy. It was first and foremost a mystery, and a hell of a good one at that. The movie features a guidance counselor, two high school students, and one detective who suspects them all of being up to something. Matt Dillon plays Sam Lombardo, a guy who is known for taking students under his wing and helping out those less fortunate. He runs a sailing club where he takes students out on the water and teaches them the ropes after school. And he is the one who is there whenever a student gets in trouble and needs someone to call for help. When we meet Lombardo, he’s giving a lecture in the school auditorium about sex crimes and brining in two detectives to talk to the students about it.

One of these detectives is Ray Duquette (Kevin Bacon,) the one who is suspicious of our other characters, and always lurking around looking for clues. The other detective is Ray’s partner, Gloria (Daphne Rubin Vega,) who thinks Ray might be going too far with this one, getting too invested in this case. And what case is that? The one of two high school students who accuse Sam of raping them. It all starts with a school car wash that isn’t actually at the school. Kelly Van Ryan (Denise Richards,) shows up at Sam’s house with one of her friends in the morning, and is all ready to wash Sam’s car. They did arrange for this to happen, when he got back from the glades, and his car was all dirty, but the door to door service seems a little much.

From there, Kelly and her friend finish the car, and Kelly tells her friend to leave. Then Kelly quietly steps into Sam’s house, dripping wet, and the screen goes black. Kelly walks away from the situation claiming that Sam raped her. Sam pleads innocence. And so Ray and Gloria are put on the case. They go to see Susie (Neve Campbell,) another high school senior who lives in town and has had dealings with Sam. She’s one of those students who Sam has had to bail out from time to time, in order to keep her out of trouble. And unlike Kelly, Susie is from the wrong side of the tracks. While Kelly lives the life of luxury, with her mom being heiress to her grandfather’s fortune, Susie lives down by the swamp, where her older brother runs a show where he wrestles with alligators.

When the detectives go to see Susie, she tells them that Sam raped her as well. She even recites the line that Kelly also told the police Sam said after he was through, and it’s close enough to sound like Susie is giving them some hard evidence. Words that nearly match the exact same words Kelly told them Sam said. This is enough for the detectives to arrest Sam and put him on trial. Everything happens pretty quickly in this movie, and before you know it, we are at the day of the trial. That’s where both girls take the stand and recount their stories about what Sam did to them.

When it’s Susie’s turn to tell her story, things don’t exactly go smoothly. Sam’s defense attorney, played hilariously by the great Bill Murray, calls Susie out on her story, as well as some things that happened to her in the past. He asks her about the time she went away to jail, and Sam helped her. Then he asks her about the time Sam wasn’t around, because it was the summer, and Susie needed his help again. He points out the motive, that maybe Susie blamed Sam for her going to jail, and was claiming he raped her to seek revenge. As soon as he mentions this as a possibility, Susie crumbles, and admits the accusations are a lie. On top of that, she incriminates Kelly, telling everyone that Kelly said they should work together to do this to Mr Lombardo.

With this confession, Sam is immediately acquitted. But it’s not enough. His reputation is ruined. He even tries to prove the point to his principal that he couldn’t come back to school even if he wanted to, when he runs into Kelly and she attacks him. This doesn’t really show that he can’t work his job again, since it is the same student who the other problem was with. It just shows that the one student is crazy. But Sam uses the situation to his advantage, and quits working at the school. He doesn’t need money anymore because he has decided to sue the Van Ryans for ruining his reputation. That’s when Sandra Van Ryan (Kelly’s mother,) and her attorney (played by Robert Wagner, in a brief but memorable role,) go to visit Bill Murray and make the payment. Apparently she’s using Kelly’s trust to pay off Sam, and that’s why Kelly attacked him at school.

By now, we are at about the halfway point of the film. A whole lot has already happened. Relationships have been established, a crime has been committed, and the trial and solving of the case has also taken place. For most movies, this plot would cover the entire duration of the film. For Wild Things, it’s only half. The story might seem like it has reached an ending, and all loose ends have been tied up, but starting now is when the twists start to happen. We learn that there is a lot more to this story than we know, and in many ways, the second half is about looking at the events from the first half in a new way.

Wild Things doesn’t just feature one or two twists, but instead it features an entire half of the movie filled with twists. The second half is so dark and surprising, that by the time the movie is over, all answers still haven’t been given yet. And so rather than leaving us not knowing some things, this movie uses the credits to plug in the holes and help fill in the missing pieces. It’s a very smart move that shows us moments from the first half (and even earlier,) that we now get to see from a new angle. Between the mystery, the twists, and the reveals and explanations, this movie has a lot going on. It also has just the right amount of steaminess, including a brief threesome, to give it some real edge. Wild Things definitely overdoes it when it comes to the twists in the second half, but even still, it’s a hell of a ride.