Will, Chris, and the Slap Heard Round the World 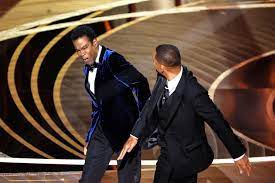 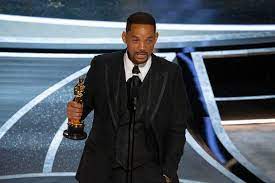 The ugliest awards show moment of all time just happened. And it wasn’t just at any awards show. It was the Oscars, the biggest night in Hollywood. And it featured two A-List Stars. Will Smith and Chris Rock. And it should never have happened.

The moment that everyone has been talking about for over a week now, and that will now mark Will Smith’s career for the rest of his life started with a joke Chris Rock made about Will’s wife, Jada Pinkett Smith. Chris Rock was on stage, doing his thing. He’s a standup comedian and he was making a joke. It wasn’t even a bad joke. Not really.

The joke was about Jada’s hair. She is bald. It’s because of alopecia, which is a condition where someone loses their hair. But let’s be honest, if Jada really cared about how this made her look, or had a problem with it, she could wear a wig. Just four days earlier she did an interview all about her hair and how she’s proud to have it the way it is. Apparently not proud enough. Rock made the joke which compared her to Demi Moore in GI Jane, a movie where Moore’s head is also shaved. Will Smith can then be seen in his seat laughing. It is Jada who isn’t laughing. Her smile, from the joke before, instantly fades after this new joke about her hair. But Will keeps laughing. Which is definitely worth noting.

What all of this means is that Smith either thought this was funny, or was in a good enough mood to not let it bother him. Maybe it was a nervous laugh. Either way, his wife most certainly was not laughing. Rock went on, but instantly stopped as he noticed Will Smith walking up onto the stage. And Rock started laughing. He probably thought Will Smith was going to make a joke, or jokingly ring his neck or do something funny. Nope.

Will Smith smacked Chris Rock across the face. Just like that. And then he turned around and walked back to his seat. But it didn’t end there. Smith sat down, as the audience laughed, thinking the whole thing must have been a gag and a big joke. Only it wasn’t. And then came the moment when they found that out. Smith began shouting curses from his seat at Rock. And when I say shouted I mean the whole place was silent other than Smith screaming, and everyone listening. “Take my wife’s name out of your f-n mouth,” he screamed. When Rock began to respond, Smith repeated this, only louder and even more angrily.

Rock shook it off and continued on with the show. Smith continued to sit in his seat beside Jada. About forty minutes later he won the best actor Oscar. He got on stage and made a ridiculous speech about how he is a protector of women and a vessel for love. The whole thing was crazy. The slap, the shouting, and the speech. Also crazy was the fact that Smith was allowed to stay at the show after the slap. That he was allowed to get on stage and accept his award as if nothing had happened. As if he hadn’t just assaulted someone on live, public TV. And then there were all the celebrities, giving him a standing ovation. What? What the hell was happening?

Now, about a week later, there’s a lot of reflection to be done. Everyone has weighed in on it by now, and given their interpretation. Here’s mine….Will Smith is an entitled jackass. Everyone gets insulted from time to time. Especially celebrities. This was an awards show. You expect yourself to get insulted or roasted at these. It’s just what happens. Ricky Gervais is the master of it. So there was no surprise about Rock’s joke. Some people talk about the alopecia angle, and how Rock was making fun of a health condition, but Rock most likely didn’t even know about that. Jada is choosing to wear her hair (or lack of hair,) like that, instead of donning a wig. She makes it look good. If it’s not a style or a choice, it certainly looks like it is.

And as far as alopecia goes, it’s not a life threatening disease or anything like that at all. It’s just something she has that means her hair doesn’t grow perfectly. A huge percentage of people have it. People talk about how Rock produced the movie Good Hair, about women’s hair, so he should have known better. Really? Because he produced the movie, that suddenly makes him an expert on women’s hair? These conversations are so stupid that they represent the dumbing down of America. None of this matters at all.

The point isn’t what Rock said. It’s what Smith did. And it starts with Smith’s reaction to the joke. He was laughing. And that’s worth noting, because it was only Jada who wasn’t. The camera never showed Smith turning to Jada and seeing her reaction, but clearly that’s what set him off. So now let’s talk for a moment about the relationship between them. They have an open relationship. They’ve been vocal about it. Jada in particular has had a relationship with another man while being married to Smith, and has admitted it, and talked openly about it. Smith has most likely been with other women too, (maybe Margot Robbie,) but none of this has been proven or admitted or out there in the open.

So then the question is how does Smith feel about Jada’s affair or relationship with this other man, and how does he feel about Jada being so open about it. Probably not too good. If you watch their Red Table Talk, the show Jada hosts and the episode in which she brings her husband on the show to talk about her affair, he isn’t exactly happy. And all of this matters. Because most likely Smith feels like less of a man because of it, and like he needs to prove himself to Jada. Which probably triggered him to jump out of his seat and go on up there and smack Rock.

But regardless of the reasons why he did it, he should not have done it. It absolutely never should have happened. Celebrities know they have to take jokes at their expense. That’s the nature of the business. In fact, most people in this world know that. Someone makes a joke about you, and you don’t have to like it, but you also don’t run up to them and hit them. It’s assault. It’s a crime. And this is where the entitlement part comes in.

Imagine being Smith, and you hear this joke and see Jada not happy about it. She’s not crying or anything, but just not laughing. And something in your mind tells you to jump out of your seat and go after the guy who made the joke. So now you’re on your feet, headed up the stage, and the question is did Smith know he was going to smack Rock as he was getting up there? Was it premeditated?

Either way, one has to wonder what he was thinking as he approached the stage. He clearly couldn’t turn around in that moment and go back down. But he could have also had some fun with it. Swung his arm over Rock’s shoulder, maybe in a threatening but comical way, and said something like, “We don’t talk about Jada,” (a reference to the popular Encanto song, “We Don’t Talk About Bruno.”)

Rock handled the situation perfectly, joking about it, “this is the greatest night in the history of television.” But Smith came off as a psychopath, torpedoing his career. And here’s the craziest part. He was allowed to stay there, and accept his award. How is that even possible? Smith, on the biggest night of his career, when he was the favorite to win the biggest award he possibly could, does this? The whole thing is absolutely nuts.

We will definitely be finding out more as time goes on. At some point we will hear both Smith’s and Jada’s accounts of what happened. In detail. We will also hear Rock’s. For now though, we just have this moment. The wildest moment in awards show history. And we are all just waiting to see what ends up happening as a result.