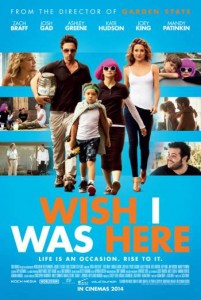 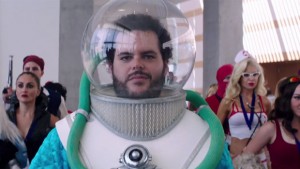 A movie that wants to be the more serious and grown-up version of Garden State, but forgets the free spirit and humor that made that movie all that it really was.

It’s unfortunate that this film is Zack Braff’s follow up to Garden State, because that movie succeded on so many levels (including one of the best soundtracks of the past twenty years,) that nothing can really match up. But judged on its own merit, Wish I Was Here is still not a very good film. It wants to be a drama disguised as a comedy, and it doesn’t work very well in either camp. The comedy isn’t funny and the drama is bang you over the head with symbolism and insisting that the movie is deep, kind of stuff. There’s only so many times we can here the speech about Aidan and his brother pretending they were superheroes when they were little, and now realizing that they’re not. The movie has two storylines going for it. The first is about Aidan’s father getting ill and taking a turn for the worst. That leads to the second storyline, where Aidan has to start spending more time with his kids, home schooling them. The first storyline is the usual, predictable routine, including the son who won’t come to visit his father. The second storyline is the more interesting one, only it isn’t given nearly enough attention (we only get one scene of him trying to teach his kids at home.) The movie has some elements that work, like the brother, played by Josh Gadd, but even his comic con / get the girl storyline is shortchanged. There’s just too much going on here, including a strand about Aidan’s wife being sexually harassed at work, that goes nowhere. This movie wants to be too many things all at once without giving the proper attention to anything in particular.

Wish I Was Here is Zack Braff’s directoral follow up to Garden State. That movie was made a full decade earlier and was a fantastic film about being an adult, but still feeling like a kid. It was a movie about adventure, romance, and figuring things out. Wish I Was Here wants to be the more mature version of that film, but it doesn’t pull it off. The movie does not have the same level or energy or creativity that Garden State had. Instead, it is much more of the same kind of movie we’ve seen before, about a dying father and struggles with taking care of the kids. In Garden State, the main character, Andrew Largeman’s mother died, and that was the reason for him being in town. But that was as far as it went with the mother story. That and a back story about a broken latch which came out later on in the film. Here, in Wish I Was Here, the father dying story pretty much monopolizes the film. It is at least half of the movie, which is far more than it should have been.

The other half is about our main character, Aidan Bloom, taking care of his kids and family. Braff is smart guy, and as a writer he knows that new problems don’t just happen. They happen because of something. If this movie is about Bloom changing his lifestyle to start homeschooling his children, then there’s a reason why that has to start happening. The reason is because of the father’s sickness. Bloom’s father, played by the fantastic Mandi Potemkin, hot off his newly found success from the TV show Homeland, is sick and dying and is now forced to use his money to seek treatment and pay his medical bills.

This affects Bloom because his father has thus far been paying for the expensive Hebrew school that Bloom’s children attend. The deal he made with his father, a long time ago, is that his father can pick the school they go to so long as he also pays for it. Neither Bloom nor his wife, Sarah, (played by Kate Hudson,) are very religious at all. Their daughter, however, is extremely religious and studious, and cherishes everything that she has been learning in school. Towards the start of the movie she even has a conversation with her father about how one day she will start shaving her head and wear a wig because that is the custom for orthodox people in her religion.

Bloom goes to meet with a Rabbi about not being able to afford the school. This Rabbi has been counseling Bloom’s father, and knows of their troubles. Still, the Rabbi has no pity on this family, and instead has a sort of contempt for Bloom being an out of work actor, going on auditions instead of finding a job where he makes money. Bloom asks the Rabbi if God cares about him pursuing his dream and happiness, and the Rabbi tells him no. The first half of the movie really hits the Judaism and religious elements hard, but it doesn’t do it in a funny way the same way that a film like A Serious Man did. Instead, Bloom is more of a character that we can’t relate to. Especially not with his out of work, going on auditions, not bringing home any money, lifestyle.

The attempts that the movie does make at humor are pretty weak and forced. One example comes when Bloom is smoking weed while on a car line, after dropping off his children at school. He is in his car, and the car is still at the school with Rabbis standing on the side them. What a ridiculous time to be smoking. The Rabbis are right there, patrolling the line. Do you think Bloom’s gonna get caught? That sort of humor, or the swear jar and hearing little kids swear, is just not funny. It’s certainly not very intelligent humor. Every once in a while there’s a slight glimmer of the creative and dark edge that Garden State had, like when Bloom sees a pamphlet holder that says “this pamphlet could save your life,” and there are no more pamphlets left inside of it. But for the most part, this is a very different, much more routine and usual and dull kind of film.

After most of the introductions are done, we meet Bloom’s brother, Noah (played by Josh Gadd.) At this point, we finally get a funny character. The father is a pretty good character too, but it’s Noah who is actually funny. This is a fat guy who lives in a trailer like a slob and is totally okay with that. He’s not responsible at all and seems to have no ambitions other than creating a cool costume for Comic Con. It’s too bad Noah isn’t a bigger part of this movie. His introduction is last, and comes a decent amount into the movie, and is storyline is very one-noted. It is simply about the father and getting him to connect with his father once more.

What’s annoying is that the movie pretends like it is giving Noah another storyline, about a girl who lives in his complex, that he has a crush on. Noah wants to win her over, and by winning the contest at Comic Con, he just might have a chance. But the movie short changes the audience on this story, showing only one conversation between the two of them, then rushing the Comic Con scene (let’s just say, there’s not a single actual comic book character featured here, and not a single shot of the floor, but simply a slow motion walking scene of people in costume, and nothing more.) Too bad. That Noah story could have been one of the most interesting and enjoyable parts of the film.

But this movie doesn’t want to be funny. Not as its primary focus, anyway. It wants to be serious and dramatic, and what that ends up amounting to is really just kind of depressing. Nobody is happy in this movie, and characters continue to handle situations in the wrong way. When Sarah is sexually harrassed at work, she goes to her boss about it, and the boss does something to move the guy who is causing the problem away from her. Now, that should be enough. The problem is solved. Only this movie keeps taking it further, as if things still need to be worked out.

There are lots of problems like that. Part of it is that this movie has too many ideas, and doesn’t know which ones to choose for focussing on. Another idea that seems interesting until it is pretty much dropped is that of Bloom home schooling his kids. After one quick scene, he learns that his daughter knows more about math than he does and the home schooling stops. Instead, the adventures of him and his kids together become about test driving an Astin Martin, rebuilding a fence, and going on an overnight camping trip out to the desert. It might sound like fun, but it’s just a little too much, with none of these ideas being given any real attention. And that’s pretty much the story of this misguided film. It has a good deal of ideas, but just doesn’t know how to handle them.

When Bloom’s father calls him out on not being able to provide for his family, we finally get a real sense of confict. Then when his wife addresses the elephant in the room, saying “when did our relationship become all about you pursuing your dream,” we get it again. Great conflict, but no real resolution. And that’s about as deep as the movie gets. Everything else, like a scene of Sarah going to see the father alone, to tell him that his sons are proud, is just a lousy attempt at being dramatic. The same goes for the storyline about the brother who won’t come see his father. If the movie is headed into familiar territory and you know exactly where it’s gonna go, then there’s a problem. Garden State knew that. Compare the full day scavenger hunt scene that brought the characters into a shady hotel and then down to the bottom of a quarry and inside of an arc to the desert scene in this movie. You realize pretty quickly that Garden State was a movie with guts and ambition. Wish I Was Here is not.